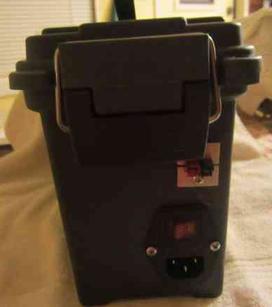 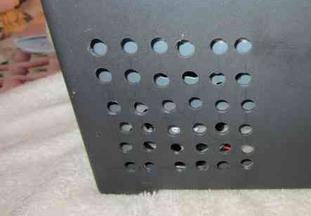 By laying out a 1/2" grid in the proper spot on the case and drilling all the holes (well, at least most of them) to the same size, a opening was created so the switching PS can draw in lots of fresh air to keep it nice and cool. I should point out that the PS is deliberately spaced about 1/4" away from the side of the box to give more room for air flow.

Here is the reason I only put in one set of Power Poles. The one on the right is a 4+1 power distribution block (which I also build.). The left side is an adapter that allows a radio with bare wire ends to be hooked up. Behind those is the 10 foot power cord.

The business end of the power supply. At the bottom  is the socket for the power cord with it's on/off switch. The fuse is between the switch and the socket in its own carrier. Above the socket is the 12 volt output which uses Power Pole connectors. You might notice that there is only one set of Power Poles. That was a deliberate choice on my part.

The entire project took only a few hours to construct and it works just fine. Another point that I should make is that the power supply only cost $21 new. The 10 foot cord was about $8, The socket/switch/fuse device cost about $6 and the ammo can was $4 at Harbor Freight. Total cost was $39. Compare that with a 30 amp PS from one of the Ham Radio Suppliers and you can see the advantage to building it yourself.Maybe I should call it assembling it yourself. It really is just wiring the parts together and securing the power supply so it doesn't bounce around.

This power supply fits neatly into the ammo can and has enough room left over to store the 10 foot power cord and the accessory 12 volt devices that provide 4 feed points and an adapter that allows a rig that does not have Power Pole Connectors on its cord. 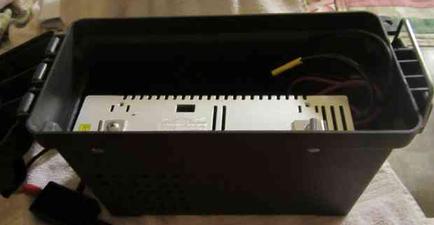 Here is the interior of the ammo can. Notice all the space available for other stuff. The PS is secured to the box in 3 places with aluminum brackets and bolts and screws 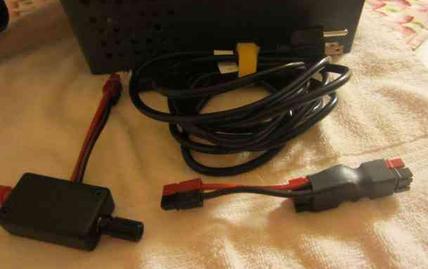 I was invited by our club president to give a presentation to the club about Go-Kits. I put together a fairly comprehensive Go-Kit using materials that I had around the radio room and in truth a couple of other rooms in my house. After I completed the Go Kit (including a spare set of clothes and food for 3 days [simulated, of course] I realized that the one thing I did not have on hand was a spare power supply that could power a 50 watt dual band radio. I began to look around for some options. I purchased a 30 amp switching power supply from Amazon along with a 10 foot power cord and a proper IEC socket and switch for the power cord to plug into. This is just like the one on the back of your desktop computer. I used it because it combines the attachment point for the power cord with an ON/OFF switch and a fuse holder with a 5 amp fuse. I also went to my local tool shop where I picked up a plastic ammo can for less than $4. 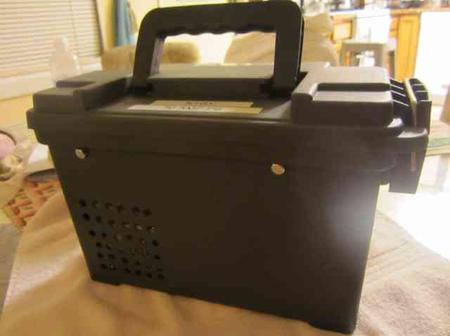