Below is a diagram for the 14 AH battery box. Note that the switch controls only the power to the voltmeter. THe diagram for the 18 AH Battery Box is similar with the addition of the cigar lighter style socket and of course only one battery. The red and black squares at the bottom of the diagram represent the Power Pole Connectors. 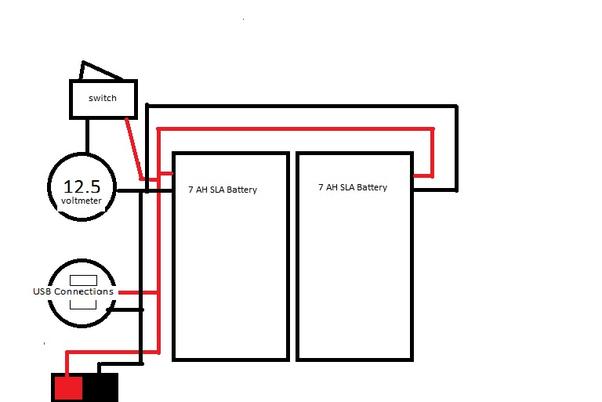 The following two pictures show the 18 AH Battery Box. The USB connectors are below the voltmeter and the cigar lighter style connection is at the bottom. 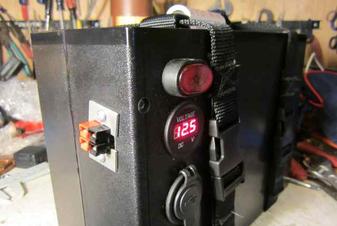 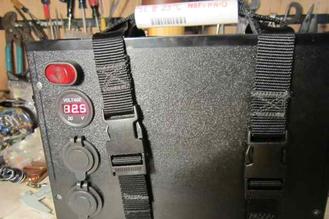 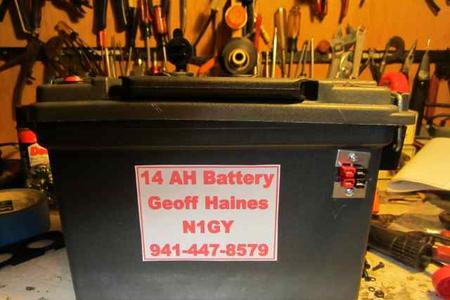 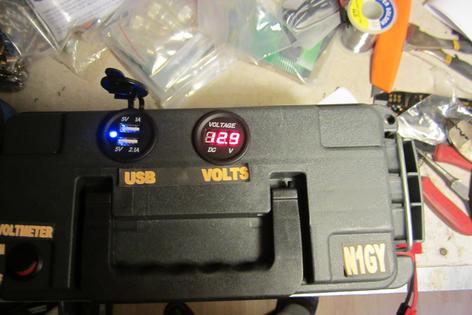 A Couple of Simple Battery Packs for Portable Ops.

When I first decided to build a portable battery pack to power my FT-817ND, I looked for an ammo can made of plastic. At the time there were none for sale anywhere, so I used a ABS enclosure  purchased from a company called Pac Tec. The enclosure was sized to contain an 18 AH SLA battery. Because the enclosure was never intended to carry the weight of such a battery, I enlisted the help of my eldest daughter to build a harness out of one inch webbing to surround the enclosure and provide a handle for carrying the package. The harness prevents the battery from pushing the bottom plate of the enclosure out. With the security of the battery accomplished, I turned my attention to the connectors that allow the energy of the battery to be used.

Quicksilver Radio Products (www.qsradio.com) sells a series of terminal devices that come singly, or in pairs or trios of connections and devices mounted in a molded panel to make installation a snap. I used the triple unit which consisted of a voltmeter, a pair of USB outlets in one housing and a cigar lighter type outlet. For this project it was better to remove the units from the molded panel and install them individually on one side at one end of the enclosure. To this trio I added two sets of Power Pole connectors on the same end. The digital voltmeter was wired with a switch in the circuit so that the meter could be shut off to save power for the attached radio.

The second unit I built used the ammo can that I searched for before. After I built the first unit, all of a sudden, the plastic ammo cans were available at Harbor Freight. I purchased one and went to my local Batteries Plus to find a suitable battery. As it turned out, the 18 AH SLA battery would not fit. It was about one inch too tall. Two 7 AH SLA batteries wired in parallel did fit so that made my choice easy.

With the two batteries inserted into the ammo box vertically back to back there was just enough room for the voltmeter with switch and the USB connection unit along with the two Power Pole connectors. The cigar lighter style connector was eliminated due to a lack of space.

To keep the battery boxes charged up I purchased a Deltran Battery Tender 800 model. This puts out 800 mA and is completely automatic. A battery left hooked up to a Battery Tender will charge up as usual and then switch to a float mode that keeps the battery topped up but does not overcharge it. I use the one charger/maintainer to keep both units fully charged by switching from one unit to the other every few days. I may buy another Battery Tender in the future to eliminate the extra step.