I finally added a picture of the completed boom and mic. You may notice the addition of a small sign to the top of the cradle with my call sign on it. The boom itself was made from an inexpensive architect lamp from Office Depot. I even managed to convert the unused lamp assembly into a 60 watt load for testing power sources and the like. Nothing went to waste. 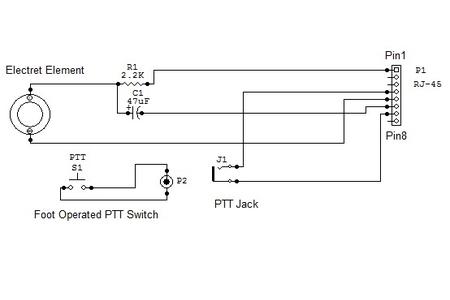 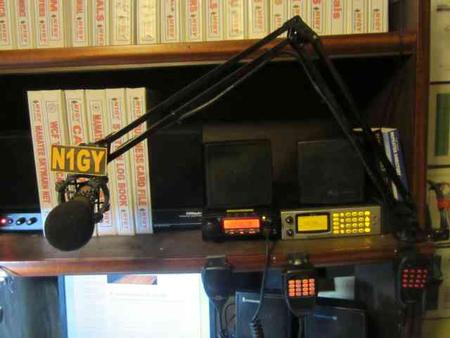 This is the circuit diagram that was inadvertently left out of this page. This particular circuit is for the IC-706 series of radios but a perusal of the circuits on other pages of this site will help you discern the circuit for your radio. If you have problems, feel free to email me via the contact page for assistance. 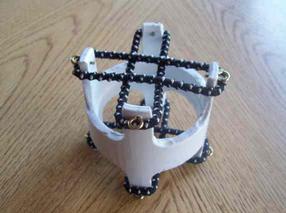 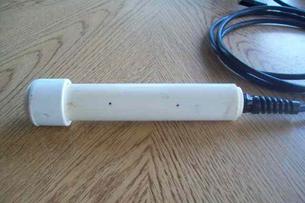 These 3 photos show the boom mic in various stages.

Top Left: The end cap with the mic element in place.

Bottom: The finished mic before paint and mounting in the shock mount 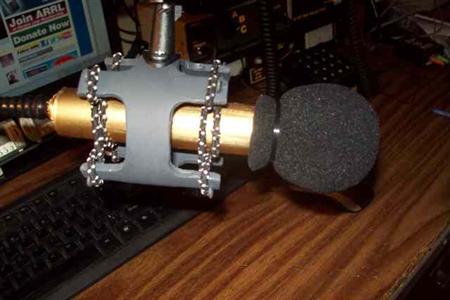 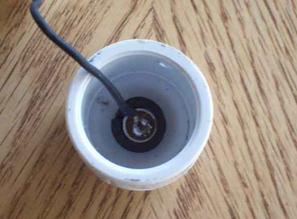 This is a project that worked out quite well and even includes a shock mount, also DIY

Here is the finished boom mic in its shock mount at my operating position. You can see that the elastic cords are twisted on all four sides of the mic body both front and rear. This adds more tension to the bands and holds the mic more firmly.

This project started out because I was looking around for something new to build. I have admired those fancy boom mics that have an elastic shock mount around them, but of course the prices of the commercially available ones would have destroyed my budget.

I do, however, know how to assemble a simple microphone using PVC pipe and fittings for the shell and an inexpensive electret element for the working part of the mic. So I did just that. I used a 6" piece of 3/4" PVC pipe and a PVC cap to create a shell. Drilling an appropriately sized hole in the cap gave me a place to put the electret or condenser mic element. The element I used had a rubbery grommet like fitting around it so the hole was sized to make a snug fit for the device.

I added the necessary 2.2 K resistor and 47 uF polar capacitor as shown in the circuit diagram below and spliced in an inline 3.5 mm jack into the CAT-5 cable so that I could bring the PTT line out to a floor mounted PTT switch operated by my right foot under the operating position desk. I used one end of a foam spool from my wife's sewing box to close up the back end of the mic shell, drilling the center of the spool out to accomodate the strain relief and the CAT-5 jumper. Once everything was wired up and working a few dabs of "hot glue" holds everything together.

Testing was an enjoyable experience since all of the signal reports I got from other hams were excellent. Sometimes I get really lucky. I picked that element at random from the "junque" drawer and it worked great. If you build this project you may have to do some trial and error experimentation to find the right one.

A foam "wind screen obtained from a local music store and a little gold paint to disguise the PVC pipe and the mic was almost complete. The next item was the shock absorbing mounting system. A lengthy perusal of the info on the Internet was very helpful. I found several YouTube videos on how to build the shock mount. I culled a design using elements from several and came up with the one you see in the pictures on this page.

The start for the shock mount was a 2 inch PVC connector from Home Depot at a total cost of $0.97. Some careful planning and then drilling, cutting and sanding resulted in the shock mount with four "fingers" to the front and another four to the back. I carefully drilled a small hole at the end of each "finger" and screwed in a small screw-eye. These are available at craft stores and are not expensive. I already had a sufficient supply on hand left over from an old project.

The next step was to paint the mount, again to cover the white PVC. This time I chose an acrylic paint my wife had on hand called "Anthracite". It is really just a dark gray but you know how the art companies love to give colors fancy names. Once the paint was thoroughly dry I added four elastic hair bands purchased (in a package of 12 for $1). two to the front fingers and two to the back fingers so that they cross in the center of the mount.

The microphone was inserted into the square at the center where the elastic bands cross. I found that I did have to twist each end of each band 180 degrees between the mic body and the "finger" that the band was attached to to make the tension enough to keep the mic centered in the mount.

The next phase was to figure out a way to suspend the mic and its shock mount over the operating position so it could be used. A quick trip to a local office supply store and I was homeward bound with an "Architect" style lamp that had an articulated arm and a base that could be clamped or screwed to a surface. I removed the lamp assembly and removed the electrical cord from the articulated arm. I had thought about feeding the mic cable through the channel where the electrical wire used to be but eventually I decided to simply wire-tie the cable under the lower arms of the device, leaving sufficient slack around the hinge points to allow the arm (or boom) to move freely.

I screwed the base down to a bookshelf over my operating position desk. Becuse of the limitations in the range of motion with the articulated arm  I had to mount the base at the right end of the bookcase to allow the mic to be properly positioned in front of the operator. These lamps were made to be moveable mostly above the base position and some allowances must be made when the base winds up higher than the other end of the articulated arms.

Testing and use since finishing the project shows it to have great audio and it is very easy to operate. If you have been wanting a boom mic for your station, why not build it instead of buying it. You will save some money and be able to say " I built it myself"