This is probably not the best photo of the system due to the shade of the trees all around the vehicle, but the important item is still clearly visible. Specifically a 22 foot mast attached to the trailer hitch of my van. 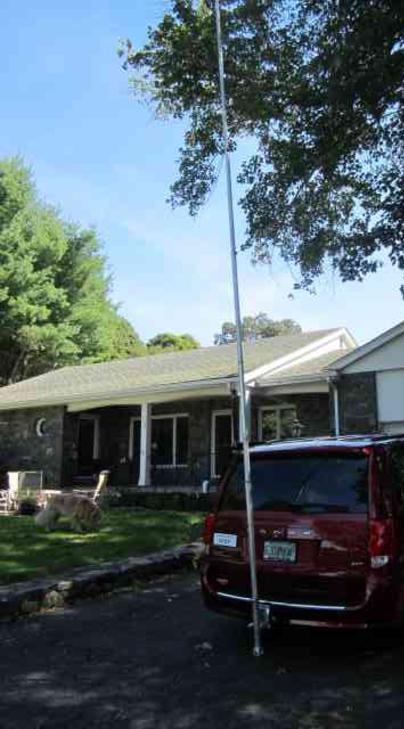 A close-up of the safety lock on the left side of the tilt system. If this is properly engaged with the back plate then even if an errant rope or coax will not be able to unlock the tilt mechanism even if the spring loaded pin is pulled. 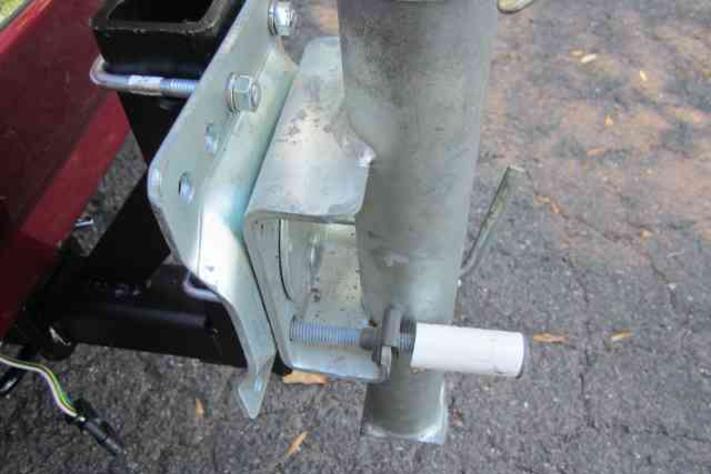 The right side view displays the spring loaded lock that when pulled allows the mount to pivot. Normally this would be in 90 degree increments but if one does hold the pin out it is possible to rotate the mount 360 degrees. 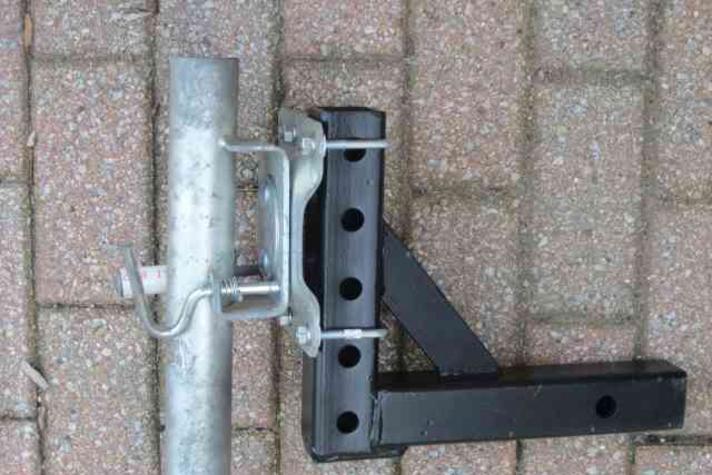 This shows the left side of the tilt mount. It attaches to the vehicle via the 2" hitch receiver at the back of the van. This view also shows the safety lock which is the white tubular handle which is turned by hand to insert the threaded portion into the base to prevent accidental unlatching of the tilt mechanism. 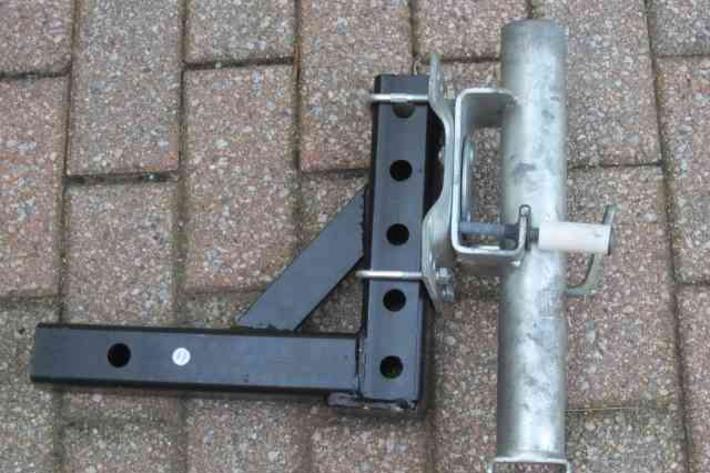 A TILT AND LAY MOUNT FOR A TRAILER HITCH

As a member of our local ARES group I am aware of the need to have gear that can enable simplex operation if the normal repeater link is down or in use by another group. One of the ways to do that without having to call out "the big guns" like the ARES trailer with its portable tower, is to have a way of elevating an antenna connected to the mobile rig in your car or truck. Such a device would have to be easily and conveniently stored in the vehicle and also be easy to set up and use. Here is my take on the problem and the solution I devised (with a lot of help from various sites on the Internet and some of my past projects)

Since my current vehicle now has a trailer hitch receiver and ball mount I wanted to make use of that capability some way. A tour through the Google Universe gained me several ideas which demanded further study. One in particular "4x4 Ham - 2" Hitch Mount for Antenna Mast"

I used the Adjustable Ball Mount from his project, I even got it on sale at Harbor Freight for $25. For the tilt mechanism I went back to an article of mine that actually wound up in the pages of QST,  and also in these pages. There I had used a tilt-over trailer tongue jack which I had stripped of all of it's jacking parts and added a screw in safety pin so that the tilt mechanism cannot accidentally be activated. I had given the tilt mount to my son last year and since I am currently visiting him and his family, I played "Indiangiver" and asked for it back. I removed the tilt mechanism from the "Big Foot" under tire base and with a pair of new rectangular U-bolts instead for the curved ones I had used for the metal pipe of the "Big Foot" base, the tilt assembly was quickly attached to the L-shaped 2" square base of the adjustable ball mount. The adjusting part that would hold the actual "ball" and the pins that hold it in place have been donated to my son's ever growing pile of trailer parts.

I also took back the telescopic mast that was the passive part of the tilt system. I removed the bottom tube which decreased the height of the mast to around 22 feet with a 12 inch overlap at each joint in the telescopic mast. A dual band (VHF/UHF) antenna was recovered and mated to the mast along with one eye-bolt that will allow the raising of an NVIS dipole antenna for HF. THe NVIS antenna can be adjusted from ground level to the top of the mast allowing plenty of adjustment for the best results. When telescoped into it's storage mode the mast is only about 4'6" long so it stores easily. The tilt mount uses the same retaining pin as a regular ball mount and also stores easily inside the car. My experience indicates that set-up time from parking the van to operating on the much taller antenna for VHF/UHF is about 15 minutes. That is 15 minutes for a 73 year old curmudgeon like me. A younger ham could probably do it in 5 minutes if he or she had everything ready.

One can easily see other options for this tilt up system. It could be attached to the bumper of a travel trailer or to the tongue of the trailer. A tilt and lay system might be the perfect answer for a ham in an antenna prohibited development. Raise it up after dark and take it down before dawn and no one need be the wiser.

The purpose for this project was to create an easily erected mast that would be attached to the vehicle and not need guy ropes except in the case of high winds. The elevation of the antenna from the nominal 4 or 5 feet on the roof of the average car to the 22 feet of the mast will make a huge difference in the range of your signal. There is one important cautionary rule. DO NOT ATTEMPT TO DRIVE THE VEHICLE WITH THE MAST RAISED.!!! I GUARANTEE BAD THINGS WILL HAPPEN.