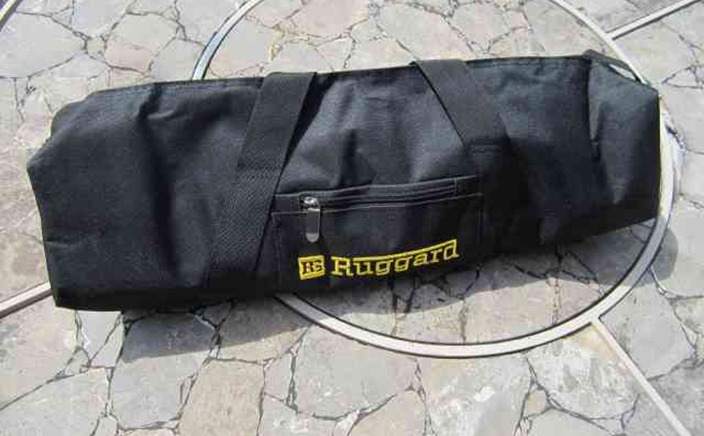 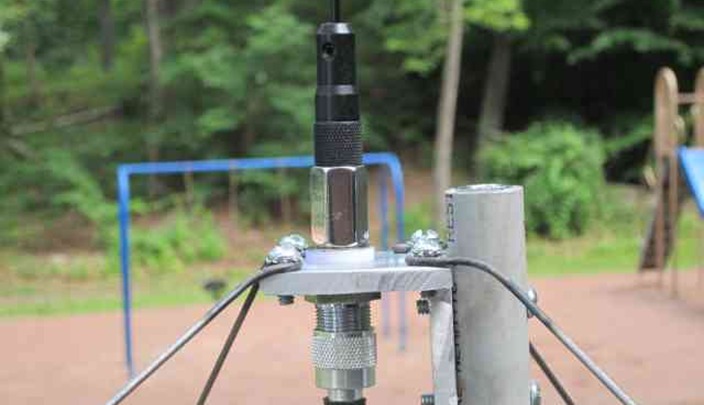 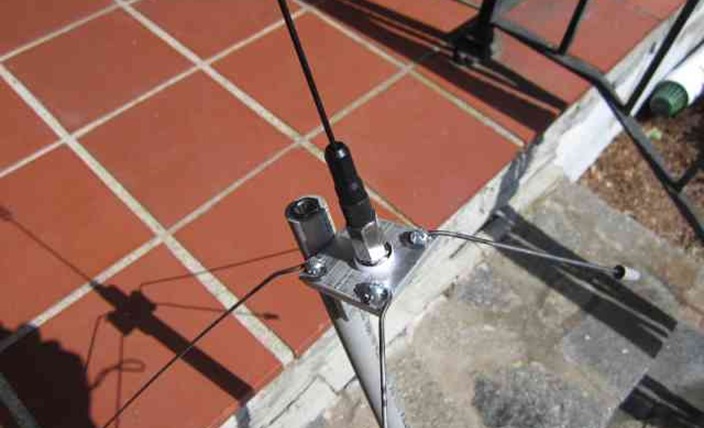 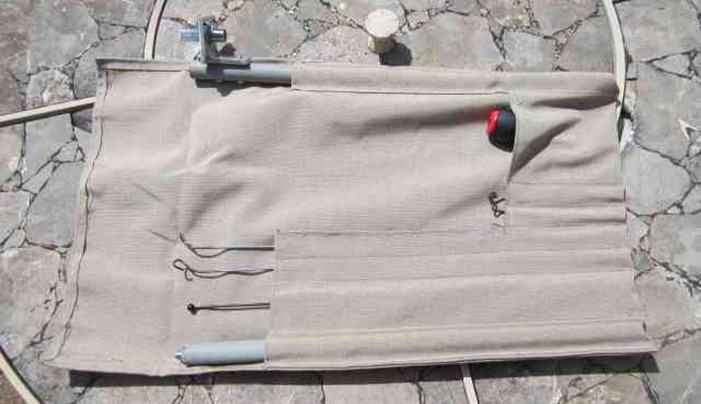 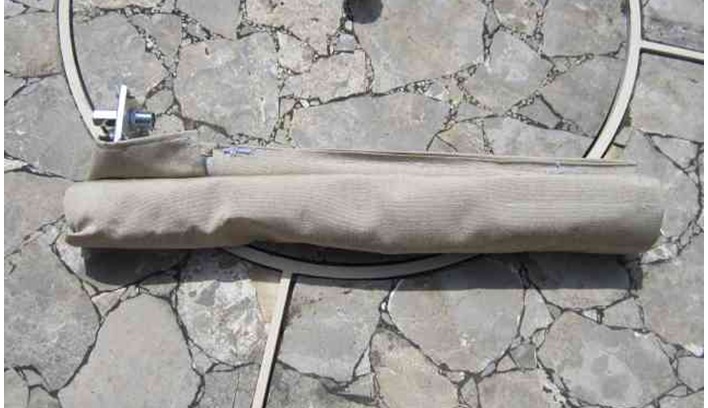 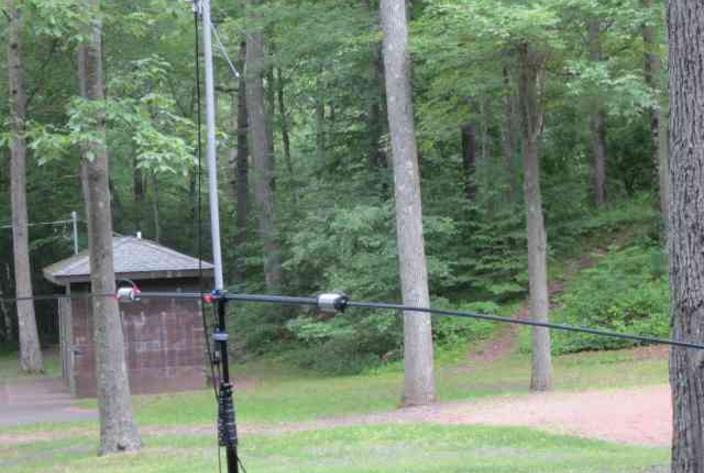 This little project came together after I purchased a Buddipole HF Antenna System and noticed that the "Versa-Tee" in the system had an extra mounting hole on the top surface. According to the instructions from Buddipole this was to be used when erecting a vertical antenna using the components of the Buddipole system. I decided to do things a bit differently.

Since I was visiting my son Steve, KC1AJC at the time, he perused the "junkpile" in the corner of his workshop and began to fashion a suitable antenna mount from a scrap of heavy angle aluminum. We could have simply gone to the nearest CB shop and purchased a mirror mount for a CB antenna but we had the raw material and he had the skills to make the project work. We drilled a 1/2" hole in ther center of the horizontal portion of the angle and four smaller holes in the corners of the same surface. These holes were tapped 3/16"-24 because that was the closest tap set we had at the time, not because there was anything special about 3/16"-24. Another two similar holes were drilled and tapped in the vertical surface of the aluminum angle to permit the mount to be secured to the mast without additional nuts, washers etc. We figured the less parts the better. The radials for our antenna were constructed from Insulation Supports made by the Simpson Strong Tie Company. These are slightly less than 24" long and made of steel. The radials wer heated at one end using a blow torch and then bent into a "U" shape with a 45 degree bend downward just past the horizontal "U". This end was made this way to slip under the four bolts in the corners of the mount. That way we never have to completely remove the bolts from the mount in order to mount the radials. Thus, less stuff to drop and lose in the field. Once the inner ends were fabricated, the radials were installed and then measured for the final cut appropriate for the band in question. The 70 centimeter radials were cut to 6" from the center stud and the 2 meter ones were cut to 19 1/4". Small wire nuts were forced onto each cut end to protect assorted body parts like hands, eyes etc. from a hazardous sharp poke.

The basic design of the antenna started out to be a variation on a design concept that has shown up in the pages of QST and on the Internet fairly frequently. It consists of four radials, two cut for one band (2 meters) and the other two cut for a different band (70 centimeters) The radiators consist of a "vee" with one leg cut for one band and the other leg cut for the other band. As we worked on the project we realized that we could simply substitute a mobile dual band antenna that was designed for both bands and used a 3/8"-24 mounting stud at it's base.

We made a conscious decision to emulate the design of the Buddipole system when it came to the design of the "mast". A 36" length of 1/2" ID PVC conduit was cut int two equal lengths and a combination of 1" long connecting nuts (3/8"-24) and 1 1/4" 3/8-24 bolts were assembled using high strength "Locktite" to form the connector at the lower end of each "arm". With another connecting nut threaded onto ther exposed bolt threads it was relatively easy to hammer them into the PVC tubes until the first nut was level with the end of the tubing. The extra nut was then removed and hammered into the opposite end of each section of PVC. At this point the arrangement was very similar in concept to the Buddipole "arms" except for the materials used and the tubing dimensions.

The next step could have been done several ways. To attach the antenna mount to one of the "arms", we chose to drill two 3/16" holes through the tubing and use appropriately sized bolts to secure the "arm" to the mount. We could have just as easily used a hose clamp or similar method. Our method does create a definite upper and lower arm or mast sections, but with one less thing to disassemble and reassemble each time we felt it was worth it.

Another trip to Quicksilver Radio (where we had obtained the connecting nuts mentioned earlier as well as the 3/8"-24 /SO-239 stud mount for the radiator) in search of a length of coax was in order. The staff there were more than kind, installing a BNC connector on one end of the coax and a PL-259 on the other. This is identical to the coax set-up that comes with the Buddipole system except that the orientation is reversed. For the VHF/UHF antenna the BNC connector is on the radio and the PL-259 connects to the antenna. For the Buddipole HF antenna it is just the reverse.

Testing was done with a separate dual band SWR meter. I would have preferred to use my Antenna Analyzer but I left that in Florida. The SWR was very good on both 2 meters and the 440 to 450 section of the 70 centimeter band. For further experimentation we took the entire set-up to Field Day with the Meriden Amateur Radio Club. The FT-817ND worked like a charm and the Buddipole was easy to set up and take down at the end of the day. Similarly, the new VHF/UHF antenna worked very well. In fact I had to crank the mic gain down a fair amount according to the reception reports I received.

A few days later we decided to emulate the Buddipole system yet again. A 22" tripod bag was obtained from a New York City supplier and a fabric roll-up made from scrap canvas like material was fashioned with the help of my daughter-in-law's sewing machine. Believe it or not, I actually did the sewing. I will admit to having to refer to the instruction book when I had to refill the bobbin, but then again how many hams even know what the bobbin on a sewing machine is? The photos below hopefully will give the reader some idea of the project.

A VHF/UHF Addition For The Buddipole HF Antenna System​