The above diagram demonstrates the simplicity of the circuit. The parts count is so small that I did not bother with a circuit board but simply either fastened the parts to the faceplate of the enclosure or in one instance, hot glued the buzzer to the inside top of the enclosure. The 9 volt battery has its own door for replacing it when it runs out of gas.

A photo of the battery door in the open position also showing the battery connecting snaps at the top of the battery. The door simply slides on and latches in the usual way for enclosures of this type. 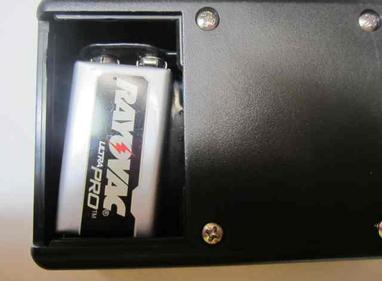 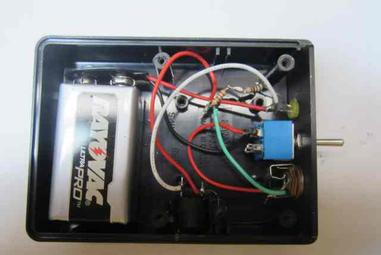 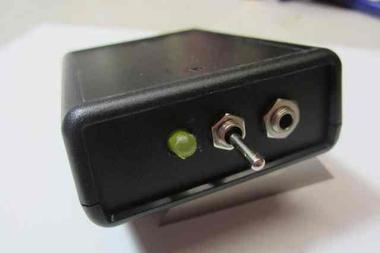 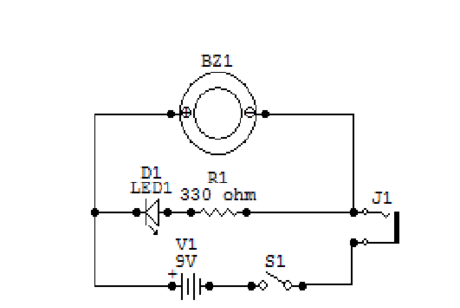 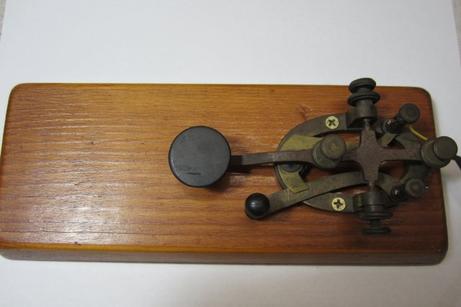 This is a view of the inside of the enclosure. I must point out that when I built it, I did not have an actual 330 ohm resistor so I kluged one up out of three 110 ohm resistors. The actual 330 ohm unit is listed in the parts list and available from All Electro-nics and I am sure many other sources. I apologize because the buzzer which is at bottom center of the photo is in shadow. The red and white wires just to the right of the battery are connected to it.

This is a photo of the J-38 key I have owned for many years. At first I had planned on making it a trophy for some club activity but the right activity never materialized. Note that it is mounted on a slab of pine, suitably sanded and stained to present a slightly better appearance than before. The wood also provides a spot for the hand to rest while operating the key which serves two functions; one the weight of the hand keeps the key from moving about and two  the hand is similarly kept in alignment with the key. The cable that connects the key to the oscillator can just be seen on the right hand side or end of the key. This key has one feature not usually seen in amateur radio use. The small shorting lever below the main lever of the key moves horizontally to close the circuit. This was needed in the early days of railroad telegraphy because the entire circuit over the entire railroad line was in effect a party line. Only one operator could use the wires at a time and if, once finished, he did not move the small lever to complete the circuit, no operator beyond his station could send anything because the wires were not connected. A ham operator would never close the shorting lever because it would send a steady tone over the radio and block all communication on that frequency. If the FCC were to be apprized of such activity, a fine would surely follow that could have paid for several new top of the line transceivers. In order to prevent that from happening without changing the look of the key by removing the shorting lever, I put a short length of heat shrink tubing over the portion that contacts the shorting contact. The shorting lever is thus prevented from operating but the look of the key is unchanged.

For those who might be interested in duplicating this oscillator and were wondering about the availability of code keys to hook up to the oscillator, they are readily available from MFJ as MFJ-550 for the plain Jane version or MFJ-553 for the fancy one with a wood base. Cost is approximately $15 0r $30 each. My advice would be get the basic one and put a longer wood base under it so your hand will rest on the base and keep the key from moving about. Keys are also available on E-bay for prices that vary from $10 to several hundred dollars but I would not recommend the latter until you gain some proficiency with the code.

Here is the finished code oscillator. The LED lights up in concert with the buzzer. The key is plugged into the jack on the left and the switch in the middle turns the whole thing off just in  case one were to leave the key plugged in and then somehow something were placed on top of it.

This project began in a way because I had an old J-38 style code key with nothing to attach it to. When I first got my amateur radio license in 1992, there was a category called Tech Plus. An ordinary Technician license did not require a Morse Code test, but if you passed the 5 word per minute test, you were a Tech Plus. I did so, on a whim but have never used the code at all. More as an exercise that for any serious plan to warm up my code fist, I constructed a simple code oscillator. No 555 timer circuits for me, I tried that and made a hash of the whole thing. No, my circuit uses a very inexpensive buzzer, an LED and a 9 volt battery. An spst toggle switch was added to save battery power and a 3.5mm mono jack provides a way to connect to a code key.

I deliberately did not include any kind of quasi-key in the design since regular straight keys are easily available from a number of sources and I think that anyone learning Morse Code should do so on a piece of equipment that they can actually connect to a radio when they have mastered the code. Otherwise one has to learn the device all over again. I also reccommend screwing the key down to a platform like a plank of wood or marble so the key will not wander about while being used and also with a place for the heel of ones hand to keep the hand aligned with the knob of the key.

Enough about the key, lets get on with the construction of the oscillator. All of the parts are or were available from All Electronics ( http://www.allelectronics.com/ )

Only about 2 or 3 feet of one end will be used for each key.