The Footswitch. This particular foot switch is very comfortable to operate in contrast to some of the units available from places like Harbor Freight which require an odd placement of the foot. They can be used by placing the switch sideways to the foot and pressing on the top of the switch but why spend over twice as much for the switch to begin with.

Here is a photo of the 3.5mm mono plug that is the termination of the cable. This plugs into a 3.5 mm inline jack that is wired across the PTT line and the chassis ground of the radio. Both are easily determined by a little research in your radio's manual or on line. The connecting cable should be sized to give sufficient length to get from the jack on the mic line to a suitable position under your operating position. I made mine a good deal longer so that I could move it out of the way when I have to go under the desk to work on all the wires and coax that live behind the said desk. 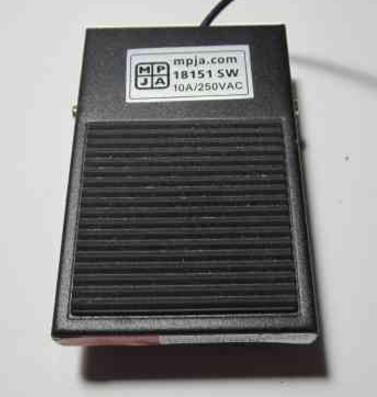 When I built my Boom Mic for my home station and posted the details on this site I forgot to include details of the foot switch I use to operate the boom mic. It is very easy to construct and much cheaper than any of the foot switch PTTs that are available commercially.

To start with a company on the East coast of Florida called MPJA (Marlin P Jones and Associates) offers a suitable foot switch for only $5.95 (part # 18150SW) This unit comes with about 6 feet of 3 conductor electrical cord un-terminated at the far end of the cord. This cord will be removed and discarded.

The foot switch must be disassembled (not hard) by removing one of the C-clips at one end of the pivot shaft and sliding the shaft out of the assembly. Be careful not to lose the coil spring between the upper and lower halves of the switch. Loosen the clip that holds the cable in place and de-solder the wires from the switch inside. There are two terminals on the end of the switch and one on the side. The switch is capable of either normally open or normally closed configuration depending on which one of the end terminals one wires in conjunction with the common terminal on the side. For our purpose we will wire it for a normally open configuration.

Once the original electrical wiring has been removed, substitute a 2-conductor cable of suitable length for your needs and terminate it with a mono-plug suitable for your boom mic. You probably will have to refer to the circuit on the Boom Mic page to see how to create a jack that brings the PTT line out from the mic cable. I use 1/8" mono plugs and jacks at my QTH. You may have to add a bit of rubber bushing around the cable where the retention clip contacts it or you can use a vise to flatten the clip so it holds the smaller cable securely. 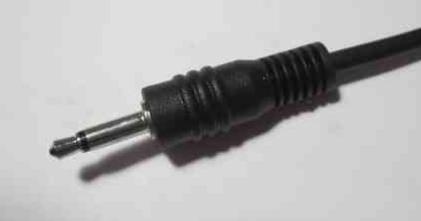