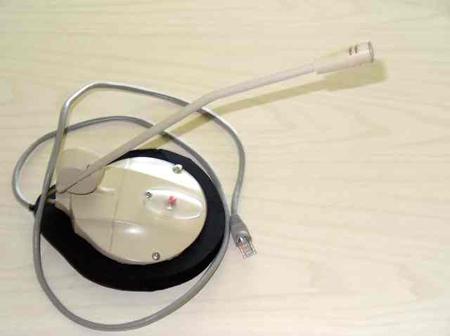 I have received a number of requests for a desk mic version of the circuit that I use for the cell phone headset adapter, so here it is.

The desk mic version of the cellular headset adapter is very easy to build. The only real difference is that the receive audio side of the circuit is eliminated since we are only concerned about the transmit side of the circuit here.
For the purpose of this project we will concern ourselves with the FT-7800. The circuit also works for the FT-8800, 8900, and 1802. Modifying the circuits for other radios on this site is similarly a snap. Just eliminate those parts of the circuit that are involved withn the receive audio and carry on.
A base will generally have to be made for the Computer desk mic we used, because it is a little too flat to accomodate the PTT switch and the other components. I used a donut cut from a pine board because I had the material and the tools in hand, but other materials can be used. Just do whatever works for you to elevate the base of the PC desk mic about 1/2 to 3/4".
Drill a hole through the back of this homebrewed base to accept the cable that comes from the radio mic connection. Something around 1/4" should do fine.
In the case of the FT-7800 we will use one half of a 7 foot RJ-12 cable. These are flat telephone style cables with a male modular connector at each end with six contacts and six wires in the cable. Since we are only using one half of the cable it really doesn't matter how it is wired. Just make sure you know what color wire is used for Pin 1, Pin 2 and so on, when it comes time to wire the circuit together.
Cut the cable from the mic element so that it can be wired into the circuit neatly. There are only two wires in the cable from the PC mic, even though the plug on the end is a 3-conductor plug. The ring terminus on the plug is either wired in common with the tip or is not connected at all.
Follow the circuit below adding the resistors, capacitor, and PTT switch in the appropriate places. Mount the PTT switch in the plastic base of the desk mic and mount the plastic base to the homebrewed base. Paint the base to your taste and plug the mic into the mic connector on the radio. You are finished, now go and work some stations. 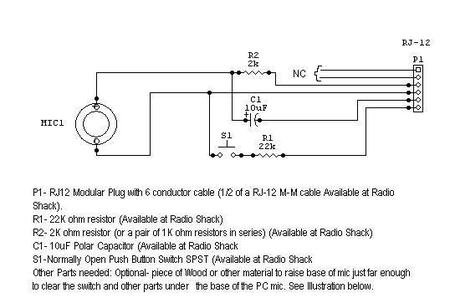