Here is a view of the cavity that I drilled, chiseled and sanded out to make room for the switch. 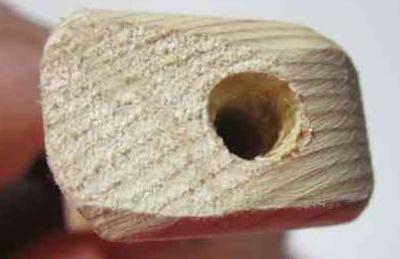 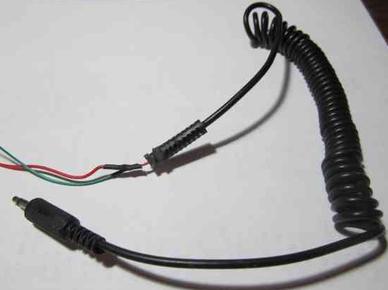 It did not take long for me to give it another go as they used to say. A scrap of 1x3" pine was used  and  a few more power tools were involved. Using my prototype as a model, I drew out a second handle and then got to work with the saber saw, my drill press and my belt sander. I even hauled out my old Dremel tool and managed to find a couple of sanding drums for said Dremel tool to make the final adjustments to the shape of the handle. A doorbell style push button switch was used with a small piece of ABS to hold the button. I countersunk the holes for the two small wood screws that hold the ABS mounted switch to the handle. An old automotive power accessory provided the coil cord and the wires were extended to get through the long hole drilled from the bottom of the handle to the cavity for the switch. The pictures below .probably explain it better than I have. The handle is now roughed out and the few components have been test fitted. What remains is the finishing of the wood and final assembly.

Two coats of stain have been applied. Tomorrow I will apply the high gloss polyurethane and hopefully I will be able to reassemble the project The stain didn't quite come out the way I had hoped but I think that is due to the pine.With a high gloss finish it should still look good.

Recently, I built a couple of hand held PTT switches out of cheap USB battery powered chargers that I bought for $1 each at a local discount store. The size of the enclosure was right and so was the price. After construction however, it was apparent that they were not the right shape or texture to be ergonomically functional. Back to the drawing board.

I even called Heil Sound because I knew that they make a hand held PTT switch called the HS-2. I wanted to just buy the housing and use my own already assembled internals. Unfortunately, the price for the housing was the same as for the entire switch and I would still have to modify it so that was a NO-GO immediately.

Three coats of Fast drying Polyurethane later (and 24 hours). Tomorrow hopefully the poly will be dry and I can reassemble the PTT switch for the final time. I also just built a little gadget to allow the use of one PTT switch for two radios. Nothing fancy, just a DPDT toggle switch to feed the PTT signal to either of the radios depending on which way the switch is thrown.

Finally, the finished product. Three coats of polyurethane were necessary to get the shine I wanted, but it was worth it. The difference in color from the previous photo is a result of no flash versus flash on my camera.

This is the coiled cord I took off the cigar lighter plug that is a 5 volt supply. I saved the plug itself and the supply for a later project. The red and green wires were soldered to the original wires to extend them all the way through the handle. A 3.5 mm mono plug was soldered to the other end to plug into the remote PTT ports on my headset adapters. Some hams prefer to use a foot switch and keep both hands free to write in their logbooks but I never developed that warm fuzzy feeling about foot switches. I do have one connected to my boom mic but I rarely use it.

Here is the roughed out handle. It still needs a lot more sanding and finishing before it is done

This is the push button I have used on several PTT projects over the years. I found them at a Home Depot. They are a bit larger than other push button switches available but they have some give in them which tactile type switches do not. The connections are screw terminals but I do not mind that.