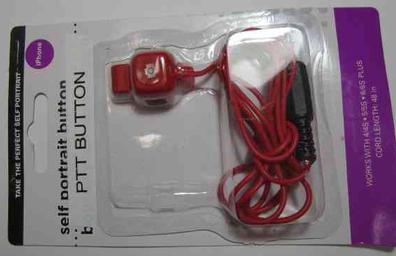 The finished plug at the end of a 48" cable ready to be plugged into a suitable jack to control the PTT function of your favorite radio. 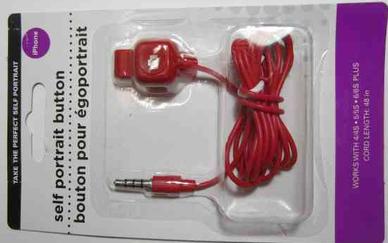 The next move is to remove the "Self Portrait Button" from the packaging and disassemble the unit.

Oh Yes!, I forgot to mention the price at the store. It cost me the grand total of $1.00

This is a photo of the original package as it came from Dollar Tree. As you can see it has a TRRS plug suitable for a smart phone. The only external change will be to the plug which will be replaced with a 3.5mm mono plug.

Here, the device has been separated into it's component parts. The unit simply pries apart as there is no glue involved (so far), just small pins that fit into corresponding holes. 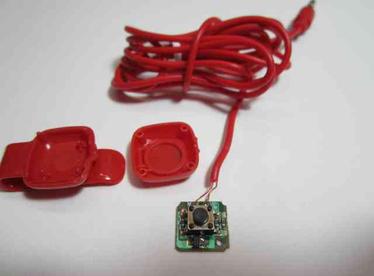 ​A Handy PTT Switch That Came From Dollar Tree

As I mentioned on the Updates Page 2 page earlier, I found a neat little project at my local Dollar Tree store recently. It's original name was "A self Portrait Button" otherwise known as a "Selfie Switch". It is meant to plug into a smart phone so that one can take ones own photo while unable to hit the usual shutter button because the screen is facing away from the user in order to aim the camera lens at the user. Of course that still doesn't allow the user to properly frame the picture. Thus a device which is pretty useless in it's original purpose can provide a pretty good hand held PTT switch with a bit of reworking.

Here is the finished PTT Button. I even managed to re-use the original packaging. I plan to sell some of these or include them as an option with the headset adapters that I build for sale. I use an identical unit as the one in the pictures with the headset and adapter that I use every week on the nets that either act as Net Control for or check into. So far it has been a wonder, very comfortable and easy to use.

Here is the 3.5 mm plug taken apart and with the cable inserted and soldered to the two contacts center and sleeve.

I then un-soldered the tactile switch from the circuit board and also detatched the cable from the board as well. Having done that, sorry no picture of that move, the circuit board is inverted. The bottom, now top of the board is completely clear of anything. The board can now be placed back on the two small pins in the interior of the plastic part with the plastic clip on it to the left in the photo above. The wires that lead to the plug at the other end of the cable must be un-soldered from their original locations. The solder tabs of the switch should be bent out sort of straight so that the body of the switch sits flush on the printed circuit board's empty surface. If this is not done, the push button of the tactile switch will be pushed down by the enclosure and switch plate (center of the picture above) A small dab of hot glue will hold the tactile switch in place in the center of the empty surface of the PCB. At this point we can re-solder the wires we took off earlier to the two switch legs on the same side of the switch. Now we can re-assemble the enclosure around the PCB and test the switch to make sure it operates properly. Next we will work on the other end of the cable.