The IC-706MkIIG as a "Portable" Station.

Recently, I wrote in these pages about operating Railroad Mobile at the Florida Railroad Museum. One of the prime movers at the museum is also a ham operator and in our conversations he mentioned that the Museum hosts a WWII reenactment in November every year. He wondered if our club would be interested in manning a Special Event Station during the weekend of the reenactment. Of course I said yes, figuring that even if no one else wanted to do it, I sure did. The next step was to come up with a suitable station.

The radio I used for the Railroad Mobile contacts is a 25 watt dual band mobile rig powered by a gel cell battery and feeding a small mag mount antenna. This worked quite well operating into a repeater for local contacts, but something else was needed to operate on HF as well. A check of the stock of suitable radios available on E-Bay resulted in the purchase of a late serial numbered IC-706MkIIG. The radio showed up on my doorstep in record time and turned out to be in fine fettle. I programmed it to have the same host of frequencies as the 706 in my car.

Next was to house the radio and a suitable autotuner in some kind of an enclosure that hopefully would not look out of place during the reenactment. I found a Swedish Army optics box on line and the measurements seemed to fit the bill. When it arrived, it was gutted to remove the plywood dividers inside and the 706 and the iC-100 LDG tuner were shoehorned into the box. A hole was cut into the side of the box so a 12 volt fan from a computer could be mounted to circulate outside air through the box to keep the electronics relatively cool. The exit for the air is a 3/8" slot at the top of the front panel.

A front panel was made of ABS plastic to house the control head of the 706, a small external speaker, the connections for the coax runs to the HF and VHF/UHF antennas, and the connections for external power and RF ground. In addition a 8.5 x 11 copy of the US Amateur Radio Bands from the ARRL was adhered to the inside of the lid of the box.

Another container, this time one that used to hold 40mm grenades was purchased from a military surplus dealer, no grenades included, thank you, to hold the other parts of the station. Runs of coax, power lines to feed the radio setup from a car battery, another to connect to the power supply, the 30 amp switching power supply, an aviation style headset and the adapter to connect it to the 706, plus the ground lead to connect a ground rod to the station. Unfortunately, the container has not arrived as yet so I will have to add that picture later. In the meantime, here are a few pictures of the radio and the headset with the adapter. By the way, the circuit for the adapter comes from the July 2003 issue of QST on page 59. I actually built two versionsof the adapter. The first was a circuit that was suggested as a "better" solution to the problem but it proved to have a weak "hum" in use. The second used the original circuit using just an impedance matching transformer and proved to have much better audio into the 706. 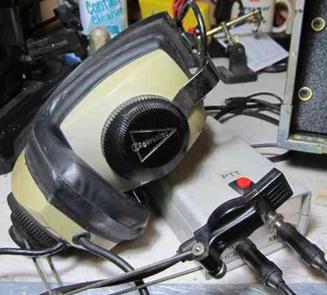 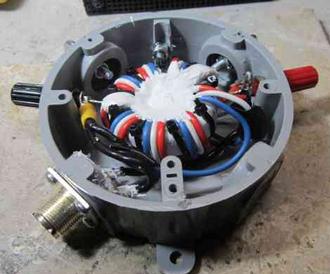 In deciding what kind of antenna to use for the WWII reenactment I considered several aspects of the event. I wanted an antenna that was very easy to set up, and that took up as little space when packed as possible. After looking around on the Internet I settled on an end fed antenna that used a 9:1 Un-Un to reduce the very high impedance found at the end of a random length wire to a level that a decent antenna tuner could handle. I considered buying such an antenna but eventually decided that building one from scratch would be an interesting project.

With the decision made, I ordered two T200-2 toroids made of powdered iron by Micrometals from JPS Supply in Texas. While awaiting their arrival, a water-resistant enclosure was sourced at the local big box home improvement store. I also bought three eye bolts, one for hanging the device from a support and two to provide strain relief for the antenna wire and, if needed, a counterpoise wire in the opposite direction. I decided to use multi-function binding posts to attach the wires to the Un-Un after clipping the wires into the  strain relief eyebolts. In a last minute decision, I stopped at my local electronic supply house and added two banana plugs (one red, one black) so the connection of the wires to the Un-Un is fast and basically "plug and play". Couple of photos below show the interior and the exterior of the device. 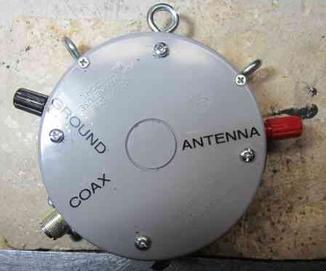 Above is an overall shot of the radio box showing the poster in the lid. Clockwise to the right is a closer view of the front panel and below that a shot of the aviation headset with the adapter ( the grey box with the plugs stuck into the jacks on the front of that enclosure.

An interior shot shows the coax runs, power supply with ac power cord,the antenna, an end fed long wire and the aviation style headset and adapter we plan to run the station with if the noise levels become too high. The one item that does not fit is a common mode choke for the antenna coax. Oh well, I guess I will just have to wear it like a watch until I get it set up. 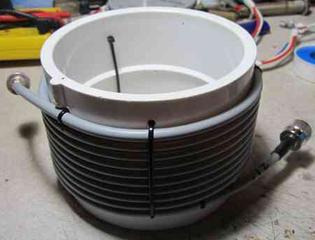 Here is a picture of the common mode choke. It is built on a 4" PVC Scedule 40 connector with about 20 feet of RG-8X coax wrapped around it and secured with zip ties at both ends and at several places around the circumference of the unit. 25' of coax will connect this to the antenna and another run of coax will connect the choke to the radio. Just a bit too wide for the ammo can. 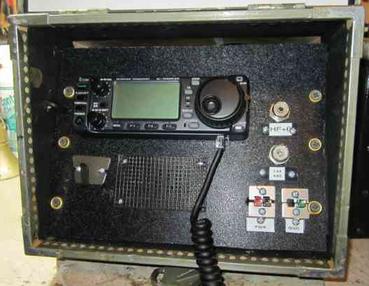 These two photos show the interior and the exterior of the home built Un-Un. I used windings of 14 gauge stranded wire because that is what I had on hand. I did check with the ARRL HQ lab to make sure that stranded wire was OK to use. The toroid is secured in the enclosure by a liberal application of Locktite Seal and bond caulking, which was also used to seal up the back of the SO-239 (the coax connection). In actual use I plan to use a 4' ground rod to secure the UN-UN and hopefully place the far end of the antenna in a tree. I do have a 22' telescopic mast in reserve. The reports on the Internet are uniformly good on the performance of the antenna so my expectations are more concerned with the propagation on the day than with the antenna's performance.

A couple of days later I realized that I had not made provision for VHF and UHF antennas and coax. This was quickly remedied by re-loading my dual band Arrow style J-pole and antenna mast into the vehicle. I took them out when I went on vacation, time to put them back. I also sorted through my various  coax runs and put together a package that will allow me to run both antennas at the same time. I may even have to get another ammo can to put all this extra stuff in. Since I am unsure what the vehicle access may be at the museum, I am also going to acquire a patio umbrella stand for the base of the mast . The mast will, of course, be guyed with 4 one inch x 15 foot guy straps to ensure it stays up. I also have a 20 foot telescopic "crappie pole" to use as a support for the other end of the HF antenna if need be. This project is turning out to be a tad more expensive than I first planned but we only go around once on this world so as some say "Keep calm and keep transmitting"

Newly arrived: An old 40mm Ammo Can has been pressed into service as a carrier for all the gear needed to make the radio above operational. 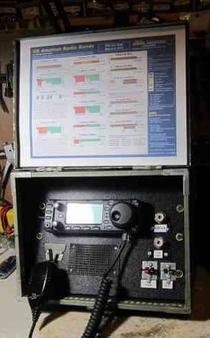