The latest addition to the mobile system is an LDG IT-100 automatic tuner. This will be used with an outside dipole or other antenna when operating from a fixed location such as a Field Day ot public service event. In order to enable this tuner a new harness had to be designed because both the tuner and the screwdriver antenna controller both use the 4 pin Molex connector on the back of the IC-706. This harness consists of three 4 conductor cables with appropriate Molex connectors on the outer ends terminating in a 4PDT switch to select one or the other to feed to the IC-706. My first attempt used two DPDT switches and while it works fine, the idea of using two switches to do one function kind of ate at me. My next iteration was to use two DPDT relays controlled by one switch. I also made this one a bit more compact by placing the Molex connectors right on the enclosure. This one is not quite done yet while I look for the needed connectors. It will also have to be powered by 12 volt DC to operate the relays. No pictures yet until I finalize the harness. Then I assure you ,I will add the photos without delay.

Well, the switch mechanism for connecting the IT-100 was made redundant when I switched to a new Screwdriver antenna controller. The only 'New" bit of gear is that I have added a "dash-cam" to the windshield of the van behind (or perhaps ahead of) the rear view mirror, I guess it depends on your point of view. Seems to work OK but any extended time with the sun shining on the camera lens will cause the iris to close down so much that everything recorded is just blacked out. 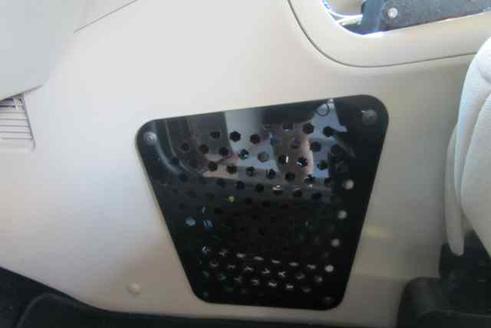 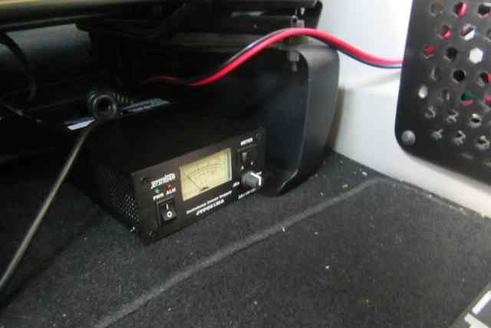 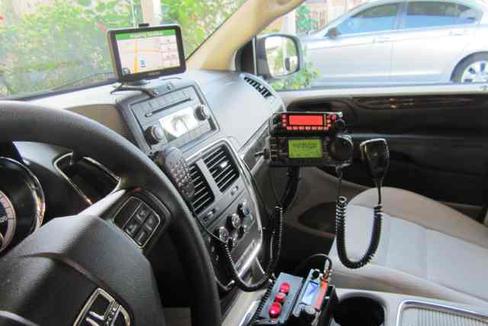 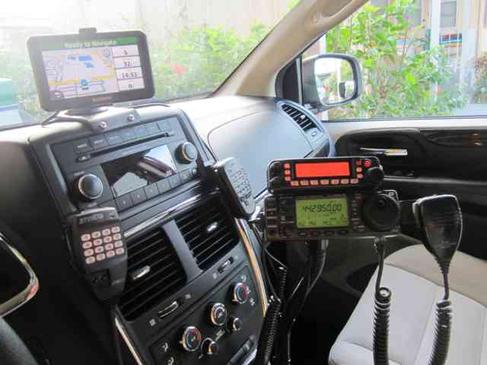 This is a view of the receptacle from which the scooter charger and the power supply in the above picture get their power. The receptacle, which has a 30 amp circuit breaker installed in the circuit, is wired to a plug that sits in the windshield wiper tray at the front of the vehicle. A short extension cord connects that to a CGFI outlet on the house for charging the scooter. A long extension cord which is carried in the van can connect the system to a genset or if available, an outside AC receptacle. The system allows me to run the radios for an extended period without having to keep the van engine running.

The picture to the left shows the radio and navigation system as it is currently set up. There are changes made on a semi-routine basis as the needs change 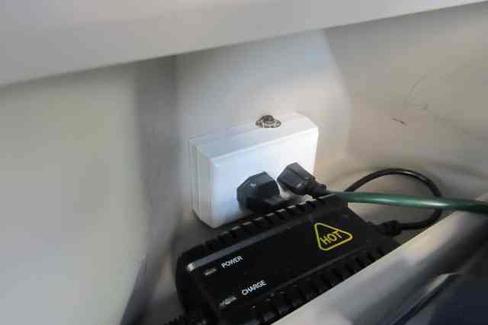 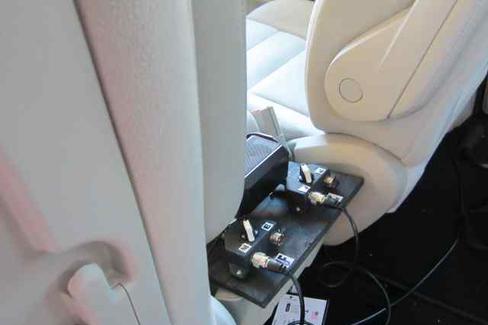 This photo shows the latest addition to the complement of radios in my van. The FT7900

control head is mounted just above the IC-706MkIIG head and the main body of the new radio resides in the same storage area as the 706. The only parts I had to construct  were the mount for the control head and a short extension to move the mic connection from the right side to the left side of the control head. This allows all three mics to be accessed without getting tangled in another mic's coil cord.

Here is the latest addition to the package. The two coax switches are mounted on a small piece of 1/2" plywood and connected on the input side to the HF and V/UHF coaxes coming from the IC-706MkIIG. The connected outputs go to the mobile antennas mounted on the roof of the van. The unconnected side of each switch is available to connect to coax runs that will terminate at the top of the 22 foot mast that can be erected at the rear of the van.

The photo to the left shows the acrylic "grilles" that were custom made for the van. If you compare this picture with the third picture from the top on this page you can see what the grilles disguise. There is a similar grille on the other side of the console with a slightly different shape to allow for the base of the stalk mount that the 706 control head is mounted on.

Here is the new power supply under the passenger seat in the van. Unseen in this picture is the switch in the upper middle of the grille on the right side of the picture which selects either the car battery or the power supply to power the radios and other items in the car.

This photo shows the custom mount I had made by a custom fabricator in stainless steel. It is basically akin to the corner of a box with one side trimmed to fit the contour of the hatchway and the other two surfaces cut to allow access to the stud mount that the antenna sits on. The ferite chokes on the coax are secured to the body with double-sided tape to keep them from abrading the paint. The choke on the control cable does not actually touch the body of the van so no problem there. 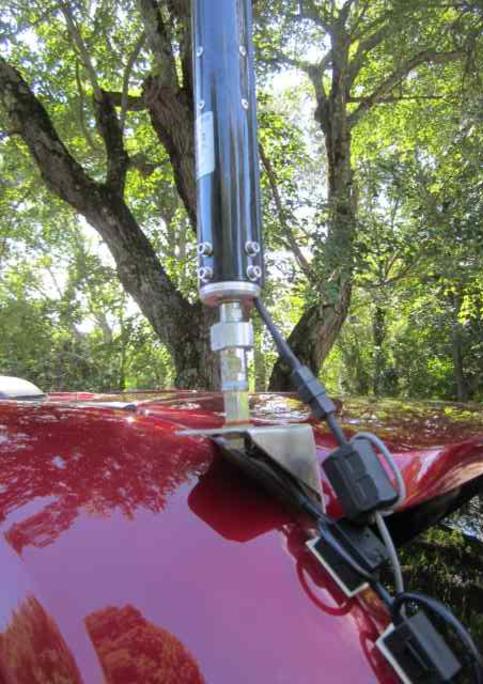 The Turbo Tuner II can be seen peeking out from under the drivers seat. The cables from it to the 706 go through the drawer compartment, the cables to the antenna go beneath the carpet and the lower side fascia to the antenna at the left rear corner of the van. The Turbo Tuner has since been replaced with a West Mountain Controller that is mounted under the 706 control head 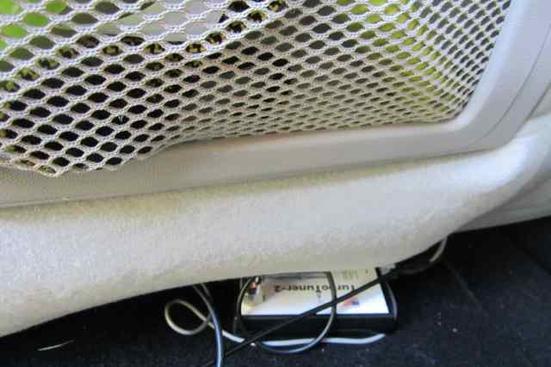 I built a simple mount that screws to the radio surround and eliminated any chance of the GPS taking flight. At the bottom of the picture you can see where the mic hangers are mounted. Again this is a easily replaced piece of trim around the AM-FM-CD radio that came with the car. 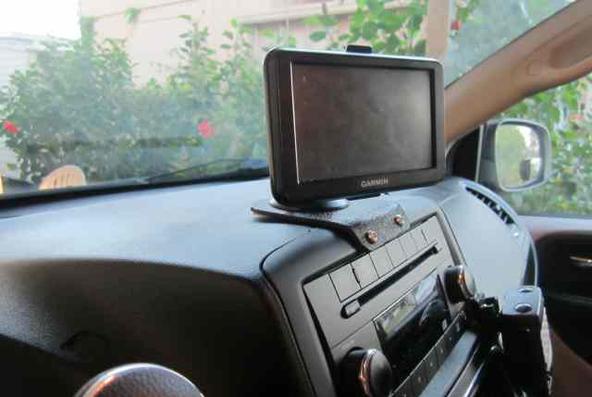 This shows the lower storage bin from the drivers side. You can see the open panel at the top of the compartment and also (unfortunately) the maze of wires erupting from the area in front of the drawer and under the spot where the 220 radio and switchbox are situated. This will soon be hidden behind custom made grilles that will cover both the left and right openings where the 706 is positioned. Right angle coax connectors were added after this photo was taken to place the coax runs inside the storage area. 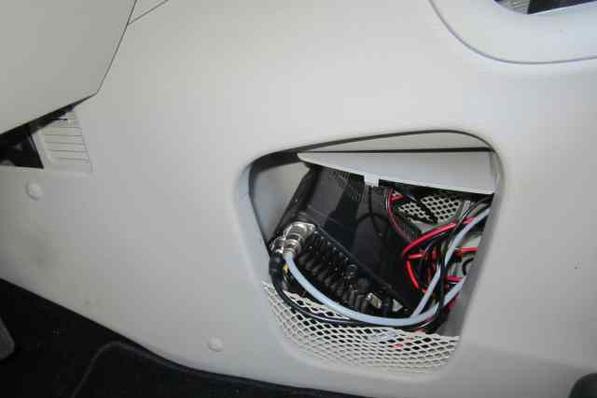 The control head for the 706 is mounted on a rigid stalk which is secured to the side of the console instead of the front inside seat bolt. This way it does not interfere with the adjustment of the seat.

This photo shows the 220 radio and the switch box in front of the cup holders and the CB radio at the back. The CB is a temporary install for long trips only 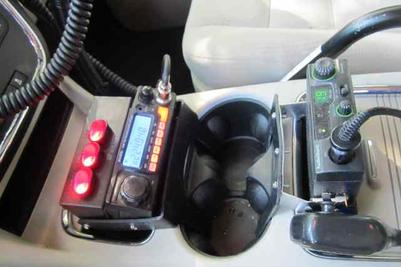 My previous mobile installation was in a Mercury Grand Marquis but when I needed a mobility scooter to get around at hamfests and flea markets and the like, I also needed a vehicle capable of carrying the scooter inside. Thus my new vehicle is a Dodge Grand Caravan with a scooter lift in the back and room for several radios in the front.

The radio installation has recently been upgraded with the addition of a switch panel that controls the power to the radios, to a dash mounted GPS, and to an auxiliary feed that can power various items such as a CB radio for long trips (it always helps to know what is causing the 10 mile parking lot you find yourself in for no apparent reason) and a UPS power module that can charge 3 devices at once. There are other Power Pole connections for additional devices as long as the total power drain of all the devices including the main radios does not exceed 25 amps. This should be no problem since I can only operate one radio at a time.

With the additional space that the Dodge provides, I secured another IC-706MkIIG for use as my primary radio. I also purchased a Jetstream 220 rig since a new 220 repeater was erected in my area. Since I once again had HF capability in the mobile, I also purchased a Tarheel II screwdriver style antenna and had a custom mount made for it. I had not planned on needing the custom mount, but the architecture of the lift gate at the back of the van precluded using the stock mount. A metal fabricator in a neighboring town was very helpful in creating a mount to my design out of stainless steel. Along with the antenna I obtained a Turbo Tuner II to control the antenna automatically using the C-IV data from the 706.

The next question was where to put all this stuff. The center console in the van has two storage units with sliding lids, the front one had just enough space to hold the 220 radio and a custom made switch module that my son and I designed and printed out on a 3-D printer at his office. It even has the labels for the switches etched into the face of the unit. As usual, I used Radio Shack 30 amp illuminated rocker switches. These have been my go-to switch for this purpose for many years. They are generally available at any Radio Shack store, they are clearly marked as to the purpose of each connection on the switch and because they are illuminated, it is darn difficult to forget to shut things off at the end of the ride.

In order to run the various cables to their final destinations (ie: the back of the radios) it was necessary to drill a few holes. One was drilled in the rear storage area to feed the auxiliary power to the USB ports and the multiple Power Pole connections. It is covered by the rubber mat that is stock for the vehicle. In the front area where the 220 radio and the switch box reside it was necessary to cut out about a 2 1/2" diameter hole in the rubber mat itself but that is an easily replaced part. It turns out that there is a hinged panel that separates the lower storage area where the 706 main body resides from the drawer area where all the cables come in. Opening this panel was easy, requiring only a flat bladed screwdriver to pry it open. This gave me full access to feed the cables to the 706 and also to feed the power source wiring from the switch box to all of the powered devices. A bit of tidying up kept most of the cable and wire runs out of sight. In the future, I may install mesh panels on both sides of the lower storage area to hide the body of the 706 and any remaining wires or cables. Below are some photos of the completed installation.