This is the new industry I started building tonight. It is not done yet by a long shot but the basic shape, doors and windows are prepared and ready for paint, glazing and the application of a partial sheet of sandpaper for the roof. Later I will add details to the roof and other places, but for now this will do. I did situate the cargo doors by the tracks in the appropriate positions for the boxcars I have on hand. I framed out the doors on the end for trucks but I am not going to cut them out. I will make the doors look realistic but There will be no detail on the inside of the building yet. i did add an awning stretching over both of the rail side doors to keep the unloading crew out of inclement weather. The details and texture will come later. 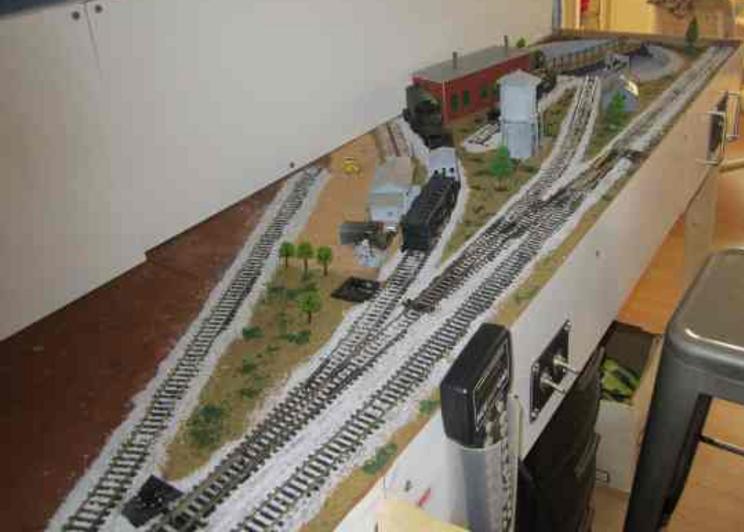 Scenic operations have begun. Just a small section as yet but an important milestone in the progression of the layout.

This is the finished version of the industrial building. Doors windows and awning have been added along with a significant amount of painting and detailing. Signage and ground cover has been added. so this building just needs the roof painted to look like roll roofing and a few details added to said roof.

The scenery has begun to take hold. This will not be a fast process as I am very much in a learning mode. So far I think it looks OK. The locomotive servicing structures like the water tank and sand house are in their final positions and in fact are glued down. You may notice that I have not put scenery materials beyond the siorage track with the steam locomotive on it. There is a reason for that. I want to install the first section of backdrop behind the engine house before I add ground cover. That way the backdrop will sit on flat plywood rather than somewhat bumpy ground cover. It will also mean that I can work on the backdrop without having to mess around with bushes, trees and grass etc. I am going to screw the backdrop directly to the wall behind it. I will hide the screw heads with wall board compound sanded smooth. The backdrop will also get painted or covered with printed material before the scenery is added to the back of the benchwork.

I also have to decide where the roads will go and install them using the spackling compound which will then get painted and weathered. So far so good. 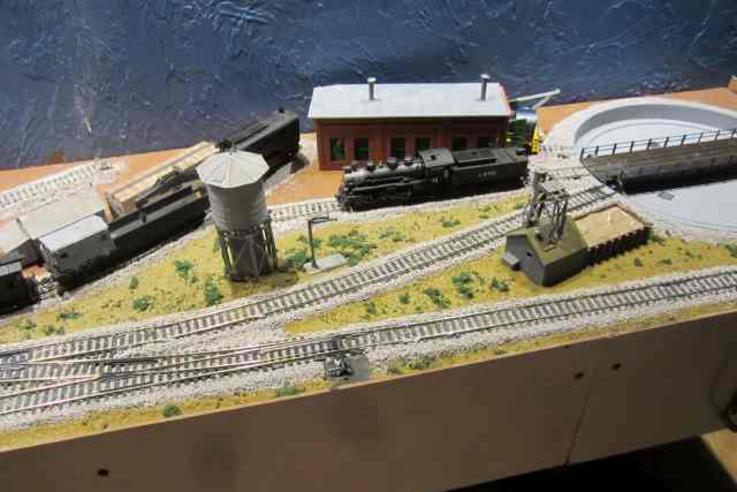 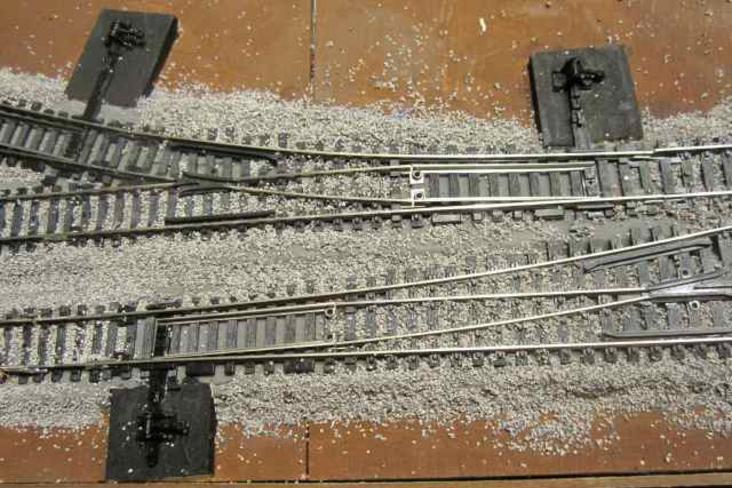 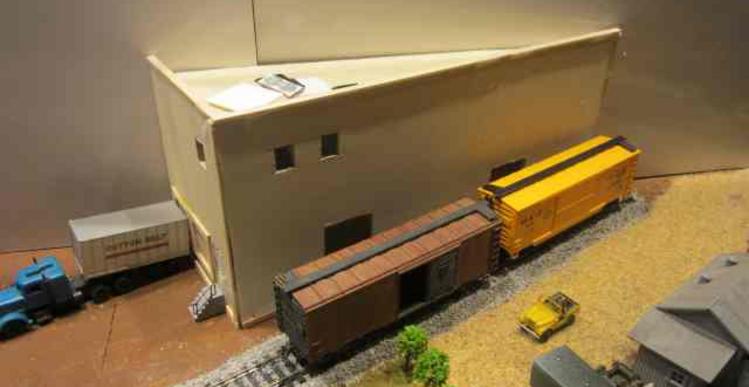 One little detail I forgot to mention is that the station now has a displayed locomotive all it's own. The locomotive in question was a non DCC loco that arrived DOA. The guys at the model railroad club determined it was a dead motor but the cost to fix it and add a DCC with sound decoder was more than I could justify (especially since I had no where on the layout to store it) Thus it beame a static display with a short section of track ballasted for it to stand on. The Historical Village in Bradenton, where I live has just such a display featured prominently along Manatee Avenue. The structure that was there has been moved to the MOW track. 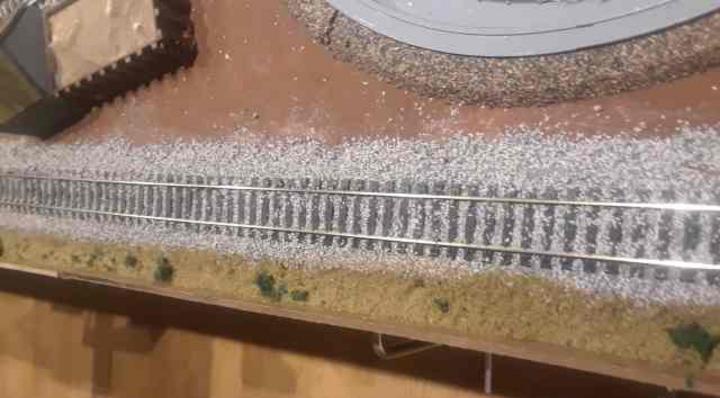 The small area between the tracks and the front fascia has been filled in with blended turf and some coarse ground foam to represent small weedy bushes. I must say, I am impressed with how lifelike this material looks. The areas on the other side of the tracks will be getting roads and more scenery but I think I might have to add some buildings first. Still, I think this was a good start for a "beginner" in this model railroad stuff.

I noticed that the page about my new hobby was getting quite long. I should have noticed it earlier but I didn't. Hence the addition of "Page 2". As the layout gets closer to scenery and a "finished" appearance the number of photos will become less and I will edit some of the older stuff out.

It is now Saturday, so I spent some time down at the model railroad club in Bradenton. The club is called RealRail and besides the layouts HO and O gauge, the club has an N gauge portable layout which they sometimes take out to private parties and model railroad shows including their own show in March of every year at the Manatee Civic Center. Saturday is open house day where the public is invited to come by and see the layouts in operation.

After my time at the club, I came home and did another few feet of ballasting my own layout. I am now more than 1/2 way done on the main line so another few days and it will be on to the extension. So far the ballasting is going quite well, in my humble opinion. I am after all, modelling a kind of short line, switching layout so the ballast does not need to be main line perfect, just fair to middling will do fine.

This is the new diesel .fueling facility. The tank was once the container for a Jet engine (a flat car load) but with the addition of a filling port on the top and afueling hose and pump to the right plus a barrel and a crewperson for detail it makes a fair to middling diesel fuel tank. It is mounted on a slab of basswood painted to resemble concrete and only needs a bit of scenery to blend it into the layout. The same applies to the industrial building but I will get to that when I have time.

Further progress on the scenery. The MOW (maintenance of way) track area has been fully completed with a dirt road, trees, vehicles etc. Some of the vehicles will have to be repainted but for now they are placeholders that will do for now. I cannot go any further to the left of the picture until I complete the structure for the long straight siding. This will be a major industry so it will take some time before it is ready.

You might notice that there is no ballast yet under the points of each turnout. This is deliberate until the major ballasting is done and I am sure that all turnouts are operating properly. Then I will carefully add ballast under the points and very carefully cement the ballast in place all the while making certain that the turnout continues to work as intended. The ballasting on the original layout has been completed.  The ballasting on the extension will start as soon as my supply of ballast has been replentished. The ballast will look much better once some ground cover is down to neaten the edges of the ballast. Things like roads, buildings and other scenic items will come as funds are available.

I am happy to report that ballasting is finished on the layout.  Next comes track cleaning to get rid of the glue and other stuff on the rails so the locos and rolling stock work properly without any problems. Then on to scenery and structures. I have operated both locomotives over the entire layout and found only minor problems with the track in terms of good contact with the wheels of the equipment. More scrubbing with the track cleaner tool will solve that. There appear to be no problems with the ballast interfering with the operations.