If you look at the two pictures above, you will note that the level crossings are unfinished. That has now been rectified. I found my missing supply of scale lumber and the area between the rails of the three level crossings has filled in with scale lumber. I will be adding more trees to the area to the right of the freight house in the picture immediately above and the ground cover and gles etc have been put away as I have a building coming to put on the outside of the curve. I have also decided what to do with the area behind the new portion of the layout. I am going to use some form of building flats t create the illusion of a town behind the modeled portion of the layout. Eventually, the lift out bridge section will get painted and side with narrower forms of the fascia. I have doubts about putting ground cover on the lift out because with movement that might come loose and scatter all over the floor in that area. I have enough trouble keeping the floor clean asd it is without causing more dirt etc.An update to the above is in order. I have painted a roadway on the outside of that curved part of the track and plan to add at least one building to the layout beyond the roadway. The flats mentioned above will go behind the new portion of the layout in the unpainted area. Together wth the roadway and building, I hope this will create a reasonable impression of a town or small city behind the modelled portion of the layout. There will be no backdrop of sky because it would obstruct the windows behind that portion of the layout too much. I will probably use the same technique for the extension or part two of the layout as that has a window and a sliding glass door behind it. The modelling continues.

I have deliberately left the area in the jog-out corner only lightly scenicked because I am still planning to place a yard office in that corner behind the sand house. I also have not done anything yet with the area outside of the curve that brings the tracks onto this portion of the layout. I have plans to put some form of structure there but until I firm up those plans and actually build a structure to go there, I will leave that area bare.

Unfortunately, I have found a very problematical area on the new portion of the layout. The track curves from the lift out bridge from the older portion of the layout to the trackage on the new part. Unhappliy, I have found several major errors in my track work which consistently derail trains running on that area of the track. I tried several methods of taking the kinks out to no avail. The only solution would appear to be ripping up the bad track and doing a much better job when I replace that section. This area has already been ballasted so it will be a major job that I am not looking forward to, but it has to be done. Ah well, on to page 11. 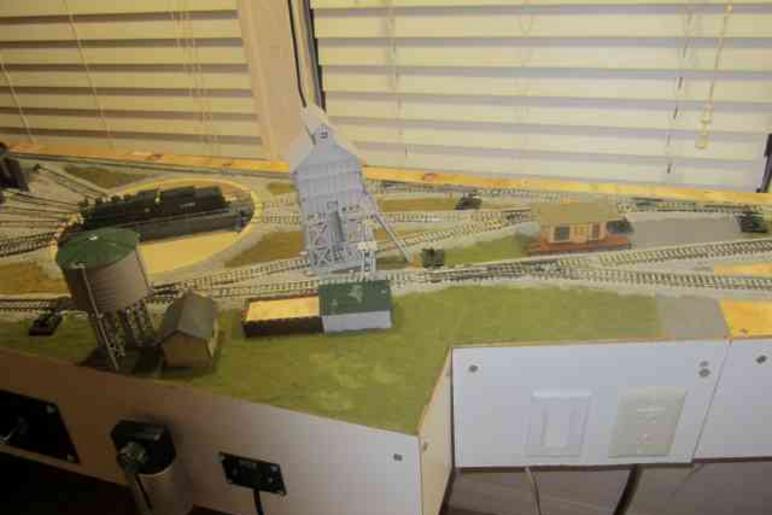 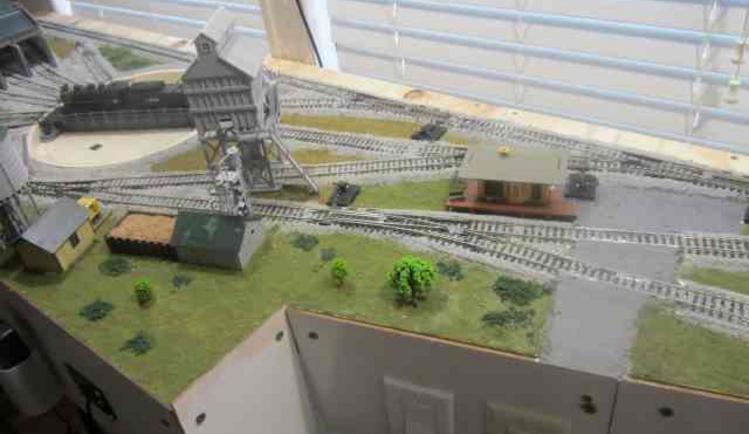 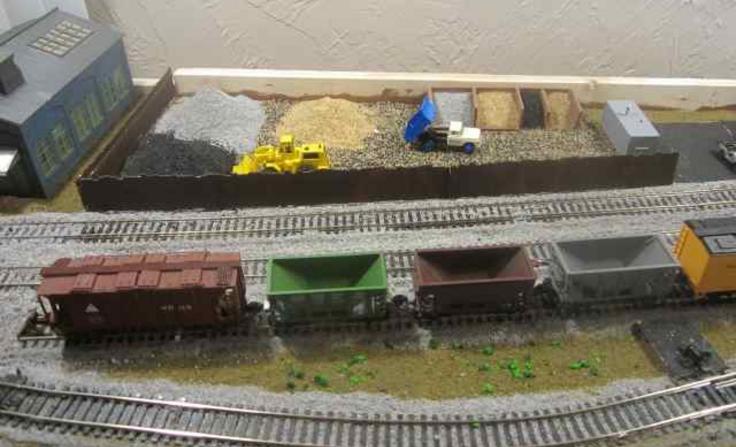 The work continues albeit slowly. more ground cover has been applied but I need to decide where the road to the freight house should go before I put ground cover in the wrong place, I also have to get that little tub of spackle (also called drywall mud) so I can make the roads cross tracks as necessary.

Here is a shot of the new hand crank. The mechanism works just like the other turntable, the crank handle turns a worm gear which in turn rotates a large gear connected to the turntable bridge. Thus there is no way to turn the bridge via the "hand of god" method. That lesson was taught to me the hard way with the first turntable. I hope I have learned my lesson. Now I just have to be patient and wait for the rest of my scenery supplies to arrive. I really must give a big shout out to Joel Perlin who is a Meccano and Erector Set Purveyor out in California. I have sent him the diagram from the Peco Turntable instructions and he responded with everything I needed to make the kit work perfectly.

My son-in-law, Mike and my grandson Jake came over this morning to give me a hand by installing the crank mechanism for the second turntable on the layout. All went very well and so I now have both engine facilities completed. I do have to add some kind of protection around the hand crank to keep people (me) from catching on the crank and causing untold damage and misery, (just joking). 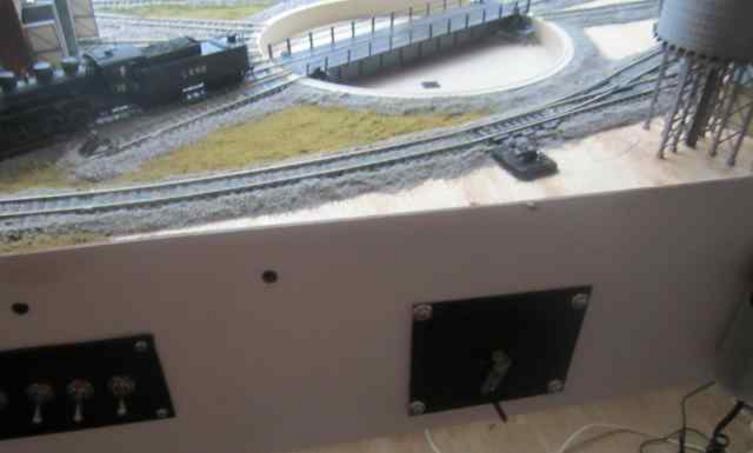 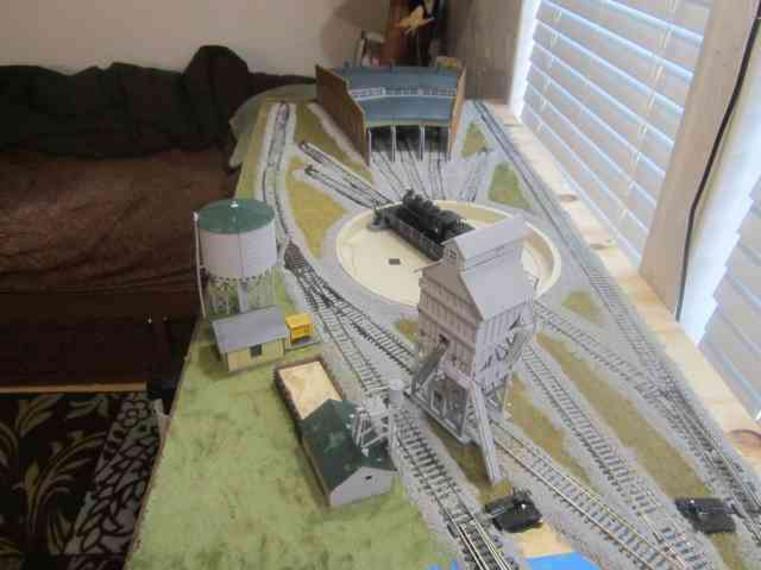 While the entire country seems to be turning into a nation of recluses, somewhat understandably, The progress on the newest portion of the layout continues. I am deliberately taking smaller steps so that the work will still be there, I have advanced the basic ground cover into the general area of the passenger station. I seem to have misplaced my little tub of spackling compound so I will have to buy some tomorrow to create at least two small roads, one to the station and the other to the small freight house on the only spur track on this portion of the benchwork. You can see the spur coming off to the right of the track in front of the station. On a side note, my first piece of passenger rolling stock, a combine car should arrive tomorrow. I will of course, convert it to KayDee couplers before it goes on the layout. I also plan on covering the sandpile next to the sand house with a layer of real sand. The work continues.

I occured to me this morning that there was still work to do on previous portions of the layout. Specifically, there was no fence around the sand and gravel dealer at all. This also meant there was no separation between the railroad yard and the gravel dealer either. With task selected I set to work building a 9 foot tall fence around the dealer. The total length turned out to be some 28 and 1/2 inches in the horizontal and 1 and 1/4 inches vertically. I checked to make sure I had enough strip wood and began to construct the fence. It was built in two sections, one 8 and 1/2 inches to separate the dealer from the adjoining factory building and one 20 inches long for the area between the railroad yard and the dealer's property. Once constructed these fence sections were painted a medium brown, deliberately spotty in some areas to create a worn look. As soon as I can get the fence installed I will add a photo of the scene. Photo now added

Some progress has been made on the new portion of the layout. I did obtain that tub of drywall mud and the rail crossings have been installed. I have also installed most of the ground cover and painted the road surfaces that were created with the drywall mud. I did have a "holiday" from the layout for a number of days but I am back at it now. The last bit of ground cover will have to wait until I decide what will go in the corner to the outside of the railroad curve that brings the tracks onto this portion of the layout. Nontheless, the workis proceeding somewhat slowly, mainly to give me somehing to do while I "shelter in place" as the government (and my kids) have asked me to do.

I have finally received the correct color blend of ground foam from my supplier and as soon as I can get to it, scenicking will begin in earnest. Today it is Post Office, shopping, Dan Mobely playing at AMOB and probably getting my laundry done. All this too shall pass aqnd then I can get back to the railroad.

Well, I went looking for 70% rubbing alcohol today (it is used as a wetting agent for ground cover on the layout) and discovered that the entire world has gone mad. Every store I tried was out of rubbing alcohol and out of those little alcohol soaked pads that I need to take my blood sugar. I was able to order a box of those from Amazon, but no rubbing alcohol to be had anywhere. What are these people doing, taking baths in rubbing alcohol. Simply mind boggling. I saw a statistic today that said about 5000 people worldwide have died of Coronavirus and the world goes nuts, last year heart disease killed over ten times that many and KFC sells donut chicken sandwiches. The world is NUTS.

I did a very small amount of work on the layout today, just added crossbuck signs to the two grade crossings on the new portion of the layout. It is looking much better with shrubs, trees and the start of signage like the crossbucks. I also made myself a face mask from a bandana and a pair of coffee filters as suggested by several sites. It does seem to work quite well in terms of fit. Function, I have no idea but since my only trips outside will be to pick up my prescriptions it will have to do. 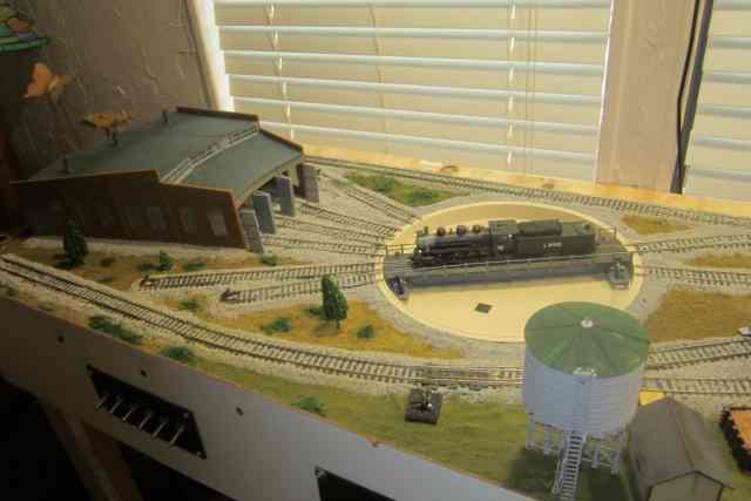 More scenic details have been added to the new portion of the layout. Bushes and trees have been placed around the engine terminal and the work continues towards the lift out bridge to the older portions of the layout.

The picture above shows that some progress has been made. The engine facility section of the new portion of the layout has now has it's ground cover in place. There will be more details to come, like bushes and weeds but at least four feet of the new portion no longer has it's plywood base exposed. The next 5 feet will be somewhat easier since the width of the benchwork slims down to 12 inches. Some major repairs are going to be required to make the turntable function properly, unfortunately. One missing part and a lot of re-adjustment of the gearing will be required. Hopefully, I can get some help with that soon. In the meantime, I will resort to  "the hand of God" to turn the locomotives. You may have noticed the multiple shades of green within the ground cover. I could not find the original color of ground foam that I used elsewhere. THen Amazon sent me a cannister of the wrong color. When I finally got the cannister that I wanted, it turned out to be yet a different color again. Once I get the volume of ground foam to the point where I can mix some of them together, I may redo the whole thing. This business of creating a model environment is a lot of fun, but at times it can be a bit frustrating.