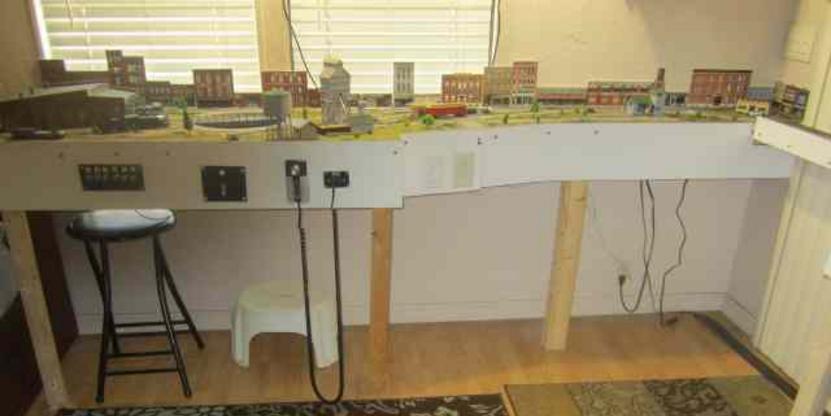 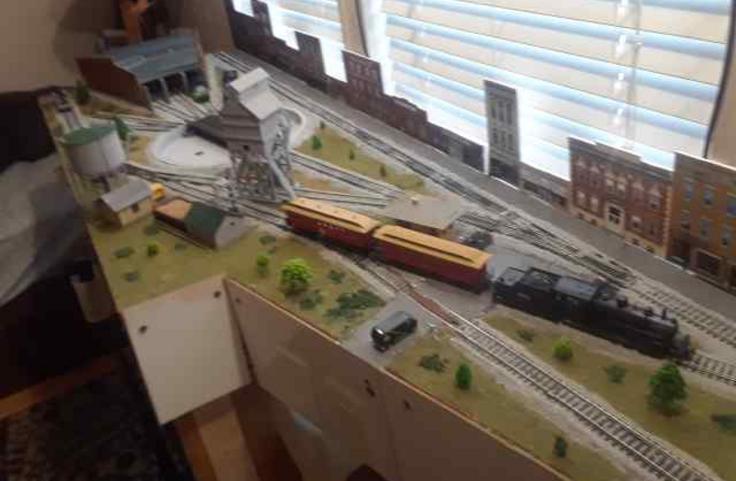 The two pictures above demonstrate a bit of progress on the railroad. The upper shot shows the now completed sky and cloud backdrop behind phase two of the layout. with a few building flats added, more to come. Phase one will be done as soon asa I figure out how to add the sky and cloud backdrop to a hardboard backdrop already securely in place. The lower shot shows that the railroad now has proper passenger service. The combine and the passenger car came from a now defunct railroad via Ebay and complete my plans for at least a vestigial passenger service on the railroad. 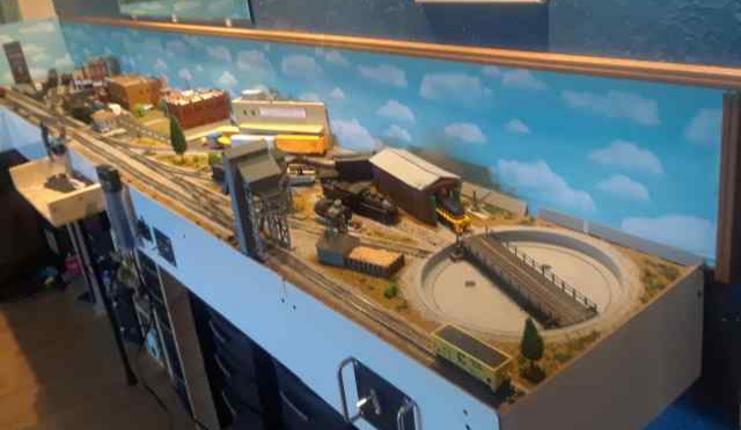 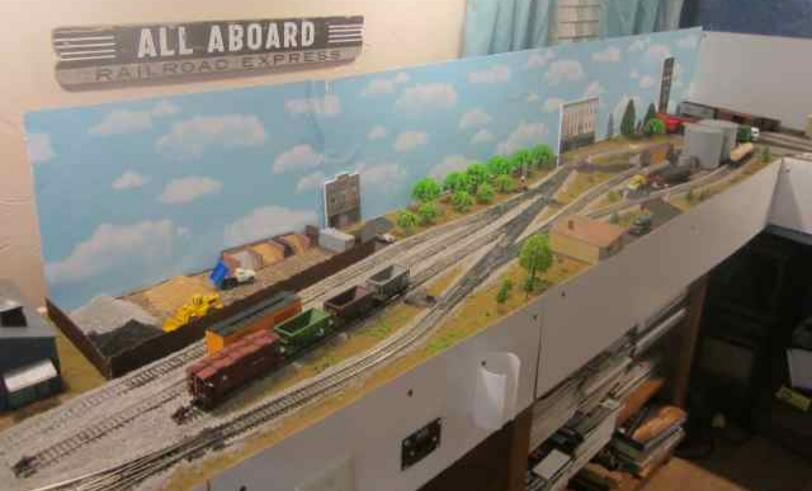 On the North side I decided to stop the backdrop where the vertical blinds begin for the sliding glass door. Sory about the slightly fuzzy focus on this shot, my camera is pretty basic. 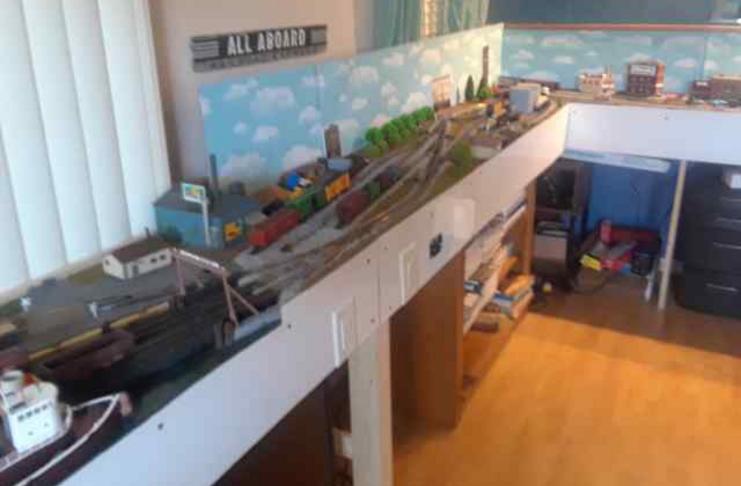 The basic backdrop of sky and clouds is now done. There are a few bubbles which I hope to hide with building flats in the near future but the main thing is that it is done. I did have to move most of the buildings and scrape off the fencing and low walls that were attached to the backdrop base but they are easily replaced. Next comes the painting of the fascia and the trimming out of the backdrop and the fascia. Then I can move on to the detail improvements and operational tweaking which I am sure the layout needs badly.

As you can see from the picture above, the sky and clouds have been added to about 70 inches .of 12 inch high backdrop. I cannot go any farther to the left until I make some room behind the gravel dealer. I also am going to have to consider how I am going to add the sky/clouds to the existing backdrop behind the first portion of the layout since buildings and dividing walls are already glued in place.

My orders from Ebay both arrived today so I now have 24 feet x 12 inches of sky and cloud backdrop to add to the layout and a new old time passenger car to go with the combine car I got last month. My biggest problem seems to be that one of the new locomotives that I gor a couple of weeks ago has a problem in that the leading truck on the tender keeps locking up and derailing. The couypler on the tender is also much too low to mate well with my rolling stock. Both of these problems will be seen to in due course. In  the meantime one of the other locomotives appears to mate up perfectly with the passenger cars. I am hopeful that I can get an 8 foot by 1 foot section of 1/8" hardboard into my screened in porch to apply the backdrop materials to it. Time will tell.

The text that I just added to Page 11 of My Model Railroad put the page length just on the limit that I set myself, so here goes page 12. I am quite sure that I will have plenty to add in the days ahead. On another note, I finally got around to painting the Turntable pit on the new portion of the layout. I have been meaning to do it for some time so I finally got it done.

Today is Thursday, one day after I wrote about the problems I had with the various cables and wires strewn under the new portion of the layout. Well, those problems are gone. By carefully cutting around the alignment block that secures that end of the lift out span I was able to remove that section of the fascia. This gave me a much better view and much more access to the underside of the benchwork. I was able to secure all of the offending cables and wires to the underside of the benchwork using zip ties fastened to the benchwork with 5/8" staples. Other than getting down into the position and thjen getting back up again, the job was almost a breeze. It is the getting down and getting up that causes me the most trouble but that is probably my age I am closer to 80 than to 70 after all. In any case the problem of the rats nest of wires and cables under the layout is gone. The fascia went back up without a fuss. My next project will be to paint and trimout all the fascia and backdrop material. I have 24 feet of sky and clouds on the way and a quick trip to Home Depot will provide all the paint and trim I will need for the fascia. I do still have a few building flats to add to the backdrop when the time comes.BTW David picked up my SW-1 loco this morning so when it comes back I will have another DCC and sound equipped loco for the layout. Mind you this one is over 40 years old and still works fine.

These three photos show the current state of affairs on the layout. Backdrop is done, Paint yet to start.

The three images above show that for all intents and purposes, the painting of the fascia is done. I notice that my camera makes it look like at least two different brown colors were used. Trust me, the paint is the same color throughout. I still have to touch up things like the ends of the trim pieces at the corners and add the protective bars around the new turntable like I have on the East turntable crank directly above. I have not decided wether to paint the benchwork legs or not. They may wind up covered with some kind of curtain arrangement, as yet I have not made a decision. The painting took most of the day. I put on two coats of the brown which by the way pretty much matches the bookcases and daybed. It certainly looks better than the white. The only part I have not yet painted is the lift out span from the North module to the West Module across the sliding glass doorway. Ah well, there is always tomorrow. Speaking of tomorrow, it has arrived. In addition to painting the lift out span and securing the plug that it plugs into for track power, I also purchased 3 more of the Brown plastic drawer units that are visible under the phase one benchwork. One has been added in the empty space under the hand crank for the turntable and the other two  are under the turntable area on thre far side of the room. Most of the cardboard boxes that used to be under the banchwork are now safely tucked away in the new drawers. The decision has been made to add three tracks of staging to a seven inch wide shelf that will run behind and above the day bed on the South wall of the room. This will not be scenicked but just be tracks using two # 4 turnouts to direct them to the track that runs behind the roundhouse on the West wall. The sheving is alrerady painted as it was one of the shelves that had to be removed to install the Westward module (also known as phase 3. The brackets are ordered and should be here by the middle of May. I will have to order some flex track via Ebay and I plan to install the track and turnouts before the shelf goes up. I do not want to subject the shelf to the strain of installing track after the shelf is in place..

My eldest daughter, Lisa, came to deliver my groceries this morning and pointed out the major oops I made with the backdrop. The backdrop over phase one was UPSIDE DOWN. That's right, your humble servant had mounted all of the sky and cloud backdrop paper upside down. I guess I was more interested in keeping the ragged side of the paper down and didn't notice which way the clouds were facing. The oversight has now been corrected and it makes the installation of the trim even more important than before. Off to the DIY store for some trim.

Said trim has now been obtained, along with a quart of dark brown paint with which to paint the fascia along with the two guard rails to go around the crank handle for the second turntable. The majority of the trim has been installed, only the three short pieces for the outside corners of the fascia remain . They will be installed after the painting is done, probably tomorrow.

The West shot is of the newest part of the layout. It is possible but unlikely that the straight track closest to the windows might be extended to a small staging yard behind the daybed. I have not decided yet whether to call it a staging yard or an interchange yard or even whether to build it at all. Time will tell. 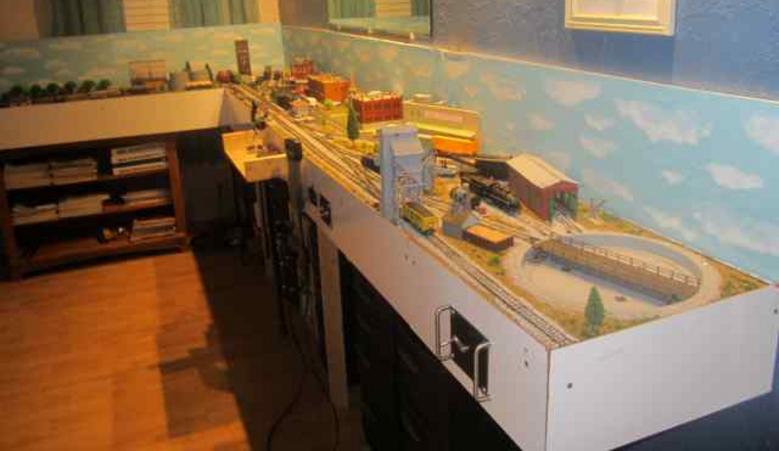