The four pictures above display some of the changes made to the layout in the past day or two. First, A bunch of building flats have been glued to the backdrop on Phase 1 and 2. Both stations (Phase 1 and Phase 3) have been painted in what I have decided will be the predominant color scheme for railroad structures. The only exceptions will be the two coaling towers as painting them tan with a green roof would be a waste of time since the coal they provide (in theory) would render any color scheme invisible. Better they should stay MOW gray. I did make one error, of course, The backdrop buildings behind the church are completely blocking off the side street. I cannot change it now, so I may wind up putting ground cover over the street and eliminating the street instead.I just realised that I do have one more building flat in hand, so I may put that one behind the triangular building, my first scratchbuilding project, because the 3 dimentional structure will hide the fact that the flat does not go all the way to the ground. It will however hide the fairly obvious seam behind the scratchbuilt structure. Enough for now.

The shelf brackets for Phase 4 are supposed to arrive today but the rest of the supplies I need to complete the project are not expected until Monday or Tuesday at the earliest. Patience is a virtue I guess, but  those who know me are aware that I am a bit lacking in that regard. Still the same day, the shelf brackets have arrived and with the aid of a metal/wood stud finder I was able to mount three brackets in a reasonable amount of time. THe level says the shelf is true and level so now we are just waiting for the track and accessories to arrive to complete Phase 4.

With the shelf in place, the next step was to run the power buss wires to the far end of the shelf. That has now been accomplished, albeit with some difficulty getting the wires behind the shelf itself. The two wires are still loose. They will be stapled up into place only after the track is laid and feeder wires are dropped through the shelf and connected to the buss wires. I expect to have that done by tomorrow night as the track and rail joiners will definitely arrive tomorrow with the post. By the way, one of my locomotives stopped working yesterday and a piece of the shell was missing. After emailing the manufacturer for help I was amazed to find the missing piece on the carpet today. I replaced it on the loco and wonder of wonders it now works properly as though nothing had happened. I have no idea why it malfunctioned at all. On the other hand, the 2-6-0 steam loco that I repaired yesterday (the tender was way too low) still has a problem in that the leading truck on the engine seems to go off on a tangent whenever the spirit moves it. I am going to wait on that problem until I can get someone with way more talent than I have to take a look at the problem and maybe come up with a solution. I have also ordered a total of 11 more freight cars via Ebay for the layout. 4 of them already have Kadee couplers installed the other 7 will need to be converted.

The construction phase of my layout is DONE!. My son-in-law Mike and his son Jake came over today at my request and connected all 12 feeders to the buss wires using inline splices (also called suitcase connectors) and testing demonstrated good power all the way to the end of both tracks. I also redid the track diagrams that I put up on the fascia the other day. Unfortunately, when I did the initial diagrams I got them all a bit skewed, so today I printed them again and cut them out a bit bigger in all dimensions and layed them over the old ones more neatly this time. I tried pulling the old diagrams off of the fascia but they just tore so I simply covered them up with the new ones. Pictures will follow. From now on the job will be to add details like people, signage and vehicles for the most part but also to tweak a couple of locomotives that have pilot trucks that seem to enjoy derailing for almost any reason.

These two photos are of the latest improvements to the layout. The phase 2 backdrop has been repaired and trimmed out in the upper photo and the lift out section between Phase 2 and Phase 3 has been painted to match the rest of the fascia. I also secured the plug connection for the lift out to the support at the end of Phase 2 to keep it from hiding behind the TV when the lift out is disconnected.

Here are two pictures of Phase 4. THe trackage has been tested for proper operation and all the loose ends staples up out of the way. It looks like the addition of trim to the front edge will not be necessary after all.

The next phase will be to add curtains to the bottom of the fascia to hide all the stuff under the layout. They will be made in sections, held up with Velcro so that they are removable if I need to get at the stuff they hide. 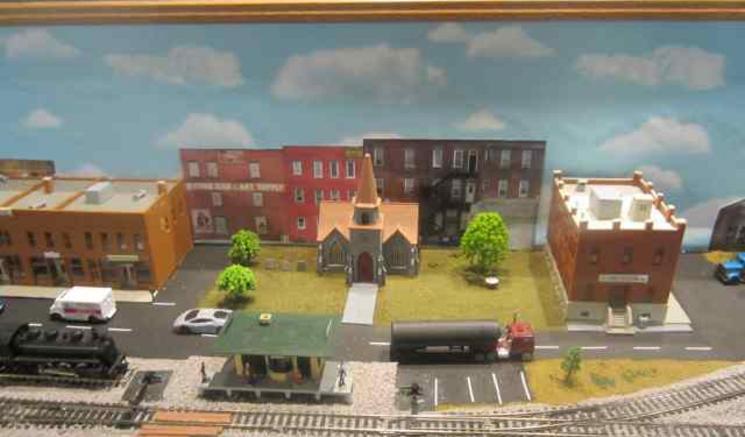 The display/staging shelf awaits only the arrival of track and rail joiners to be completed. I do think the stud finder missed one stud so I may try adding a 4th bracket in between bracket 1 on the left and bracket 3 closer to the center. The missing stud has been located and the 4th bracket has been installed. I have no idea why the studfinder missed one out of four studs but measuring showed there should be a stud in that location so I mounted the 4th bracket and sure enough there was a stud right where the tape measure said there would be. Job Done!

The feeder wires have all been soldered in place at three different locations on the shelf. There is no more than 4 feet between feeder drops so there  should be no diminishing of the DCC signal nor the power. I am forced to wait until tomorrow for the in-line splice connectors to arrive so I can connect the feeders to the buss wires.

Nothing here yet but the night is young. I simply reached the limit of Page 12 so it was time to move on to Page 13. 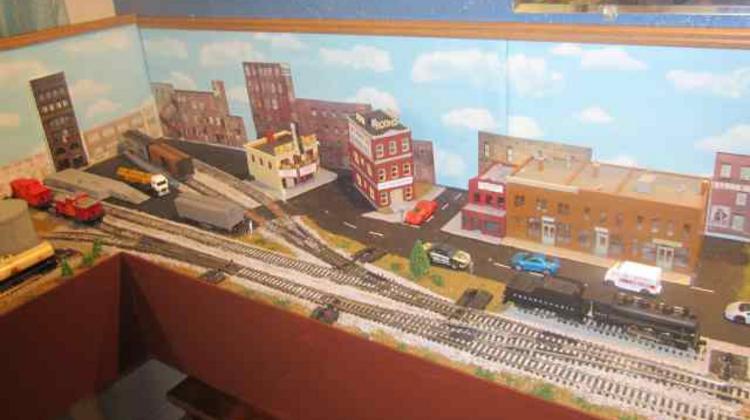 The two pictures above show Phase 4 of the layout and the final part of the project. The track has been laid down and secured The buss wires are in place, I just have to solder feeder wires onto the rails and connect them to the buss wires. I will be adding a bit of trim to the front edge of the shelf to aid in hiding the buss wires from view. Phase 4 has two purposes, as a staging yard to bring trains onto the layout and as a display track for some of my more unusual models.  I should point out that the space under the shelf is quite adequate.

Below are three photos of the latest look for the layout. I took them to update my Facebook page but I am adding them here because the layout looks much tidier in these latest photos.

These two pictures above show the latest addition to the layout. This shelf will not have any scenery or ballast. The shelf is intended to have a dual purpose, one, to be a staging yard for the rest of the layout and two, to be a display shelf for some of my more unusual rolling stock. It is up at the moment on a temporary basis until the shelf brackets that I ordered from Amazon come in. I also have track on order via Ebay which should get here about the same time, I have installed one turnout with a ground throw and attached the turnout to the rest of the layout via the track that runs behind the roundhouse. The shelf will also need some minor touchups to repair the scuffed paint. I have drawn the centerlines of the two tracks on the  shelf and used homemade templates to draw the curves also. Thankfully, the curves fit very nicely onto the expanded area of the corner. Now I just have to wait for at least a week until the track and other materials get here. 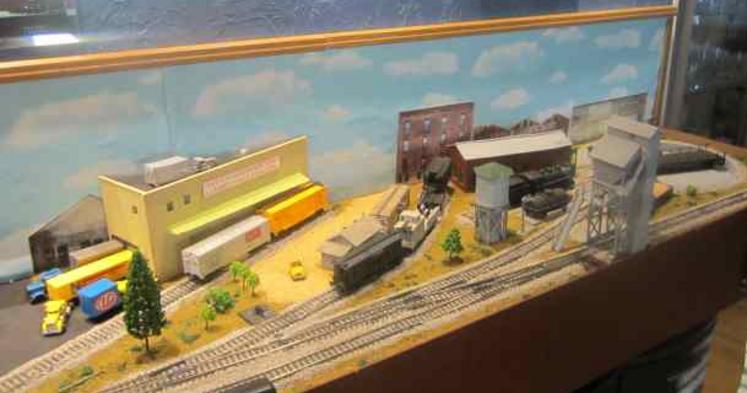