The basic scenery has been addded and for the moment all fascia has been painted. Some areas will need a second coat, but already it looks much better.

THese two photos show some of the additions to the rolling stock. THe "Baby Ruth" car on the left turned out to actually be a track cleaning car with a large roller inside the box car body that rests on the track. I may try soaking the roller with track cleaning solution. The gray car to the right of the MOW flat car is also a track cleaner which uses an abrasive pad that is weighted to drag on the rails as the car is hauled around the layout. THe most recent additions are the four cars on the right hand side of the lower picture. They arrived today and were complete with KaDee couplers so no modifications were necessary. I still have two more cars that came in a day or so ago but I have to wait until my supply of couplers is replentished before they go on the layout. 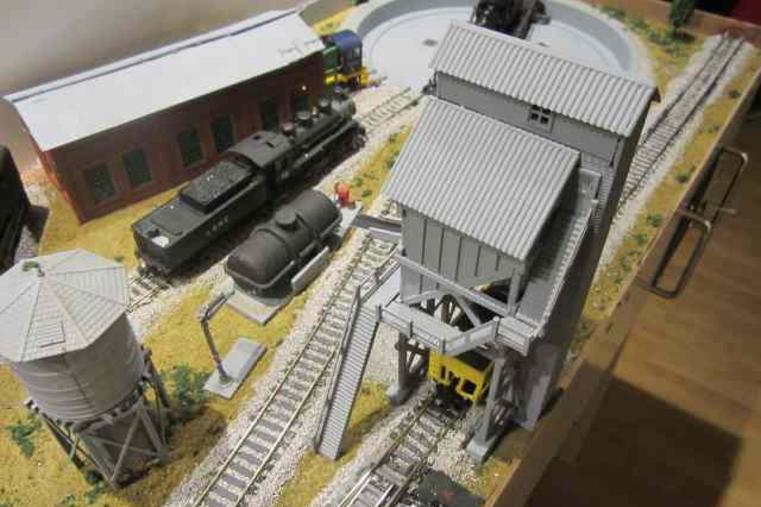 With the last pieces of lighting in place and the muslin fabric ordered to disguise the rather messy area under much of the layout, I am now turning my attention to something I probably should have paid much more attention to much earlier. I have three steam locomotives that frequently derail usually in the same spots,but my diesel locos almost never do anywhere on the layout. I am not sure if the problem is with the locomotives, an 0-6-0 and two 2-6-0's, or with the track. I have already had to raise the tender on one of the 2-6-0s because the rear coupler was very low. and the biggest problem with the locos seems to be the lead truck. It derails the loco because it gets onto the wrong track at a turnout and eventually drags the entire loco away from the track.

I tried to be careful when laying the track originally, but I know there were some kinks in certain sections that I have already replaced. I have checked the entire layout with my NMRA gauge and other than one turnout that was out of gauge, since replaced, all the trackage seems to be in gauge. I am beginning to question the loading of the lead trucks on the 2-6-0s and also wondering if the problem is the lead truck "picking the points" of the turnouts where they derail. More research is required and will be carried out.

My daughter and son in law are coming over tomorrow (Sunday) to assist me in finishing the construction of the final phase of benchwork. I have already purchased or have on hand already the lumber and plywood for the task. I have also purchased the hardware which will allow me to tilt the bridge up out of the way so I can get into the room. If I am not running the railroad I will leave this "bridge" in the open position. It will only be down when I am actually operating the layout, unlike the lift out section on the opposite wall which I keep in place unless I have reason to go out to the porch. MY daughter and my granddaughters will most likely go to the pool while Gabe and I work on the benchwork. 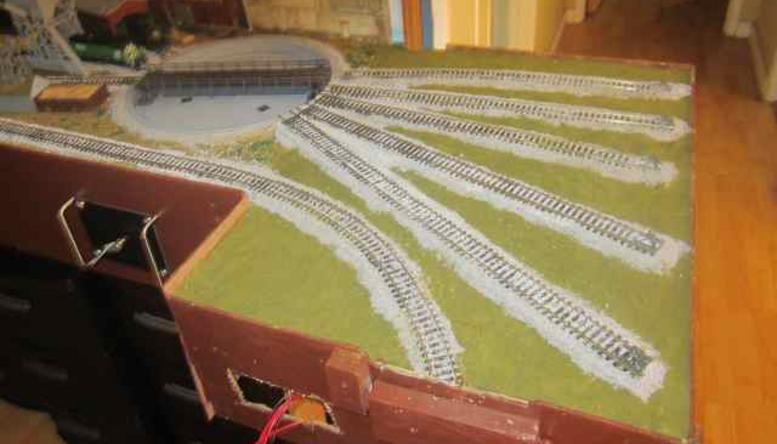 This is the first, but probably not the last change on the layout. In order that the main line does not go directly through a coaling tower, I moved it to track 2 of the turntable feeder tracks. THis is not without precedent in the real world. I have seen photos of the prototype where the industrial spur for a coal dealer was off the turntable and there is room on the turntable for a loco and one car. The loss of a turntable feeder track will be resolved by building a 12" x 24" extension onto the South end of the layout beyond the turntable in the photo and adding several more feeder tracks over there. This will also provide for an eventual connection of the main line to the staging tracks on the South wall of the room via a fold up (or down) bridge. Thus it will create a complete loop of track for running longer trains around the room. The current shelf along the South wall will be extended about 34" past the Recliner and the tea cart to leava a 36" wide entry point which will be spanned by a bridge track. I already have most if not all of the materials in hand to make the extension for the East side (or Phase 1. I also have in hand most of the materials for extending the shelf along the South wall (Phase 4) There was one more turnout installed on the Phase 4 shelf to join both tracks of Phase 4 into one main line which will connect to Phase 1. Only Time will tell how quickly this proposed addition will get done.

The fold up bridge has been painted and alignment is still great. The bundle of wires below the bridge is awaiting the arrival of DPTD switches to complete the wiring for the storage tracks to the right.

The required switches have arrived and finally are installed. I also installed a tree just above the location of the switch panel to break up the evenness of the storage tracks. I will probably add more smaller trees between the outer end s of the storage tracks in the near future. I should point out that the idea of trees and other scenic details is prototypical, particularly on a short line railroad such as mine. I have seen video of a full scale steam engine being turned on a turntable and there was plenty of foliage around the turntable. Tomorrow I will put a second coat of paint on the fascia and touch up a few scratches here and there caused by my work on the layout. 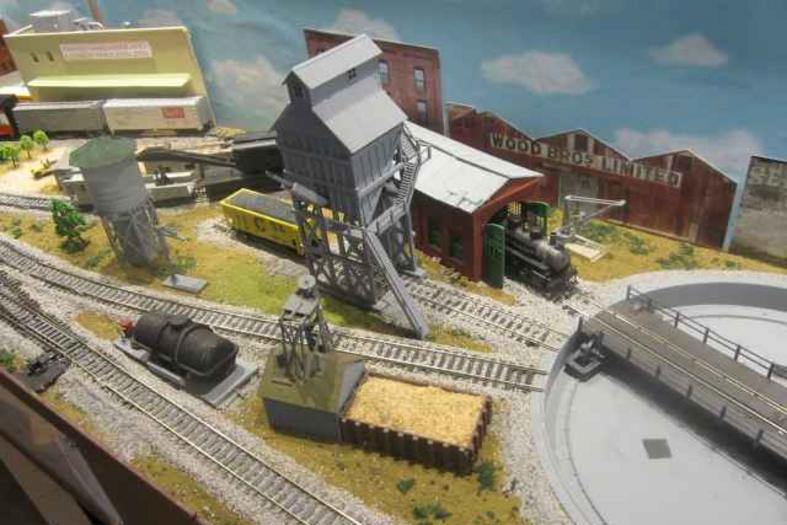 Here is the "last" structure for the layout. Even though the shelf has no scenery or ballast, the empty corner begged for something. It still needs painting to match the rest of the rail-road structures but all in good time.

The final lighting is in place. A pair of LED reading lights from Amazon were an inexpensive way to provide adequate lighting for the shelf without taking up too much space. The light bars are less than 1" in diameter and can be positioned exactly where I need the light with virtually no effort at all. Once the curtains are made to hide the underside of the benchwork (probably in June when the muslin fabric finally gets here) the necessary parts of construction of the supporting benchwork will be done and I can turn my attention to the small details like signs, people, motor vehicles etc, and of course the operation of the railroad. By the way, my supply of couplers has been replentished and the final two box cars are on the layout.

The two pictures above show how the loop was completed. A fold UP bridge was added along with an extension of the Phase 4 shelf. to bring the main line around to the south end of Phase 1, thus completing the loop of main line track. My son in law Gabe was a great help, doing most of the heavy lifting (carpentry) Both one leg of the  extension to Phase 4 and the leg of the 18" x  24" additional benchwork attached to Phase 1 are secured to the floor with brackets. Neither of the added pieces of benchwork move one iota, which is good because the bridge that connects the two must maintain a proper and solid relationship so that the track remains in good order and we have no derailments. The bridge track has been wired into the power buss but the new storage tracks must wait until I find enough DPDT center OFF switche to control power to each track. The bridge track wanders about a bit on the bridge but ther is a good reason for that. It was necessary to allow for a proper curve around to the main line on Phase 1. I also have a lot of painting to do on the new fascia and lumber. BTW the vertical 1 x 3 in the bottom picture is a stop so that the bridge does not hit the wall of the room when it is raised. The recliner is back in its old position, no changes there. I will be adding some amount of fascia to the bridge if only to prevent a dive to the floor if one of my engines decides to derail. I have tested the main line with one of my diesel locos and all went well but what the steam locos will do is a question that as yet has not been answered. Time will tell.

This is what the scene looked like before the changes. In effect the coaling tower was moved to cover track 2 of the turntable and the diesel fueling point with the tank was moved to the other side of the turntable approach track. THe ground cover and ballast were repaired where necessary, leaving the main line free of any encumbrances. 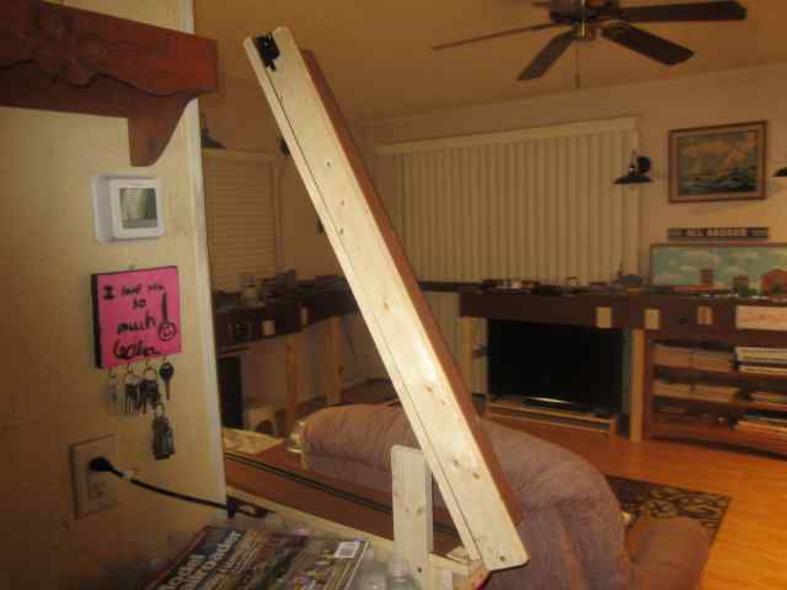 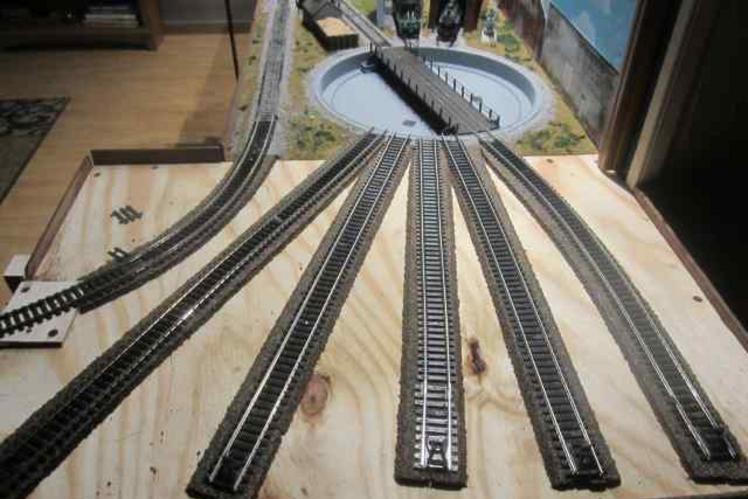 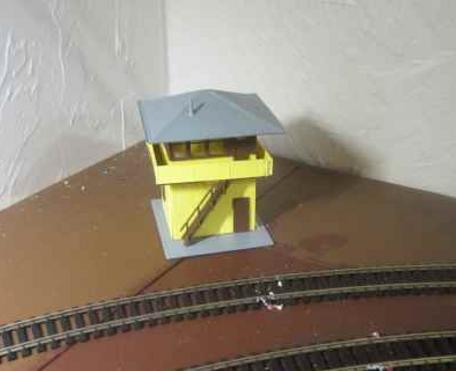 This is a photo of the latest addition to the railroad. The main line track now goes all the way round the room and a total of five new storage tracks were added. Tomorrow : ballasting and scenery.