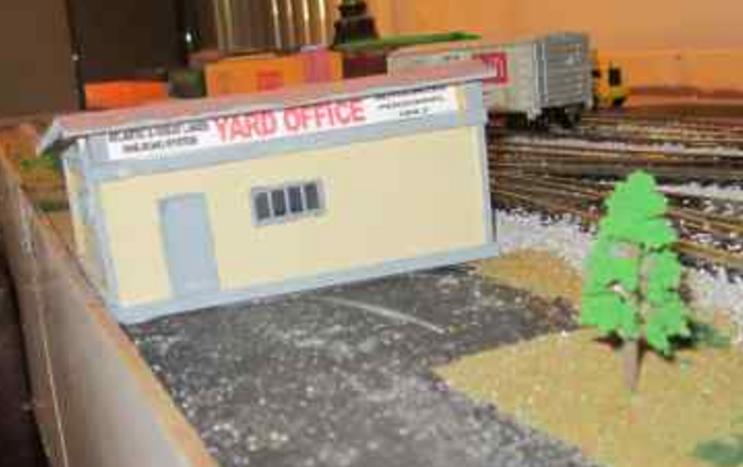 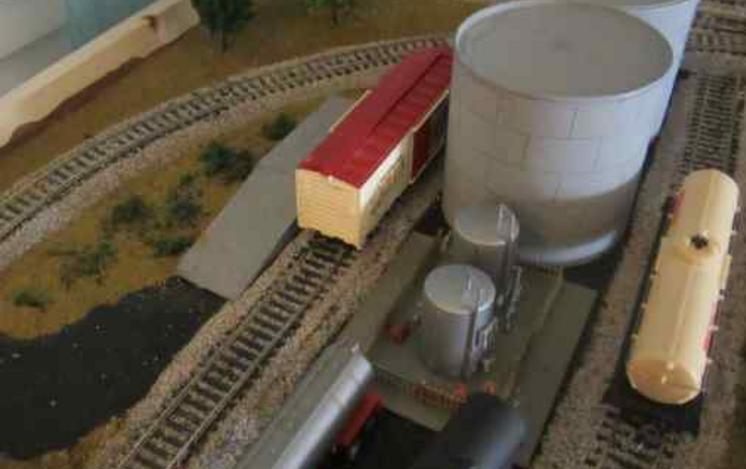 The tank farm from the original layout has been relocated to make way for a movie theater suggested by two of my grandchildren with a very cute card by the way.

Grade crossing are under construction on the extension. Finally building locations have been established, buildings ordered and roads installed. Of course this meant grade crossings had to be constructed.   They consist of some wood planks between the rails (with due care to maintain flangeways) and a liberal  dose of spackle compound to bring the road surface to the outsides of the rails. When it is thoroughly dry it will get a coat of black paint and then road markings will be added using 1/16" chart tape. A lot more turf has been put down already and trees will soon follow. As I promised, the trees have been planted and the grade crossings have been painted black to match the roads. Picures will follow once the PVA glue sets and is no longer white. Unfortunately, both of the freight houses that I purchased, one from Ebay and one from the local club, are too large for the sites I had assigned them to. So another donation to the club store is coming up. In other news, the air brush I ordered has come in as well as the cleaning pot and tools for cleaning the air brush. I have found out that one of my fellow hams also has experience using an air brush so I have asked him to give me a short course on using an airbrush which he has answered in the affirmative. It will also be his first opportunity to see the layout up close and personal as it were. I hope he will be impressed with the work I have done so far.

As I was adding two new pictures on Page 3 I noticed that I had reached my limit that suggests that a new page be started. Therefore, welcome to page 4 about my latest project, a shelf style model railroad. I have begun adding scenery to the extension that was added a few pages ago. Already the plans are afoot to extend the extension another 4 feet or so. This latest section is still in the planning stage as yet. It may be a roll-around section that can be used as a way of getting new trains on and off the layout or it may be permanent and probably be the final section of the layout. Trying to extend the layout "around the walls" would be very difficult with a sliding glass door at the end of the planned section and three windows on the West wall of the room. On the South wall of the room, my bed has permanent rright of way so as one can see further expansion will be difficult. On another note, I have just purchased an air brush setup from the model railroad club I belong to. There is a compressor with a storage tank to which I have just added an ON/OFF switch and power strip. It came with two airbrushes, neither of which worked. The Badger Model 200 airbrush has been sent off to the manufacturer for rebuilding and repair. Sometimes a lifetime warranty actually means what it says. My total cost for the rebuild is $16 dollars for shipping it back to me and they promise a quick turnaround. I bet Christmas and New Years will have some effect on the time but I have ordered a new unit from Amazon to replace the second unit. THis one will also be a Badger unit so much better there.The compressor/tank fits neatly under the layout and will plug right into the outlet I installed on the fascia a couple of weeks ago. Now maybe I can get my backdrop painted in shades of blue and white with a little gray thrown in for good measure. 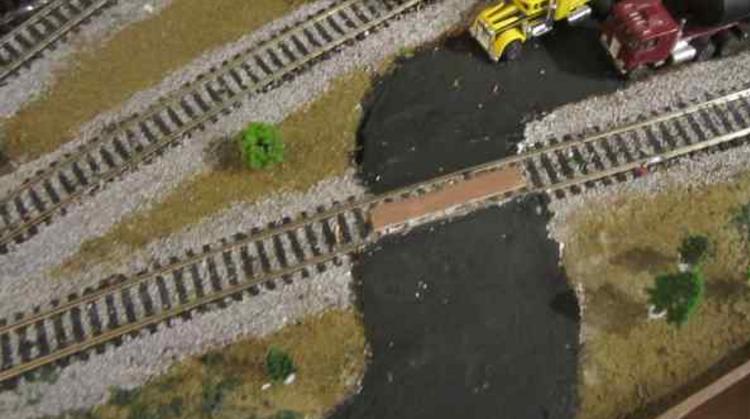 Here are the pictures I promised on the grade crossings and the newly planted trees.  The trees seem to add exponentially to the layout, without them thelayout appears flat and featureless. With the trees it is a whole different story.

The above 4 pictures show the progress being made on the extended portion of the layout. I scratch- built a yard office and a team track loading platform behind the tank farm and added turf and other scenic elements until the only area left undone is the brown area behind the 3-track yard. I am still unsure of what to put in that area although I picked up the front end loader at the club store on Tuesday so maybe some kind of construction site is in the offing. Right now I am awaiting the delivery of a HO scale movie theater that will go where the tank farm used to be. My grand daughters in Lakeland asked me to add a movie theater to the layout and I am happy to oblige.

I have begun to plan for a further extension of the layout. One major aspect is that the TV will be residing under the new section sitting on a 6 inch high pedestal or plinth. THis will still leave the TV fully visible to me from my day-bed and will not cost any new mounting brackets etc. The current design for the layout above is a port scene with a car float and waterside businesses. I am trying to position the end of track in such a way that further expansion is possible although not in the immediate future. 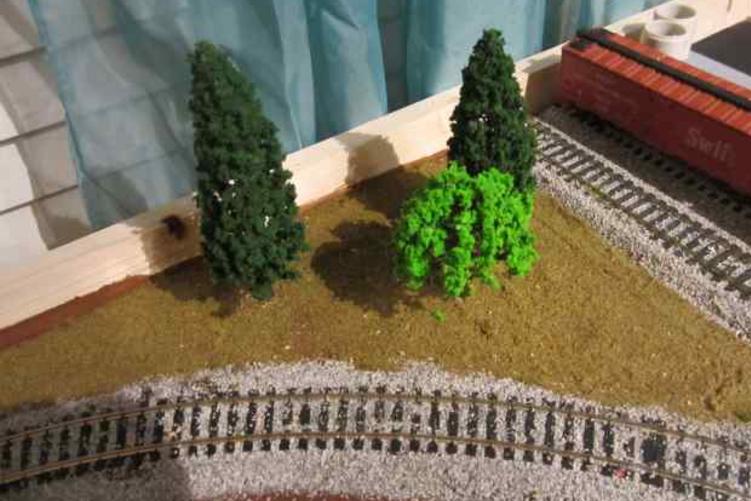 The plans for the next addition to the layout are becoming clearer. The area where the TV will reside will be 4 feet long . This will bring it within range of being able to extendthe layout across the doorway using a 36" section of removable track. This could take the form of a gate a liftout section or a tilt-up or down section. That will decided later. THe movie theater for the initial part of the layout has arrived and assembly will follow shortly. The scenery for the unfinished portions of the extension has been decided upon and work continues in that area. An orchard will occupy part of the space and a gravel and sand dealer the rest. THe office for the sand and gravel dealer was constructed out of a HO scale shipping container with a door and window added and a stovepipe on the roof. I am not sure about any structure for the orchard (or orange grove if you like) maybe just a couple of people on ladders will suffice. The gravel dealer is getting a dump truck to go with the front end loader already on site. The piles of stuff will be made using ballast, sand and extruded foam insulation carved to look like mounds and then covered in the ballast and sand. Pictures will follow on page 5 of the Model Railroad Section of my web site.