This is the basic shape of the car float. There is about 5 1/2 feet of freeboard in scale. The scale size of the barge is about 215 scale feet in length and about a 40 feet beam. The tugboat kit was purchased at a bargain price and the fittings for the car float also were not expensive. Now comes the assembly and painting of the float and the benchwork. The main parts are already here or on their way so progress is assured. I notice that I have come to the end of Page 5 since we have reached the bottom of the Navigation Panel to the left. This means that there will be a Page 6 coming up shortly. 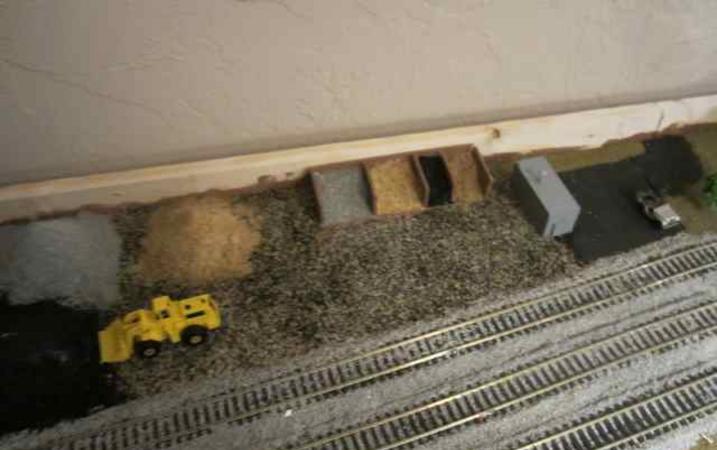 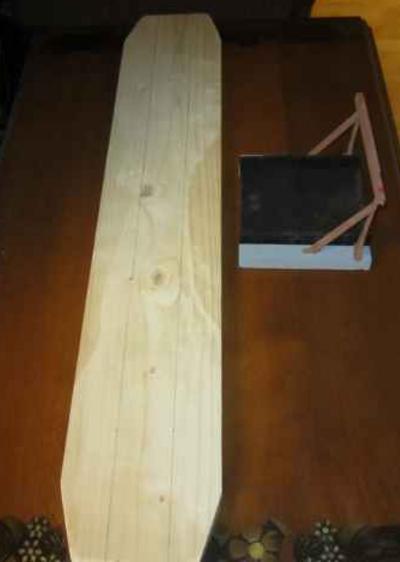 Yesterday I rebuilt the one stall engine house with a peaked roof. I think it looks much better than the old flat roof did. The corner that I cut off the flat roof has been disguised by using some parts I found in my scrap pile to make repairs. I might paint them black or brown to make them look like tarpaper roofing materials.

With the "orchard" done, the last place to be fixed up was the area to the north of the yard on the extension. I have created piles of material using paper cones and cardboard bases to build 3 piles of gravel, sand and black rock to add to the inventory of the sand and gravel dealer. I thought I was going to have to carve cone shaped bases out of rigid foam but decided to give the cardstock a shot and it worked. I have covered the remaining brown areas in a mixture of 3 of the 4 materials I had on hand, ballast, sand, and the black rock which sort of looks like coal. This has covered the last area of the extension that was not done, so for the moment the layout is done. Next we start designing the 5 foot extension to the extension. This will have a port, a car float, a tugboat and the various stuff that collects around a port. After that is done, which will be a while, since I need help with the construction of benchwork, we will think about crossing the doorway with some form of lift out section, perhaps a bridge. THe layout after the crossing will only be 12 inches wide for most of it's length but will expand to 18 to 20 inches to accomodate a second turntable. I have also decided that future locomotive purchases will concentrate on Steam rather than diesel. The other end will also have a 3 stall engine house. In the meantime I will concentrate on improving the performance of the trackage and detailing out the existing layout. I already found that one of my grade crossings had a tendency to derail the tender of my steam loco. That issue has been fixed but I am sure there are others around the scene. 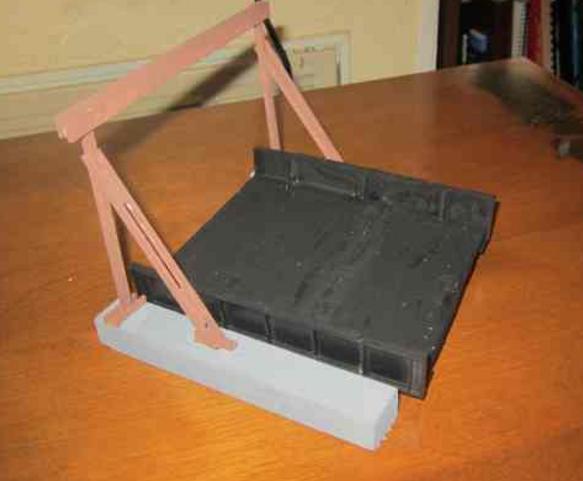 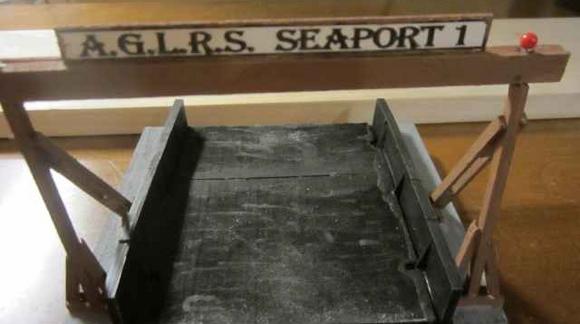 I received a gift of a bunch of trees for the layout from my daughter, Lisa. I  was in need of said trees because I had just about used up my previous supply so these were a great gift. The layout now has an orchard. To tell you the truth, I don't know if it is an orchard or an orange grove but since there are no fruit on the trees yet it is a question to be answered later. I will be adding a couple of workers with ladders in a few days. I still have to find some scrap rigid foam to make the bases for the piles of gravel and sand at the dealers to the left of the orchard. I have a dump truck on order for that site and hopefully I can find a few scraps of the foam around the neighborhood.

Two of my grandchildren asked very nicely if I could add a movie theater to the layout. Therefore, here is the Grand Theater playing "Dreams Do Come True" starring my grandkids. The additional painting is now done and the theater is resplendent in its new trim of gold paint.

This is where the sand and gravel dealer will be. The paper cones are placeholders for the piles of sand, gravel and other stuff which has yet to be created. A dump truck will and endless belt loader will be joining the front end loader all in good time. A sign will also be fabricated to give the site a name..I am afraid the desk lamp will have to find a new home. 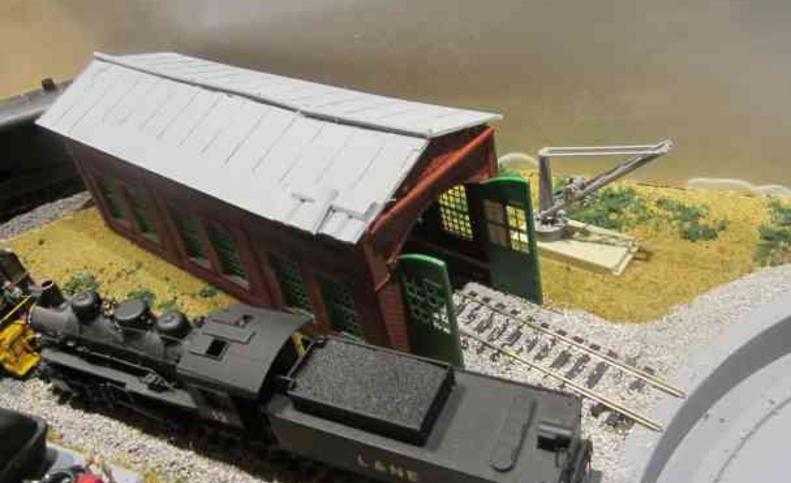 This is the latest aquisition by the Atlantic and Great Lakes Railroad System. The name was first used on my original layout over 40 years ago. I decided to bring it back because I always liked the sound of the name even though my current layout is a very short line railroad. The locomotive is a brand new 2-6-0 from Bachmann and I have already programmed the loco address from the initial 3 to 0573. On the throttle it comes up as 573 which is fine with me. It works very well and the sound decoder is outstanding.

This is the area where the orchard or orange grove will exist. I haven't yet decided which it will be. First order of business was to get the turf down. Once that is fixed in place and the glue has dried I will start drilling holes and installing as many trees as the space will hold. And that dear friends will mean that the current layout is done! Then it will be on to the next extension of the layout and the repositioning of the TV.

Preparations for the next expansion are underway. This is the apron for the car float that will come next. I cut a single track plate girder bridge in two, lengthwise and added a floor wide enough for two tracks. The floor is 3/4" above the base which will match the roadbed leading up to the apron and will also match the 3/4" height of the car float which will be made out of a 1 x 6 board about 30 to 36" long. That is my next project so I will be stopping at the lumber store tomorrow. The track for the project is already in hand. 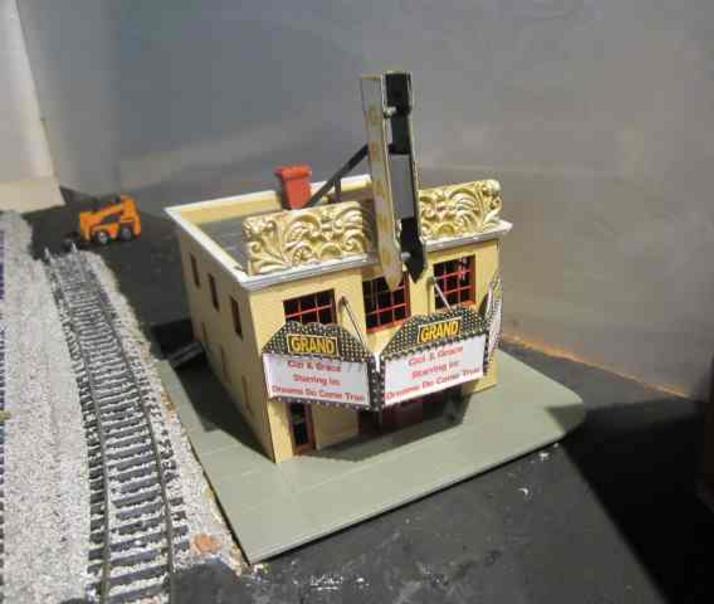