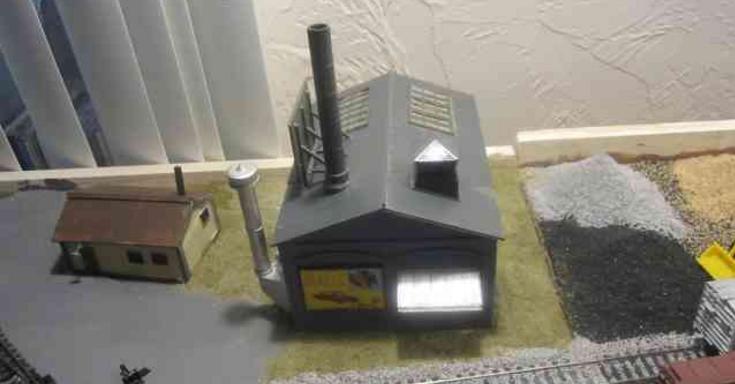 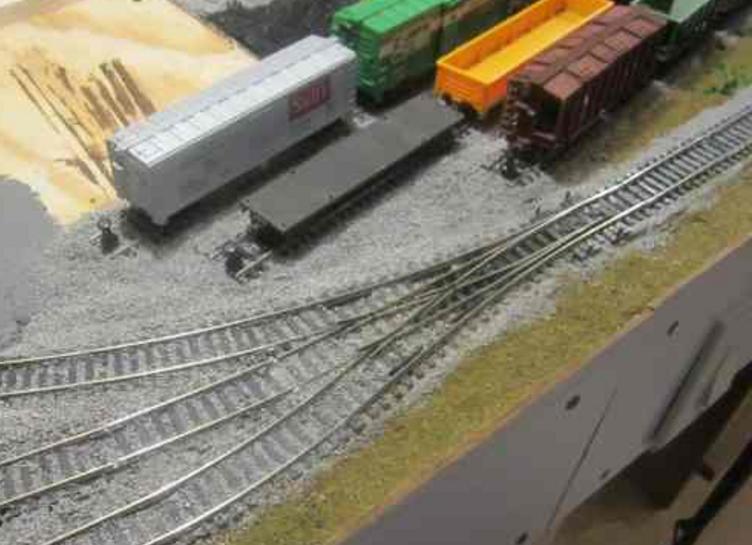 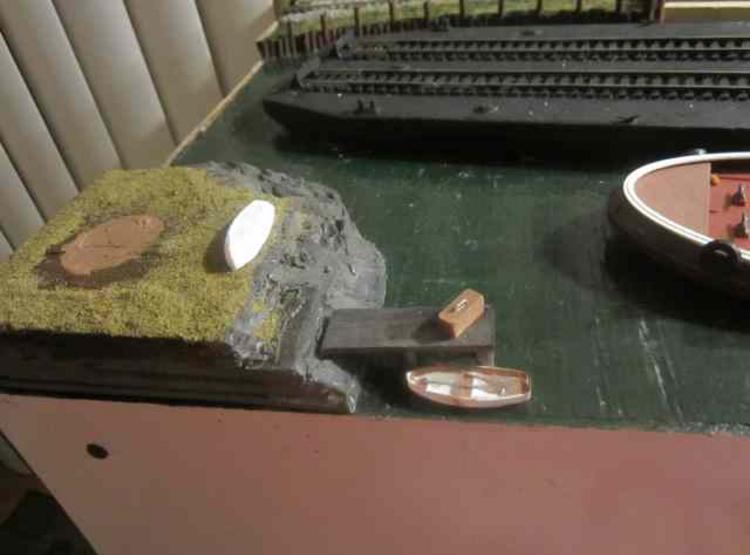 I realized that I had reached the end of page 7, so here we are on Page 8. Nothing to report yet but the night is young.

The two photos above show the latest updates to the layout. The island for the lighthouse has been scenicked, and the yard on the previous module has been extended on two tracks at least one more carlength. The ballasting is in place and secured as well. The empty spot behind the extensions is reserved for a factory I spotted at the club store the other day. At $15 it is half the price of the kit and it is fully assembled and weathered. Other than the lighthouse which my son is building for me, that will complete the layout thus far.Plans are made and materials are being obtained for the next section which will be a large one, 9 feet long and from 18 to 24 inches wide on the West side of the room. This will require a gate section to connect it to the rest of the layout so I have been studying the problem very intently and I think I have an answer. Time will tell.

This just in! The dock now has it's bitts in place, but not painted yet. The lighthouse island also has it's rowboat (with oars) in place at the little dock on the island plus another rowboat upside down on the grass above the little dock (for just in case). The mailman was his usual slow self today, as always since we lost our usual mail lady. So the crossbucks I ordered, which were promised by today never came. The USPS at least in my area seems to be getting worse and worse. They used to show up by 11AM now we are lucky if they show up by 5 PM. Oh well I see some painting in my future tonight.

Here are 3 of the new bumpers. The red paint did not stick to the plastic of the Hayes style bumpers too well so I suspect I will be repainting them with a brown acrylic later. They do look a whole lot better than the push pins that they replaced..

The above pair of photos show the latest update to the layout. First the final structure has been installed on this side of the layout. The scenicking around it is also complete. And secondly, all of the grade crossings on the current layout .have "railroad crossing" crossbucks in place. Now I have to wait for help to arrive before I can expand to the other side of the room. This also will require a "gate" to carry the track across the doorway. I have been reading up on this subject and I think I have the problem in hand. Only time will tell. Well, it is another day and it turns out the gate idea will not work, primarily because I have to maintain a 33" opening at a minimum because that is how far the sliding door that the gate crosses will open. Not to fear, I saw another idea on "Youtube" and it is actually better and easier in one sense than the gate would have been. In the new method a large hinge is attached under the bridge and behind the benchwork. The bridge can then lift up at the far end while the other end sinks below the level of the benchwork. Not only that but it will be self storing as well because the hinge will allow it to swing over center and thus be stable in the "up" position. The mating end at he far end of the bridge simply needs to capture the end of the bridge and keep it alligned with the track. The hinged end should align itself easily because it will be quite near the hinge point and in my particular situation the track will align of the side of the sinking portion of the bridge rather than the end. If I work the electrical contacts correctly the bridge itself will provide the safety factor of causing both approach tracks to go dead anytime the bridge is not down and locked.

In the meantime, I have added a couple more cars to my maintenance of way fleet while discarding one car that I just could not get to operate properly. I have also received some end  of track bumpers modeled on the standard Hayes bumpers seen all over the country. I am waiting for a few other items which will start arriving on Monday. I also got the 14 foot coil cord for my 2nd throttle and it is already in service.

Yesterday, I came across a problem that initially confused the heck out of me. I was running my 2-6-0 engine onto the car float apron (something one would never do in the real world) and discovered that the engine would not go onto the right hand track but would go on the left hand track of the car float and would also operate fine on the track that will eventually cross to the other side of the room. I tried cleaning the track but the problem remained. Finally I got out my multimeter and discovered that right where the loco stopped the track voltage was down to about 6 volts AC. I tested several other points around the offending spot and discovered that it was merely the worst of the lot. The track voltage was down everywhere on the latest module and that one track to the car float just got the worst of it. The solution was simple. Drill some holes and add more track feeders and more track buss wires. Once I did that the problem was solved. a good 13 to 14 volts AC everywhere on the layout. I should point out that I have uprated the track power buss to 14 gauge wire with 22 gauge feeders. I terminated the track power buss with a PowerPole connector at the far end so that when I get the next section built I will be able to just "plug it in". The location is also where the lift bridge that crosses the doorway will set down so that is convenient. 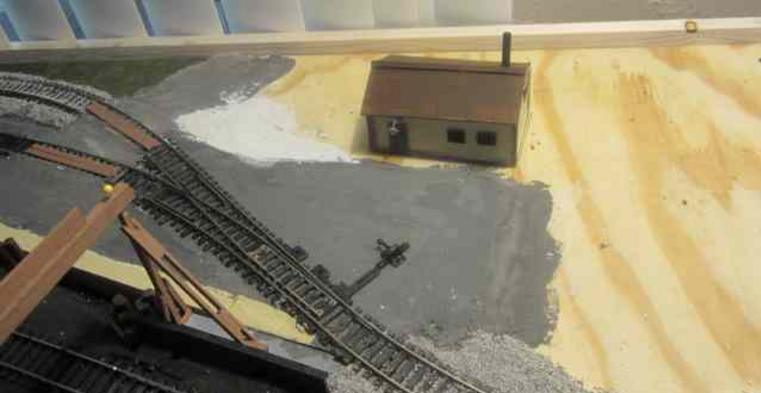 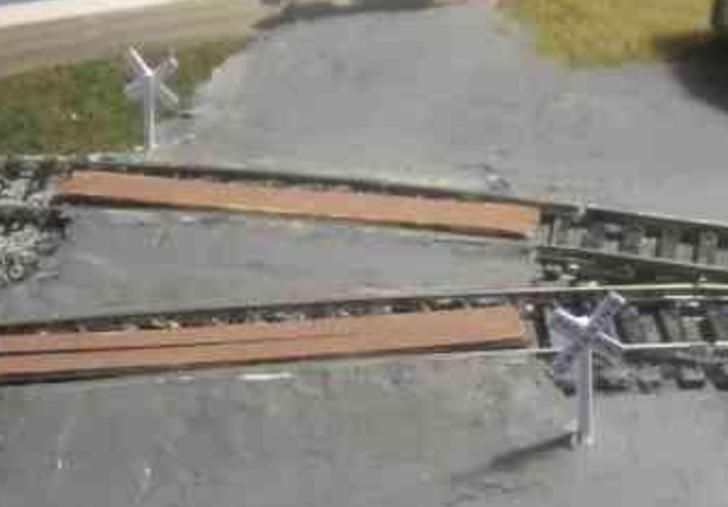 A bit of progress has been made. The dock/yard masters office has been built, the access road to the dock has been modified and an island has been created to carry the lighthouse whenever it arrives. Right now it is just a couple of scrap pieces of plywood, but with an application of sculptamold it will look much more like an island especially once the lighthouse is on top of it. Plans include a small dock for the lighthousekeeper's dory etc. Note that the expansion of the dock road has not yet been painted since the spackle is still damp. Well, it is now a couple of days later and the dock road has been painted. The ground cover behind the dockmaster's office has been laid down and the island for the lighthouse has been covered in drywall mud and painted a dark grey. More paint in different colors will be applied, mostly via a dry brush technique to create the look of real rock. 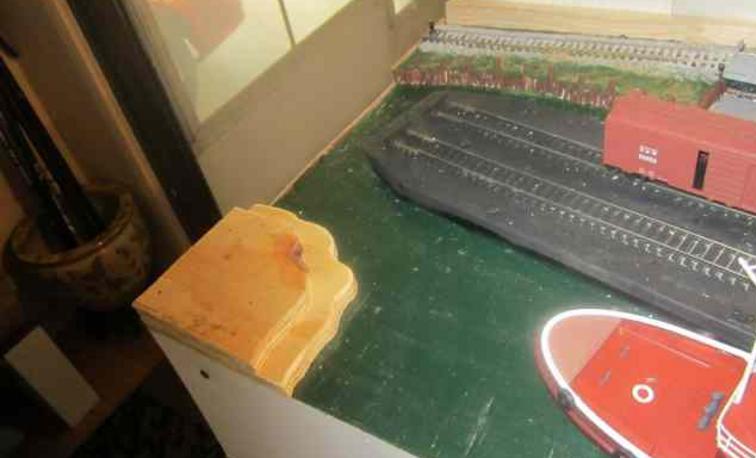 The bitts have been installed and painted rusty brown. This pretty much finishes the dock part of the scene, just the cannery to be installed in the blank spot beside the dockmaster's office. BY the way, I did practice loading the car float using the idler flat cars and it went pretty well. I found a bit of dirty track but that was soon resolved.

I have been in contact with my son in law Gabe and it looks like he will be coming down soon to assist in the next phase of construction on the layout. I have most of the materials on hand already except for about 7 1 x 3 x 8 foot boards, a hinge and a couple of angle brackets to secure the legs to the floor at the end where the hinged bridge will be to the current layout. All the plywood is already in hand and I even have some 1 x 3 left over from the last construction phase. The new section will be as fasr as the railroad can go for the present time and even if it gets expanded a bit more it will only be "staging" tracks. I had to remove the two shelves on that side of the room as I felt they would only be in the way during construction. I may reset some of the shelving after the benchwork is in place. I also plan on adding a few more of the 24" drawer units that I sourced from Target during the first phase. I am already running low on storage space even now.

Today, February 20th, I picked up the flextrack from the club store that I had put away for me a couple of weeks ago. It is 10 sections of code 100 nickel silver flex track and will complete my purchasing of materials in advance of the new benchwork coming soon. The onl;y things to build or buy after the benchwork is done will be a couple of industries and the scenicking supplies to finish this new portion of the layout. I have decided to forgo the idea of a hinged span to connect the initial layout with the new portion (I have to cross a doorway to connect the two) in favor of a simple lift out span. I live alone and I probably will be the only operator of the layout. Most people who come to visit either come in via the back door or if they come through the front door I will have plenty of advance notice of their arrival. Thus a simple lift out span does not pose a problem. I will use a PowerPole connector system to power the tracks on the lift-out and I will not worry about a safety shut down on the approaches to the span since I will be thje only operator so trains will be stopped anyway. Well that is about it for now but I see I have reached the limit for page 8 so page 9 will be coming up next.