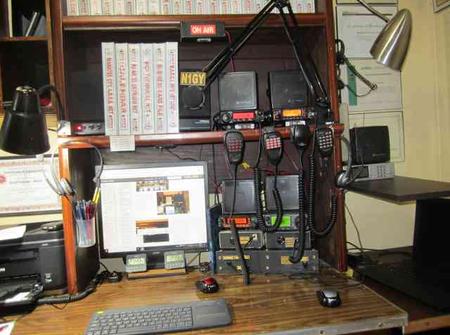 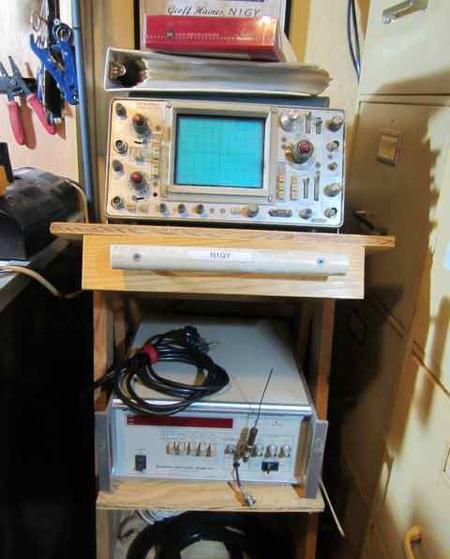 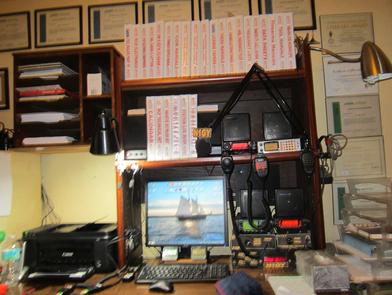 The new mic selector under the IC-706MkIIG. Since this picture was shot the 706 and the 7800 have been swapped side to side. 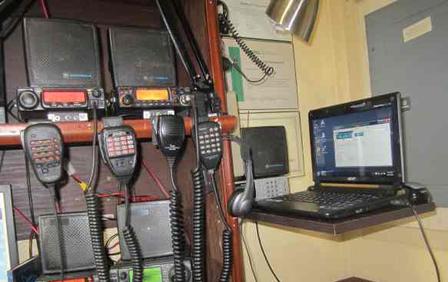 I have replaced the older photo of the radio room operating position as I realized that it was very dated and the recent replacement of my old Kodak 3 in 1 printer with a new Canon unit caused a major redesign of the left hand side of the operating position. I have moved the printer down to the desk top and installed a shelf above it to carry the old music stand that I use for storing printer paper, card stock and various other supplies. Although they are hard to see in this photo, I have also rebuilt the headset adapters for my IC-706MkIIG and my FT-7800R into much smaller enclosures. Besides making them look much more modern, they are also easier to hold in the hand while running a net. I also added a mute switch in a similar enclosure so I can mute the scanner in the radio stack while I am talking on one of the transceivers. Another major change is the addition of a 1.25 meter radio, a Jetstream JT-222M. With two 220 repeaters now on the air locally it seemed like a good choice.

The workbench side has not changed a lot. The big project there was using a labeler machine to rename all of those little boxes containing small parts. The TV in that photo was replaced a couple of years ago with a HD unit a bit larger, thanks to my son, Steve, KC1AJC.

The oscilloscope to the right of the workbench has been joined on the cart by a very nice lab grade frequency counter thanks to a fellow ham.

​              Another change from last year is the presence of a new desk-top computer. Much faster and with a ton more memory than the old laptop. By the Way, the old laptop running Windows 7 has not really been retired. I use it for traveling and events.

There have been a slew of changes to the radio room over the last several weeks. The deterioration of the LCD display on the IC-706MkIIG necessitated the addition of a laptop to the operating position so that I could run a program called "Commander" from DX Lab. THat allowed me to see what the LCD was trying to show me, namely the frequency that was obscured by the degredation of the LCD.

That suggested that a shelf could be installed on the right side of the operating position about 12 inches above the desk top and just to the right of the radio stack. A trip to the local Home Depot got me a pre-finished shelf 24" x 10" in a color that pretty much matched the wood of the operating position. Not exact, mind you but somewhere in the range of the different browns around the room.

With the shelf installed, I repositioned the scanner radio to the rear of the shelf and left the front portion of the shelf vacant, at least until the new to me net book arrived from a friend. THe net book willhave only "Commander" software on it, other than the OS. The smaller computer will in essence become a permanent replacement for the LCD display and be positioned directly to the right of the IC-706MkIIG

All of this fiddling about has cleared abot 4 square feet of space to the right of the operatiing position for future use. That use will be determined later On the other side of the room (which is not shown yet on this page) a ton of old catalogs and other useless stuff was tossed which made room for another shelf and a bunch of tools that were hidden behind other tools before. That has made finding my more esoteric tools much easier. It also allowed me to find roomfor a Christmas present from my son. The present is an 18" bending brake whioch will allow me to create my own metal enclosures for various electronic projects. Often times the enclosure turns out to be the single most expensive part in the project. Being able to bend up my own from scrap aluminum sheet will save a lot of cash better spent on the electronic parts. I will add more pictures or replace others as needed

The photo to the right shows the one addition to the operating position since the lead photo was taken. I built and added an "ON AIR" sign. It is illuminated and wired so that when I turn the radios on, the sign lights up and goes off when I turn the radios off. This new shot also shows the new shelf on the right side and the new 2 meter rig on the upper shelf right side. 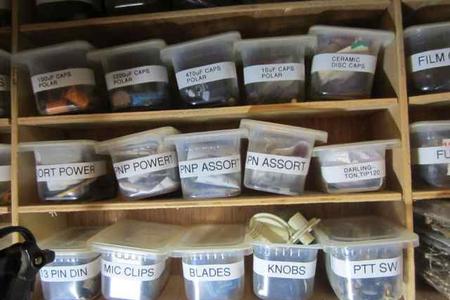 The previous op position. Notice the longer mic selector under the IC-706MkIIG. which has since been replaced by a new shorter one.

On the far right side of this shot you can see (at least partly) a pair of four drawer filing cabinets that hold all kinds of stuff, mostly larger pieces and my stock of things like speakers, radio brackets, and the like. One of the drawers is for stationery such as envelopes and other stuff. 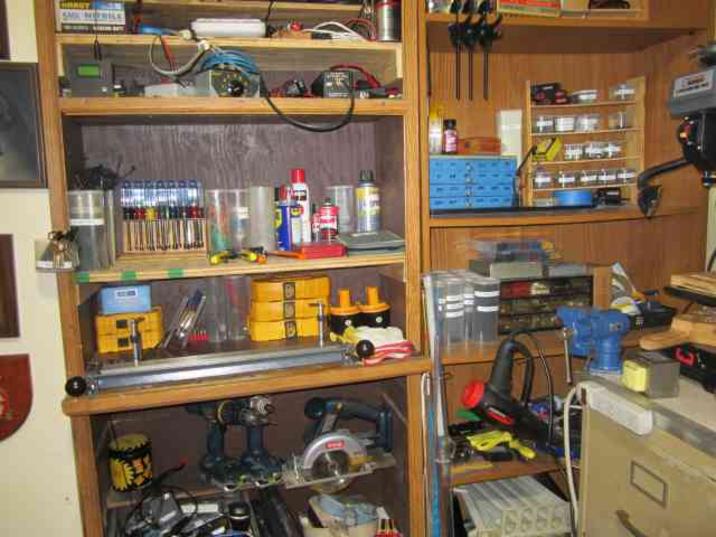 Here is a close up of the ON AIR sign. I used the shell of a long dead computer "Brick" power supply and cut a rectangular hole in the top, which is now the front. A piece of clear plastic was glued into the opening and then a printed "ON AIR with a red background was glued behind the clear. Three "grain of wheat" bulbs light the sign up. It was wired into the power feed for the radios so it turns on when the radios do. The picture below the shot of the ONAIR sign is of the Net Book that has replaced the larger laptop to diosplay the frequency of the 7062G. I have a new power supply coming for it today that will tuck away out of sight better for a neater install.

This is another close-up this time of the small containers I use to store small parts and assorted components. They used to hold baby food but they make perfect containers for resistors, capacitors, small switches, etc. 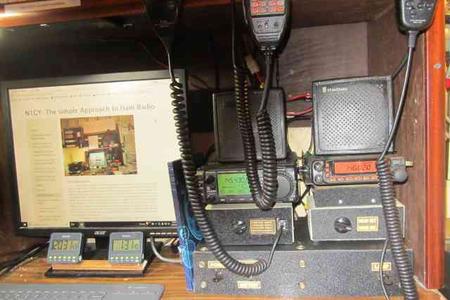 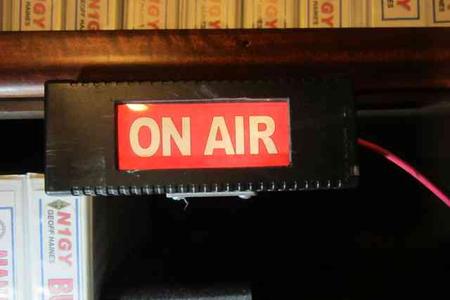 Here is  a close-up of the cart with the scope on top and the frequency counter beneath. The bottom shelf is reserved for spare coax and ladder line.. 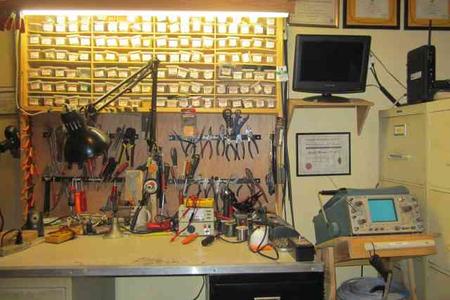