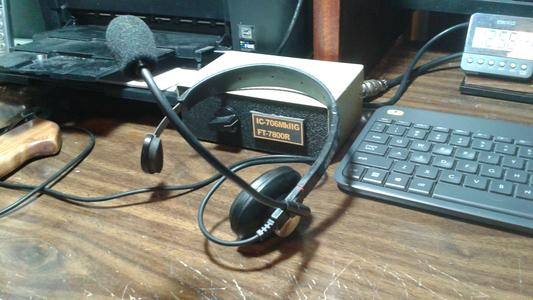 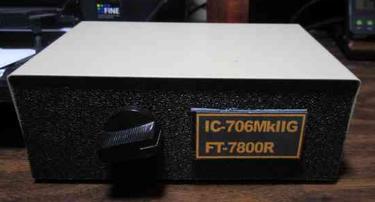 Recently, the operating position at my station was plagued by severe RFI getting into my home-brewed headsets. It did not affect the hand mics and it almost certainly was from an external source. The problem for me was that I had not made any changes in the radio room that could be the cause of the interference. The RFI appeared to be a 60 cycle hum that was very annoying both to me and to other stations.

My first response was to remove all of the home-brewed gear and see what the result was. Answer: no RFI. I then dragged out my old and very well worn Heil Traveler headset that I had not used in about 12 years. I was not even sure it would work at all. I reinstalled the mic selector box for the IC-706MkIIG after I added a grounding connection to the station ground and hooked up the Heil headset to it. NO RFI at all. I did have to raise the mic gain on the 706 a bit since my home-brew headsets were fairly hot. The audio was reported to be clear by those who responded to my request for an audio check.

That seemed to solve the problem for the Icom, but now I had to consider the Yaesu FT-7800R right next to the 706 as it also was suffering with RFI. The idea of having to buy a second Heil headset (which by the way has been out of production for years) was not in the budget. Then the old light bulb over my head went off. Heil sells an adaptor cable that will connect the Traveler to the FT-7800R. OK, I ordered one from HRO and it was soon on it's way to me.

Now I was back to the same problem that engendered the microphone selector boxes in the first place. How to minimize or even eliminate the plugging and unplugging of gear every time I want to switch the headset from one radio to the other. It occurred to me that since either the 706 adapter cable or the 7800 adapter cable can be plugged into the headset, then the wiring for all of those "Foster" plugs must be identical. You may know that plug by another name (8 pin Round) or something else. They are all the same male and female round 8-pin plugs and jacks that most transceivers came with before everyone went to the modular plugs most radios use now.

This made the construction of a selector box easy as abc. Two female foster plugs and one male foster plug were wired identically into an A-B data switch box. I will admit that I had the selector box built before the adapter cable arrived from HRO. This did slow things down a bit when I realized that I had not made the cable from the box to the 7800 adapter cable long enough and had to redo that part so I could keep the "radio selector box" where I wanted to place it. Basically out of the way of my keyboard. Once that was done, I hooked everything up and tried it out. By the way, I also added a ground connection to the mic selector box for the 7800. Upon asking for an audio report I was told I had a good clear signal on both the 7800 and the 706. Success!!! Below is a  photo of the new "radio selector box" and the old Heil Traveler headset. Behind the box you can just see the "Foster" plug that connects to the 706. The one for the 7800 is out of frame on the other side of the computer monitor. I have since added a few more pics of the set-up to more clearly show the "Foster" plugs and jacks

I participate in or act as Net Control on several nets every week. It has always been important to me to have a clear signal coming out of my transceivers. I do plan on retesting the home-brewed headsets and adapters to see if grounding the selector boxes solved the  RFI problem but for a while yet I am going to use the Traveler.

This is the new W2ENY headset as supplied by Bob Langston, W2ENY. Very nice unit. Mic is quite "hot" so I had to lower the mic gain a bit and also move the mic further away from my mouth. Very comfortable to wear and having the receive audio in both ears was surprisingly nice.

To the left is the in-line connection going to the Icom IC-706MkIIG. This is what I call a "Foster" plug.

This setup unfortunately did not last too long. The Heil Traveler headset had been in storage for about 13 to 14 years while I used headsets of my own design. About a month or so after setting up the system shown above, the Traveler headset unfortunately died. The transmitted audio went all fuzzy and mushy, naturally right before a major net for which I was Net Control. I immediately ordered a headset and adapter from Bob Langston, W2ENY up in New York State. He not only sent it down but was also able to supply me with a much longer adapter to fit my particular needs. After a few tweaks to the mic gain and headphone volume control the headset works great. There were a few mis-steps in designing a "radio Selector box" similar to the one in the pictures above. I have delineated those on page 5 of the Updates from the Radio Room. 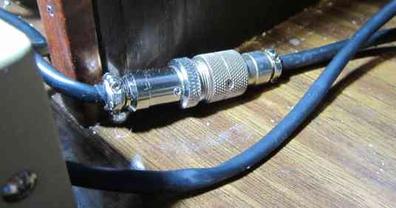 Recently, I purchased another headset from my local Office Depot. At less than $20 it seemed like a good deal and a quick test of it's operation in place of the headset shown in the picture above showed that the audio quality on both transmit and receive was comparable. The big difference is that the new headset is single sided. By that I mean it has only one earphone rather than two. For some reason I like that style better than having both ears covered. I don't really know why, I just like having one ear able to hear what is going on around me. 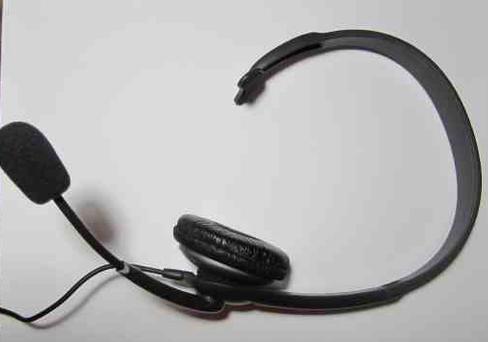 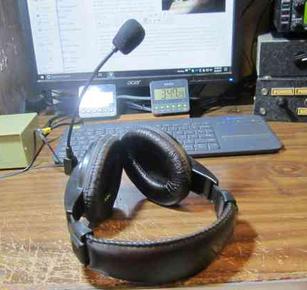 Here is a photo of the new headset. The foam cover over the mic is available from Tower Electronics.

THis is the new "radio selector box. It switches the headset and PTT from the Icom IC-706MkIIG to the FT-7800R and vice versa. It was built from a brand new AB data switch meant for VGA use (15 pole 2 throw). This setup only uses 6 of the poles so there are plenty of positions left if any set of contacts goes belly up.

Here is a better closeup of the radio selector box. Very simple. I chose to build it with all three connections, the headset and both radios, coming out of the back of the box with in-line connectors rather than try to mount a connector on the front for the headset.

To the right is the other "Foster" plug going to the FT-7800R. This was the one that slowed the project down by an hour or so as I had to replace the cable coming from the selector box with a longer one (by about 18") because the HSTA-YM6 adapter cable was shorter than I expected. In order to place everything where I wanted it, the cable from the selector box had to be lengthened. 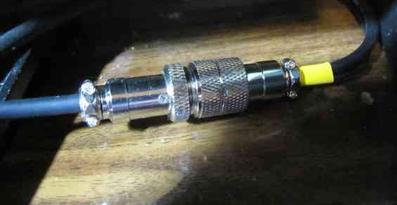 THE NEW HEADSET SYSTEM AT N1GY