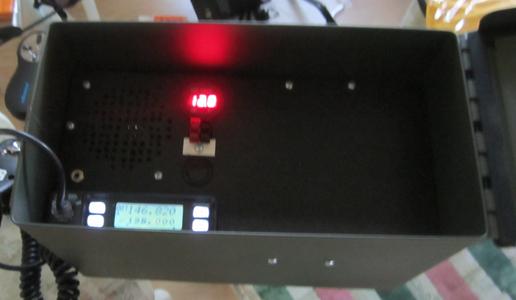 The changes were numerous. First I was able to place two 7 AH SLA batteries in parallel. I installed a speaker with a headphones jack inside the box rather than attached to the outside of the box as before. The taller ammo can provided space above the batteries for the charger, the microphone, the manual and the portable antenna. The headphone jack automatically switches the receive audio from the speaker to the phones when they are plugged in. Adding the headphone jack was the answer to the noise level on the train.  I also added a voltmeter in parallel with the radio. The current draw of the meter is between 5 to 15 ma. so power drain is not a problem. A switch controls both the meter and the radio. Two sets of Power Pole connectors allow for recharging the batteries and also for supplying power to various accessories like USB lights or USB chargers.

It is not unusual for me to do such a complete redesign after so little time Often the first design, once tested in the field or looked at by different eyes will reveal problems or design flaws that were not apparent on the first go round. When I added the speaker to the old setup I realized that that way just did not work properly. A complete redo was the only option. The ABS panel covers not only all the wiring but also hides the batteries   and allowed me to add a fairly professional looking speaker installation by drilling a series of holes through the ABS panel following a grid drawn on the back of the panel. A couple of small scraps of the same material were heated and bent to form a pair of clamps to hold the speaker in place. More scraps, this time of 1/2" plywood were screwed to the sides of the can to brace the batteries and to provide support for the ABS panel which was secured with small screws.  A hole was drilled in the side of the ammo can to install a barrel connector with two nuts, inside and out so it will stay secure and a short coax jumper was fashioned to connect that to the SO-239 on the back of the radio. A flexible antenna terminated in a UHF mount (PL-259 style) is stored inside the ammo can and then attached to the barrel connector for use.

Because of the layout of the components the normal operating procedure would be to lay the ammo can on its side (away from the antenna connection) and remove the lid entirely. One then has the radio right side up facing the operator and the antenna is vertical extending from the ammo can. One could just as easily run a length of coax from the barrel connector to an external antenna for even more range. This radio has since been sold to a fellow club member, so no further updates will be made on this unit.

UPDATE: Big changes to the portable 25 watt rig I wrote about above. The other day I realized that I could pick up a much larger surplus ammo can in which to place the JT-270MH. For less than $16 I became the proud owner of a brand new 50 cal. ammo can. The old container pictured above was deconstructed and I spent a pleasant Sunday designing and building the new unit. 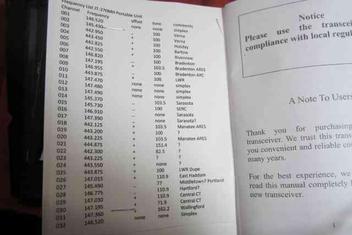 The other day I chanced upon a new offering from an old friend at Quicksilver Radio Products. John has been a good friend for many years and he often has new and useful products for the amateur community. The item in question was a "radio in a box" complete with battery power and an antenna. Now I have no argument with the cost, it is a great little product and I buy from John on a regular basis. In this case I looked around the radio room at N1GY and discovered that I already had almost all of the components on hand. An empty ammo can, a 7 AH SLA battery, a 25 watt dual band radio that I bought at Orlando Hamcation this year, programmed and then put away as a spare, some aluminum angle material and most of the little bits like a switch, an SO-239 and I obviously had enough Powerpole connectors since I had just received an order from Quicksilver of 100 sets.

The first iteration of the Radio in a Box III was done with an ammo can that used to hold .30 cal ammo and it turned out to be too small for the purpose. I could only accomodate one 7 AH SLA battery and even then some things like the external speaker had to be mounted on the outside of the box. Obviously an upgrade was in order

Some thoughts about the choice of radio. The unit is a Jetstream JT-270MH a 25 watt version of the same radio I have written about before when I radio-equipped my mobility scooter. The current draw for the higher powered unit is about 3.5 amps on transmit at full power. However, it can easily be turned down to a lower power level at which point the current draw is about 1.8 amps at 10 watts or even 1 amp at 5 watts. Also that is only on transmit, the draw on receive is 78 milliamps so one 7 amp SLA battery should be good for at least 24 hours. With the upgrade to a larger ammo can I was able to install two 7 AH SLA batteries under the ABS panel and still provide a method of charging the batteries.

When we used this radio to do a little "railroad mobile" operating at the Florida Railroad Museum several weeks ago, we discovered that there was a significant amount of noise because of operating from an open train car. It is simply not feasible to use a closed air conditioned railroad car as there would be no way to get an antenna into a usable position. Therefore, a few mods needed to be made to the 25 watt portable radio to alleviate the noise problem.

The Radio In A Box Mk. III