The other day I decided to replace the two batteries in my mobility scooter. They are not cheap. The two replacements came to almost $200. Since there was no core charge on the replacements, I took the old batteries home with me to see what I could make of them. The chargers that I had at home were more suited to smaller 7 AH batteries but I hooked the newly released batteries up and attempted to charge them up. First I had to make harnesses with power pole connectors for each battery. In about 2 days both batteries were fully charged. In the meantime, I ordered two inexpensive 2 amp chargers specifically designed for SLA batteries. I also shopped around and found two battery boxes suitable for 33 AH batteries at a local battery store. I looked around the work room and pulled out enough Power Pole Connector sets and 12 gauge wire to build two harnesses which have one set of connectors at the battery end and two sets which I installed into the lid of the battery boxes. In the future I may add a voltmeter together with a switch that will connect or disconnect the meter from the battery.
33 ampere hours is enough power to keep a radio set on low power going for a good long time. The securing straps that came with the boxes were installed in such a way as to lock the top to the box and secure the charger that I had ordered to the top of each box. That way the charger is always available and does not become separated from the battery. Any source of 110 AC can be used to recharge the batteries, generator, inverter or mains power.

On the left is the battery pack all sealed up and on the right a view of the battery itself and the simple harness that feeds power to whatever is connected to the PowerPoles on the lid. There is a set of powerpole connectors in the middle of the harness so that any additional options like meters and other feeds like USB chargers can be added without having to build a whole new harness. You will note that I placed the double PowerPole connectors in such a way that they do not interfere with the battery terminals. Any additional options will be placed in a similar manner. 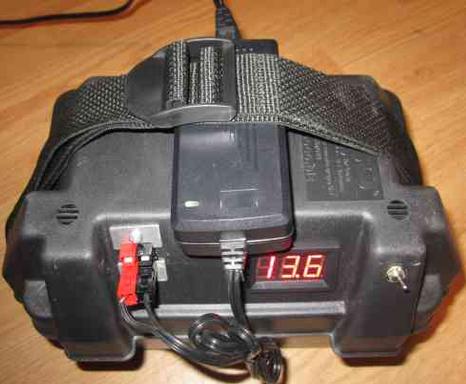 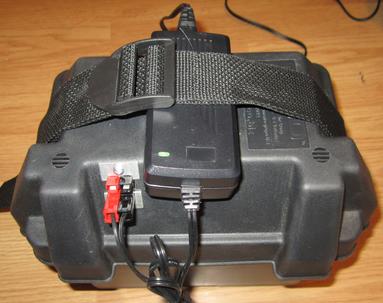 Here is a close=up of the final design for the U-1 Battery power source. A digital meter has been added with a toggle switch just to the right of the meter to turn the meter on and off so as to not drain the battery by wasting power just to read the meter.

One of these units has since been sold to a fellow ham. The other is now assigned to the Large Go Kit. 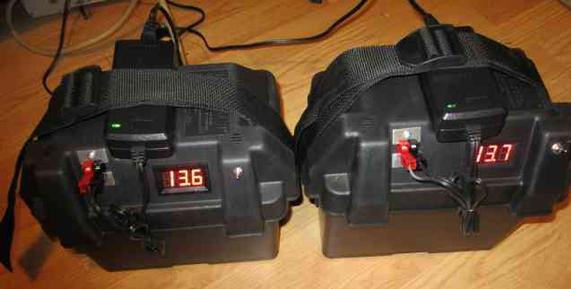 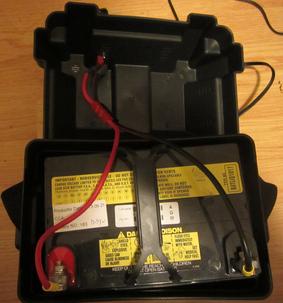 Here is a view of both units. The cost to build with new batteries runs to about $120 each. I used batteries that were removed from my mobility scooter after 2 years of very rare service. Both batteries charged up just fine using the 2 amp chargers visible in the photos.