Recently, I had occasion to visit my son and his family for a few days. While there, I discussed my desire to have a neater and more sophisticated radio installation in my personal vehicle, a 2014 Dodge Grand Caravan. The main problem was hiding all the various wires and cables to and from an Icom IC-706MkIIG and a Jetstream 220 mobile rig. My preference has always been to put any additions to the car such as radios, navigation units like GPS’s, and any accessories such as USB chargers, CB radios and the like on a separate switched circuit so that when the radio or other device is turned off it is completely disconnected from the vehicle battery. It may come as a shock to some, but the IC-706, for example, does not really turn off when you hit the “power” button. Because the 706 is basically a computer driven radio, certain circuits stay on in the background in order to respond to the power button being pushed to “turn the radio on”. This current draw can be significant. It has been measured at greater than 0.2 ampere hours. If one turns the radio off using the “normal” switch on the radio and then departs for a two or three week vacation, one may come back to a vehicle with a dead battery. It is for this reason that I always power any vehicle mounted radio through an outside switch. The radio will still come alive when the switch is thrown, but it will not place any drain on the battery when the switch is off.

Between my son and I we came up with a design for a switch box that could hold up to 4 switches and power, in my particular case, three separate circuits all fed from a single source from the vehicle battery and protected at the battery with a 30 amp fuse. I chose to wire all three switches and feeds with 12 gauge red/black zip cord, mainly because it would mean that any of the three switches could be used to power high current (<20 amps) without having to redo the wiring. In fact only one switch is used for high draw situations at the moment. It powers the IC-706MkIIG and the 220 radio. The second switch controls power to an auxiliary connection with three PowerPole outlets in one of the storage compartments in the center console. One of those PowerPole connections is used to power a triple USB charger module for charging cell phones or tablets etc. The other two PowerPole outlets are available to power whatever I might need. My FT817ND for example or a CB set for occasional use to get traffic updates while on long trips. The third switch controls power to a dashboard mounted GPS navigation display. There is a fourth switch position in the design which will require drilling out the hole to accept a manual switch for my screwdriver type HF antenna. Right now the antenna is automatically controlled by a Turbo II Tuner unit but I did want to keep my options open. That fourth position could of course be filled by another illuminated switch to control an additional circuit.

Once the design for the switch enclosure was finalized, the next question was how to construct it. My son suggested 3-D printing and informed me that he had just such a printer at his office. He down loaded the software to convert my rough sketches into a polished drawing that the printer would need and with lots and lots of help from him, we got the design whipped into shape. As luck would have it, the printer was equipped with a black filament so the color was appropriate for combining with the amateur radios which usually come in some variation of basic black. After the printer was done, no short process believe me, it took some 14 hours to print a tapered box about 5 and ½ inches wide, 2 inches tall and about 4 inches deep. The back end of the box was only about ½ inch deep hence the taper I mentioned before. This was done deliberately to fit better into the storage compartment at the front of the center console. As a final touch, my son added the labels for the three switches “RADIO    AUX   GPS above the switch positions and my call sign N1GY underneath the switches. All of this was integral to the printing process. Once the print was done we had to remove a fair amount of “structure” that the printer adds to the job to support flanges at the bottom of the enclosure. The box was actually printed upside down with what would be the top of the box on the bottom of the printing space and the eventual bottom of the enclosure at the top of the print. This “structure” is very frail framework to support the flanges which would otherwise have nothing to “stand on” without this framework. After the print job, a few minutes were spent with a chisel scraping out the “structure” and leaving the desired openings clear and available for the next step.

That next step I just mentioned was the installation of three 30 amp rated illuminated rocker switches purchased from Radio Shack. I standardized on these switches long ago since they are well rated for the task and are available at any Radio Shack store should one misbehave. And as a matter of fact one did. The very next day I noted that the illumination had disappeared from the GPS switch. The switch still worked but the indicator was dead. It was a pretty simple matter to replace the switch with a spare and carry on.

The underside of the box was closed up with a properly sized piece of thin foam similar to mouse pad material. It is held on with double sided foam tape and when the box is installed the foam “lid” rests against the top surface of the Jetstream 220 radio.

The other fabrication done for this project was the creation of a suitable bracket to hold the 220 radio and the switch box together and reasonably secure both to the center console. For obvious reasons I wanted to keep screw holes to a minimum and certainly not in high visibility locations. I used a material that is available from many plastics suppliers although it may be easier to buy smaller quantities from a local sign maker. Not the kind that appear to be on every second street corner, but the kind of firm that builds the big signs in front of offices and hotels. This material is called ABS sheet and it is about 1/8” thick and has a smooth side and a textured side. It comes in 4’ x 8’ sheets just like plywood. I find it is easiest to put together a group of 2 to 4 hams and split the cost which will run about $60 to $70 per 4 x 8 sheet. Often the sign maker will agree to cut the sheet up into more easily handled 4 x 4 0r 2 x 4 pieces. One 2 x 4 or quarter sheet of this ABS plastic will supply many projects. In this most recent project I made a paper pattern after measuring the box and the 220 radio and the distance and angle to the pair of cup holders between the two storage compartments. The front compartment holds the 220 radio and the switch box, the rear compartment will hold the CB when used and also holds the USB charger module. The brackets for both the 220 radio/switch box and the CB have two “fingers” which fit into the cup holder are in such a way that the cup holders are still fully useable. The “fingers” keep the radios from moving around and yet they can still be easily dismounted when needed. The brackets were cut out of the ABS sheet using the aforementioned paper pattern. A combination of clamps and lumber to form a bending jig was aided by a heat gun available from several sources such as Harbor Freight. After sufficient heat was transferred to the ABS it was easy to push the plastic around the lumber form to get a nice tight bend. The bracket was then bolted to the radio in the usual manner, albeit with only two bolts instead of the usual four. The arms that were attached to the radio extended beyond the radio far enough to allow the switch box to be attached in a similar manner.

As one can see from the accompanying photos the installation is quite neat and as my first experience with 3-D printing it opens a lot of options for amateur radio in the future. I can see 3-D printing being used for enclosures, for insulating materials and devices, for brackets to mount radios and accessories, the list just goes on and on. The only limitation is the imagination and the size of the printing platform in the printer. #-D printing with metal is on the horizon and just like with plastic the costs will come down as the technology expands. Within my lifetime I expect that hams will be 3-D printing not only the enclosure but the complete circuit inside the enclosure. The technology is in its infancy right now, in a few years I expect most of us will have a 3-D printer in our workshops just like we have an ink jet printer next to the computer in our radio room. 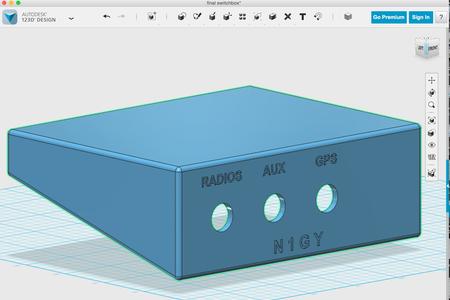 The three switches that are illuminated in this photo are, from left to right (or bottom to top if you prefer) RADIOS,  AUXILIARY, GPS. There is space for a fourth switch but I don't have any plans to add another switch at the moment.

Another screen shot showing the switch box right side up and with the labels for the switches and my call sign included in the 3-D printing process. 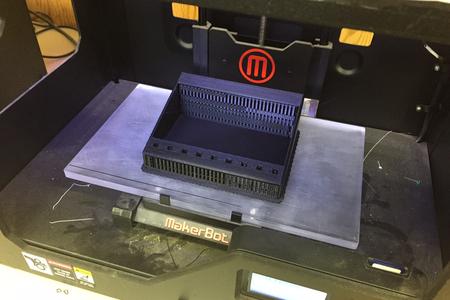 This is a screen shot of the electronic design we used to print the switch box for my mobile installation. In this view it is upside-down. 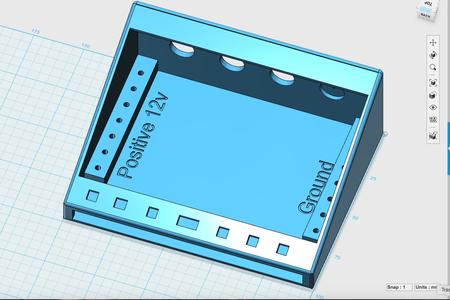 This photo shows the final placement of the switch box on top of the 220 radio. The main radio is an Icom IC-706MkIIG the control head is on a stalk mount out of the picture to the top. The CB set on the othjer side of the cup holders is only used on very long trips when it would be nice to find out why we have been in a parking lot on I-95 for the last hour. . 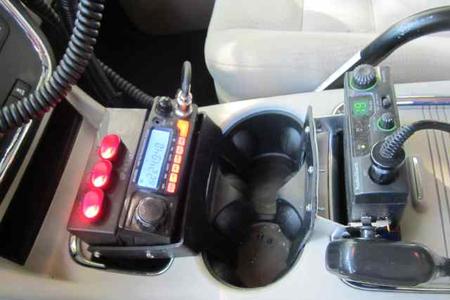