This little guy who is even smaller than the locomotive above is an industrial switch engine, popularly known as a "critter". They are usually found in the yards of large factories or mills and are usually owned by that company, not by the railroad that services the plant

This is one of two additions to the brass fleet. It is called a Steeplecab engine and is primarily used in yards of electric railroads or on interurban electric lines.

Finally, the sounder is repaired and the key and sounder are powered up and ready to display Morse Code communications as the railroads used this method for over 100 years. I am using a different key than the one pictured because it is more reliable, so far. 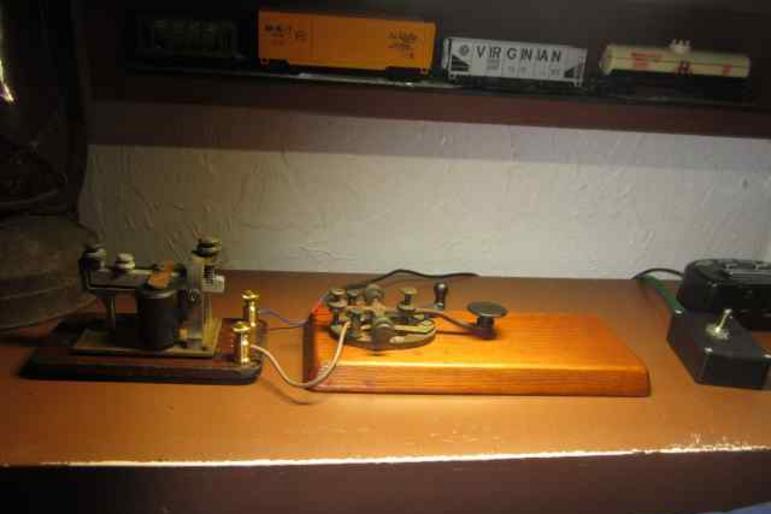 This is my latest aquisition. It does not run because the rearmost set of drivers has a problem with it's axle. But it makes a fine display piece and fills a gap between the all aboard sign and the picture my Dad did many many years ago. I have a feeling that my aquisitions will be slowing down as I am running out of space to display them.

I know I wrote that the Heisler above was the latest aquisition but in truth this little 0-4-0 was supposed to arrive before the Heisler. Unfortunately Fed Ex as usual stalled the delivery until today. The Hesler was actually early by several days thanks to the USPS doing their usually stellar job of delivery.

This is an updated photo of the collection of brass locomotives as it stands at the end of January 2022. I have added a couple of small locomotives, detailed above and it looks like there is room for two more. The overall  length of any future aquisitions is an important factor in obtaining them so this will be a long process. 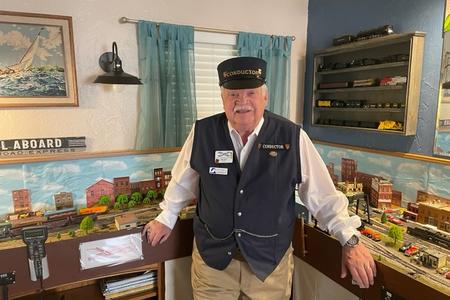 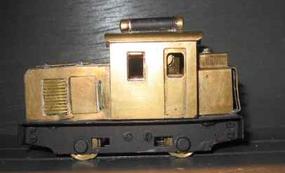 This is the latest aquisition, a Hesler geared locomotive made by Rivarossi for AHM. I wasn't too happy with the packing from the vendor but the loco made it through USPS without any damage. I am still waiting for Fed-Ex to show up, as usual a day late and a dollar short. Apparently my package from Trainz is in Orlando on it's belated way here. It is a very nice (if one can believe the photos) 0-4-0 in Brass. Including both of these new additions my locomotive roster is getting close to 50. I think that is where it will stop as I have virtually no room left to display any more.

This is my costume for my role as "The Conductor" at my local Model Railroad Club, "Real Rail" in Bradenton FL. I hand out a "ticket" to each child that comes in and then punch the ticket with an authentic RR ticket punch. If one of our members teaches the child to operate one of the trains on the layout (under Supervision of course) then the child also gets a Cerificate as a "Certified Junior Engineer". Just trying tomake their visit a little more memorable and hopefully instill a fondness for model railroading. In a first trial run last weekend, two children showed up, both were given tickets which were than punched using my authentic railroad ticket punch. Both kids went away with a souvenir of their visit and by all accounts were very happy with the souvenir of their visit. 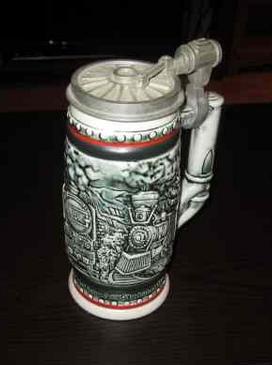 This is a recent purchase from the Model Railroad Club I belong to. It is an 0-6-0 swtcher made by Mantua. Oddly enough is is DCC equipped and uses a 8 pin jack to connect the tender to the loco. I have not tested it as yet but then I bought it to display, not necessarily to operate. My layout has kind of turned into a large diorama rather than an operational layout. Which I must admit is sort of OK with me as I am not really interested in operations, but more as a mini "museum" in my "man-cave". 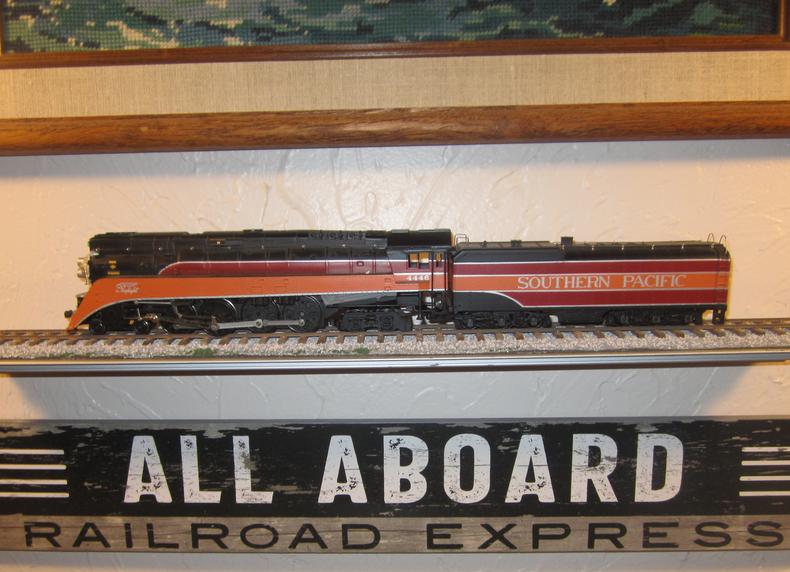 An update is due on my telegraph display. I have discovered the reason for the reliability problem I was having. It turns out that the Chromebook power "Brick" does not like being shorted out even for a nanosecond. Once I switched to a good old wall wart putting out 1/3 of the voltage of the " brick" everything worked fine. Power supply swapped, problem gone!

Below is an HO scale model of a Pennsylvania Railroad 2-10-4 locomotive.

Here is a shot of my newest aquisition, a telegraph sounder. The key in the background is one I have had for a number of years but it is exactly the type of key that was in use from the very early days of the railroads as soon as they began to use telegraphy to manage the movement of trains and information. The sounder is in pretty rough shape, but the coils are testing OK so it now remains to get the key and the sounder connected and powered up with a 12 volt wall wart, and place them on display in my micro-museum of railroad stuff. Believe it or not, I actually was able to disassemble the sounder and clean most of 100 years of crud off the parts. I did have to replace a few nuts and bolts and I have new parts coming for the binding posts on the right side of the sounder. I hope to make it a working display but if not then a static display will have to do.

Well, the parts arrived for the binding posts and turned out to be too small. I have ordered two complete old style binding posts from a source who specializes in those things and hopefully when they arrive I will be able to complete the display as a working example of telegraphy equipment.

A great Christmas present from my eldest Daughter and her family, A Pennsylvania GG-1 locomotive in HO scale.

Here is the latest aquisition for my collection. A real railroad oil can used by the engineer to oil the moving parts of his locomotive. This one came from the Baltimore and Ohio Railroad as is indicated by the embossing on the handle. It may be a little difficult to see because of the rust through on the handle but it is there. 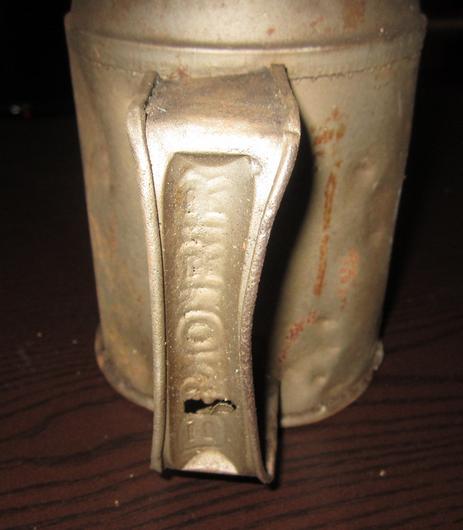 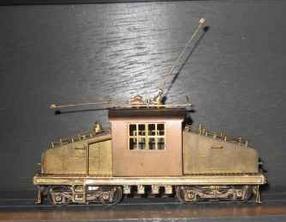 I picked this stein up at the Model RR club the other day. It fits in well with my other drinkware collectibles. It actually shows the history of steam locomotives through the years. 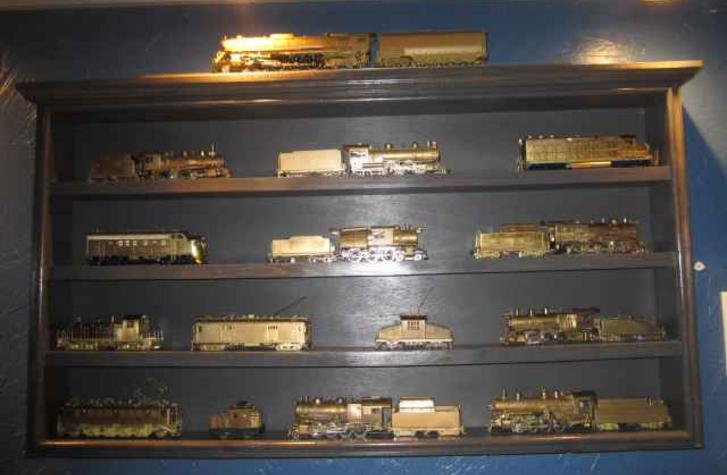 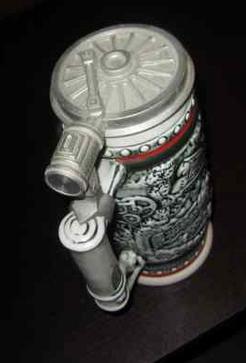 Here is the latest addition to my little mini museum of railroad artifacts. Before the age of computers, the railroad track crews had to keep track of when they had last replaced a tie, the big piece of wood underneath the rails. They did this by driving a"date nail" into the tie between the rails. To know when they had last replaced ties on a stretch of track all they had to do was look at the date nail which showed what year that tie had been put in originally. The dates on my little collection of nails ranges from 1930 to 1952. That makes my collection between 59 and 91 years old. Note that they are all still sturdy and capable of being driven in with a hammer.

The last few days have been busy. I have moved my collection of model rairoad magazines to two different locations which has freed up some shelf space. This has allowed me to move some items from their previous location to the newly available shelf space. My collection of railroad relics and memorabilia is now all in one place.