This is the new DC power control panel. The switch on the left of the panel selects either DC or DCC to power the track and also prevents both modes from being connected at the same time. The switch on the right turns the wall wart that powers the DC system on or off. The tethered throttle has an coil cord that reaches all the way from the south end of Phase 1 to the west end of Phase 2.and the north end of phase 3.

I picked this one up from the club store for less than $40  on Tuesday. It is DC only but since I have added that capability to the layout I will at least be able to see it run. When the railroads designed these they were called "Camelbacks" or sometimes "Mother Hubbards". THe crews hated them, the engineer was always hot and the fireman was always cold or wet or both. The idea was to make the firebox bigger by moving the cab out of the way but none of the designers gave a thought about the crews that had to run them.

Here is a shot of both the old display case on the right and the new display case on the left. Sorry about the poor picture quality, the display cases that Gabe built are truly wonderful. I have moved most of the stuff that was in the old one into the new one because the lighting is better over there although you can't tell from this picture. The case on the right is now reserved for my growing brass collection. I have already put my order in for at least two more to go over the staging tracks and possibly one more by the windows on the west wall. I have to report that I lost two models in the move to the new case. Both my fault, neither were locomotives. They were models of a snowplow and a Jordan Spreader neither of which were properly built by me, thus they are no great loss. I plan on replacing the Jordan Spreader with a RTR one from Walthers. I do not know about the snowplow yet. We will wait for the right model to come along. (Note to self- never try to load models into a display case using a picker-upper. It just doesn't work).

I have ordered replacements for the two destroyed models. THe Jordan Spreader is a RTR model from Walthers that is already assembled by the factory and also is colored bright yellow so it will show up very well in the new display case. The replacement for the snowplow is actually quite an improvement as it is a rotary plow with its own tender. For the time being it will reside in the brass display case as the other case is full once the spreader is added.

The replacements are on the way, I expect them sometime next week. After I take care of the deductible on my prescriptions I will be once again in the market for brass locomotives preferably of the unpainted kind. I have always been impressed with the jewelry-like quality of unpainted brass locomotives and that admiration extends to some of the models of electric locos and interurbans. One of these days I will have a nice collection of such models. I am off to a good start I think. I am not interested in the super expensive models, I look for the bargains that are out there. I am not a rich man so bargains and good values are my targets.

The Cab Forward has been moved to it's final position on top of the display case. It is too big to go around the 18" curves on my layout but it makes a great display piece. As you can see from the picture at the left that display case is now full to the brim. The other display case has only brass locos in it now and the next few months will be devoted to filling it up as well. Isn't progress just wonderful? 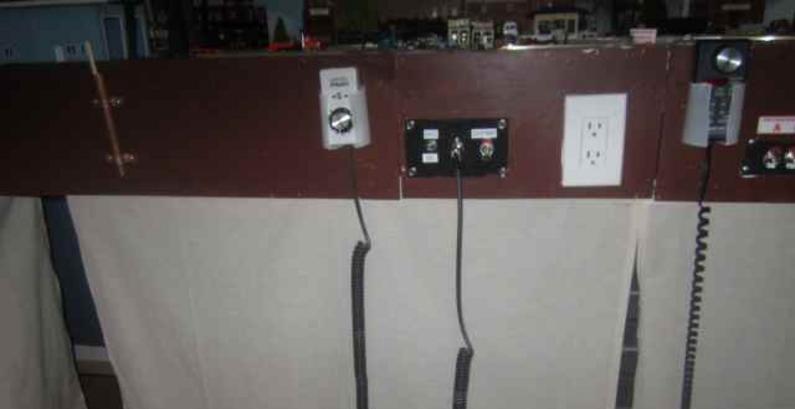 This is the newest aquisition, a rotary snowplow, which is actually powered. I have not tried it out yet as I have a lot of track cleaning to do first. Arriving Monday (I hope) will be a Jordasn Spreader to replace the one I accidentally destroyed a few days ago. It was not much of a loss, as I had done a terrible job building it from a kit. This ready to run model will be much better in every way including the fact that it is factory painted in bright yellow.

I am currently awaiting delivery of a PWM DC tethered throttle which I plan to add to my layout. It's purpose is to allow me to run DC equpped locomotives on at least part of the layout. The DC throttle will connect to the track via a double pole double throw center off switch. THe other side of the switch will feed the DCC system already in use to the track. Since all of my locomotives are stored on either sidings where power of either sort can be shut off or on display only shelving which has no power at all. this will allow operation of the DC locos without any risk to the DCC equipped engines. The throttle is made by a gentleman in St. Catherines Ontario, Canada and is quite inexpensive. The revues of this throttle are uniformly great. I have made a panel which contains the switch that I mentioned before along with a switch to turn the power off to the transformer that feeds 16 volt AC to the throttle and a 4 pin mic connector like one might find on an old CB set. This has 4 pins that will fed both AC power to the throttle and DC power out to the track. All of this is ready for the throttle to arrive if and when Customs decides to send it to me. The maker shipped it last week so it probably will not get here for another few days.

The throttle arrived today in fine shape and the appropriate connector has been added to the cable. I have tested it using a DC only loco and all works like it should. I am going to have to get help to install it on the layout but that hould not be a major problem To celebrate, I purchased another brass locomotive, this time a model of a Pennsylvania electric loco. THe price was good and the dealer I have dealt with before. I know I said no more locos until after Christmas but this was just too good a deal to pass up.

This loco arrived via Fedex today. It is a model of a Pernnsylvania Railroad L-6 electric loco. The pantographs (those things on the top) actually work and if I were to ever add working catenary wires above the tracks on my layout it would actually take power just like the real thing. At the moment however, it is fated to be a shelf queen like the rest of the brass locos in my fleet. 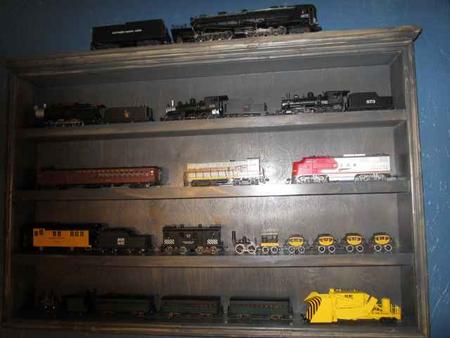 In a somewhat surprising turn of events, the post office delivered my Jordan Spreader on a Sunday. This particular unit is not lettered for any particular road so if I ever get decals made for the Atlantic and Great Lakes Railroasd System this is probably one of the places they will be applied to. 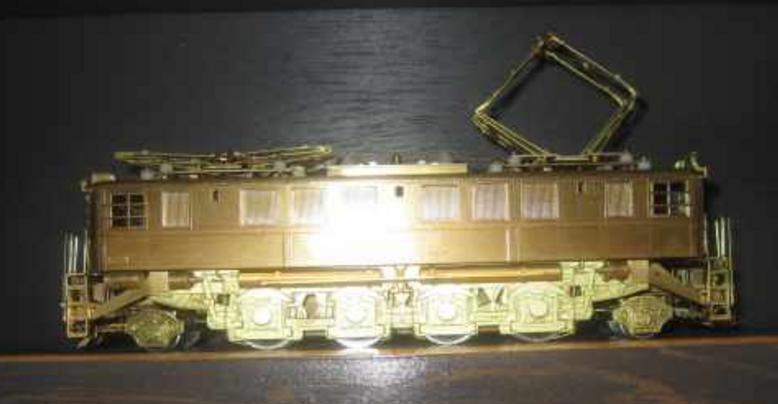