Here is a photo of the completed antenna. Note the use of a 4 or 5 turn common mode choke at the base of the antenna 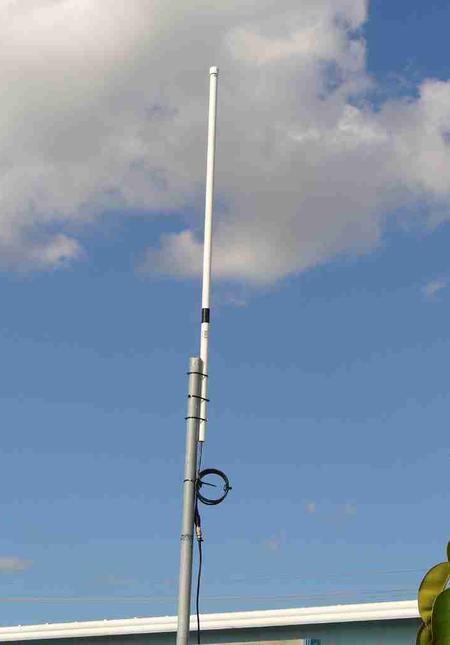 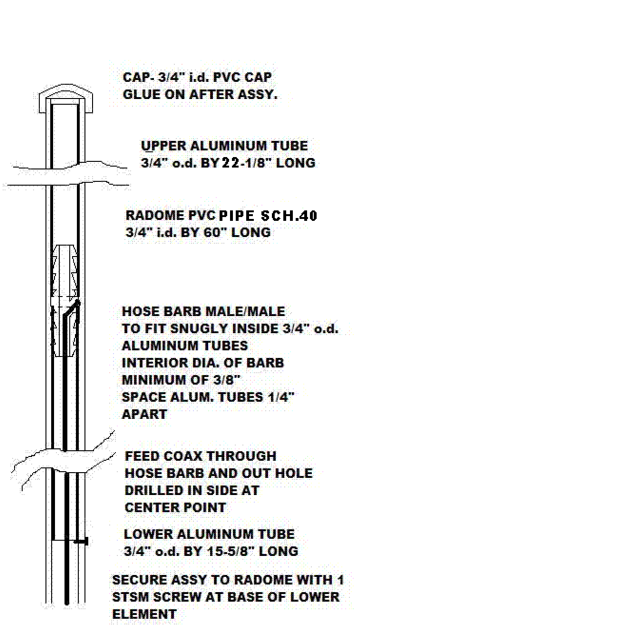 The new version of The OCF Sleeve Dipole

This project is the latest in an ongoing series of antenna projects all using the same basic design. The original design was by Harold Melton, KV5R from the Athens (Texas) Amateur Radio Club. I found it on the club's website (www.athensarc.org/sleevedipole.htm).  My first attempt at building this antenna for myself was a complete success! It worked just as Harold said it would. The performance on both 2 meters and 70 centimeters was excellent and the cost was almost free.

I did add a couple of details like a ground spike so I could mount it just by planting it firmly in the dirt. This antenna, made of aluminum duct tape (the shiny metal tape, not the grey cloth stuff) applied to a 7 or 8 foot chunk of 1/2" schedule 40 PVC pipe is part of my go-kit for ARES. I also built it with a take-apart connector just below the antenna elements so it will fit in my car easily.

Encouraged by this success, I started to wonder what else could be done with this design. I had some 3/4" aluminum tubing (otherwise known as old tent poles) laying around the shop, so I decided to perform a little experiment.

I cut two pieces of the tubing to the dimensions listed in Harold's article and assembled them to the coax with a short piece of PVC to space them the proper 1/4" apart. The coax was terminated in soldered ring terminals and self-tapping sheet metal screws connected the shield and center conductor to the appropriate elements as well as securing the elements to the PVC spacer. The coax as before comes up through the lower element and exits through a hole in the PVC to be secured with the sheet metal screws. See Antenna # 1 on the Navigation Bar.

This antenna was then secured to another piece of 3/4" PVC as a short mast extension to place the antenna elements above the metal mast I planned on securing it to. This antenna, cut to exactly the same measurements as the tape version, also worked as well, with an acceptable VSWR on both bands . This antenna, I erected on a 15 foot conduit mast at the back of my home and it is still in use as my primary dual band antenna. The only problem is esthetic, because with the changes in diameter from the aluminum tube to the PVC and so on, it looks a little ragged to me.

I decided to take the design one more step and see if I could come up with a neat and clean looking antenna. Once again, the same measurements were used for the 3/4" aluminum tube elements as in KV5R's original article. 22 and 1/8" for the upper element, 15 and 5/8" for the lower element, and a 1/4" gap between the two. I realized that the 3/4" aluminum tubing uses that number as it's outside diameter, and that 3/4" PVC pipe quotes an inside diameter. Sure enough, the aluminum tubing slides neatly into the PVC with just a little slop.

If I could find a plastic spacer/connector to control the 1/4" spacing, it might work. The local home improvement store came to the rescue with a 5/8" "hose barb". Well, almost. The center of the barb has a collar around it that was a problem, but I solved that by sanding it off with my belt sander. With a hole drilled through the side of the barb I ran the coax up through the lower element, and out through the hole in the side of the hose barb. After dressing the end of the coax to create a shield lead and a center conductor lead, the coax was pulled back until the leads were level with the side of the barb. The leads were then secured to the aluminum elements using adhesive foil of the type used in assembling stained glass projects. I then assembled a UHF connector on the other end of the coax and tested the antenna for short circuits. Finding none I proceeded to create the PVC "radome". I measured the total length of the antenna assembly as 38". I measured down from the top of the PVC pipe that same 38" and inserted a single short screw through the side to serve as a stop. The coax and antenna assembly was then threaded down the PVC pipe from the top until the lower element hit the stop screw. At this point the UHF connector and coax extended well past the bottom end of the radome. A PVC end cap weatherproofed the top end of the pipe, and since the PVC pipe I used was about 5 feet long, there was plenty of empty PVC pipe below the antenna elements to permit securing it to any kind of mast, metal or otherwise. I took the precaution of making the outside of the PVC radome to indicate where the lower antenna element ends, so that securing it with metal hose clamps or U-bolts would not be a matter of guesswork.

Another session with the VSWR meter proved that that excellent VSWR was still present on both 2 meters and 70 centimeters. This antenna is really broad-banded, A session with an MFJ-269 Antenna Analyzer showed an accepable SWR from 140MHz to 174 MHz and from 421 MHz to 469 MHz..  It certainly performs as well as the commercial dual band J-Pole it replaced, and with a better VSWR on 70 centimeters as well.

Esthetically, the antenna is a complete success. It has all the appearance of one of those fancy fiberglass radome base station or repeater antennas at a cost of less than $20. The choice of mounting clamps is up to the builder, anything from U-bolts to big wire ties will work. Mileage may vary on the choice of course.

On the RF side, I think we have success also. Pending the results of more precise analysis, the anecdotal reports are good. All of the different versions of the antenna have good VSWR, my results at my location have been verified by another builder who used 1/2" copper tubing for his version. He is able to get into a repeater full quieting from about 50 miles away using only 10 watts and his antenna is mounted inside his attic due to CC&R restrictions. The antenna is sleek and easy to construct. With all the materials at hand and appropriate hand and power tools such as a belt or disc sander, I estimate it will take less than two hours to complete the latest version, probably less for the earlier ones. You will note from the photographs that I used a 4-5 turn common mode choke at the base of both antennas. Although I had no problems with RF getting back into the radios, after discussions with the editors at QST, I decided to install the choke as a precautionary measure. The choke had no effect on the SWR of either antenna.

This series of antennas was published in QST in the August 2006 issue. Note: there was a typo in the article. The correct length for the upper element is 22 1/8" as stated on this page.