This photo shows where I mounted the control head for the FT-90R. What it does not show is how. Because the original mounting bracket was missing, I fabricated a replacement out of 3/4" aluminum angle. Two small holes were drilled in the angle to accomodate screws that mounted the control head to the angle and two larger holes were drilled to mount the angle to the scooter. The connecting cable from the YSK-90 remoting kit was fed inside the front of the steering mechanism and exited at the tilt mechanism. You can just see the cable on the left side of the "tiller" where the round parts are at the base of the "tiller". From there it is hidden under the rubber mat until it disappears into the scooter battery compartment. This is also where the excess cable is stored. From the battery compartment it is a very short run to the main body of the radio which is mounted on part of the frame for the right side arm rest. The rest of the armrest was discarded long ago.

Today I attempted to find a copy of the "Nifty Mini-Manual" for the FT-90R. I failed completely.Even the home site for the "Nifty Mini Manuals" says that that manual is no longer available. So I did the next best thing, I made my own. I am pretty sure these instructions will work OK but I make no assurance that they are totally correct. Your mileage may vary.

Turn Main Dial to select the appropriate tone frequency.
Press and hold the VFO/MR switch on the mic for 1 second.
Then use up /down  buttons to select memory location if needed. Press the VFO/MR button again momentarily to store settings into that memory channel.
Memory Recall:
If in VFO mode, momentarily press VFO/MR button to select Memory.
Use MAIN DIAL knob or the UP/DOWN switches to select the appropriate Memory Channel 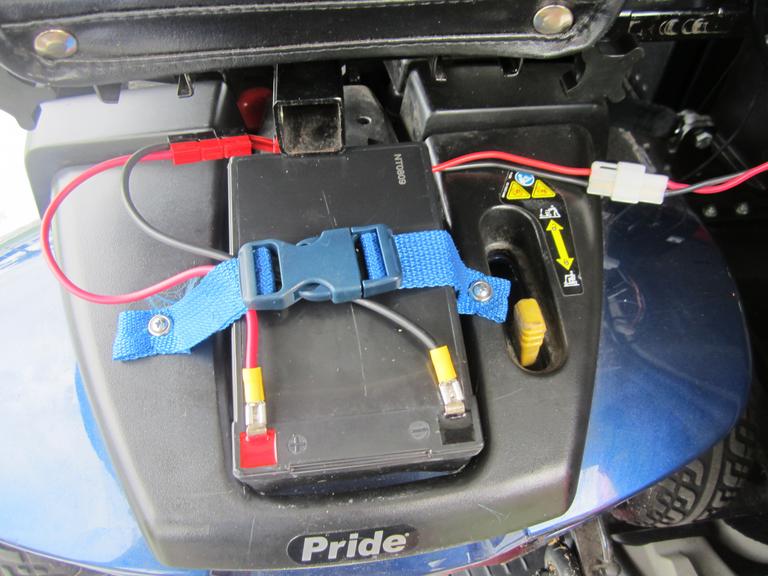 If you have been perusing this site for a while, you have no doubt noticed that The page on the Jetstream JT-270M radio has sort of turned into a story about mounting that radio on my mobility scooter. I decided that, in view of some major changes, that it was time for a new page about mounting a radio on a scooter. One of the reasons for this was the fact that the radio itself has changed from the JT-270M to a Yaesu FT-90R. The old rig was getting a bit long in the tooth and sometimes would get fussy about whether it would turn on or not. Hence the new install. 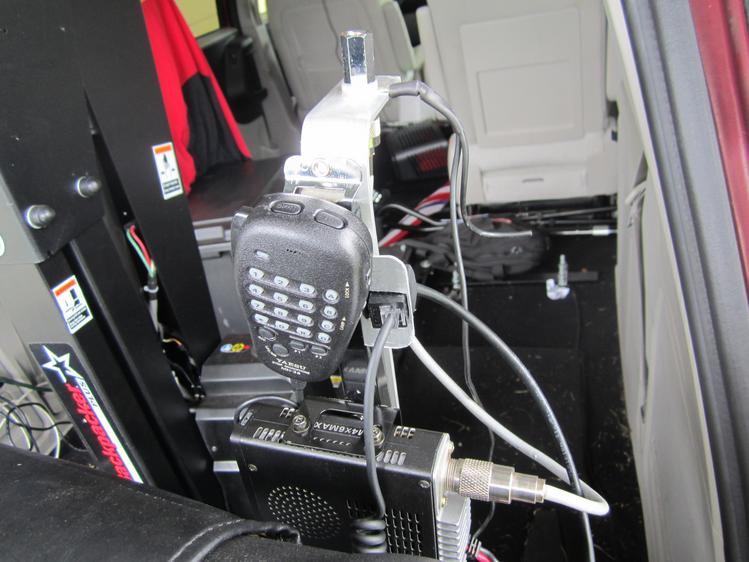 Today was the first day I could take the scooter out for a test ride. Of course the radio refused to cooperate, mainly because the battery voltage had dropped again into the high 8 s instead of the 13.8 volts it should have had. Luckily, I had just taken delivery of a brand new 12 volt12 AH SLA battery so a quick swap took care of the low voltage. I did make sure that the new battery was fully charged. The second problem reared its ugly head when I was actually riding on the scooter. When I first installed the control head, the scooter was elevated on my lift and thus the control head was just about at eye level. Once I was seated on the scooter I discovered that the display of the control head was aimed somewhere around my navel. I removed the control head and flattened out the angle aluminum mount so the display would be aimed at my eyes instead. One of the interesting things about doing such work in the back of a mini-van is that the very small machine screws involved can disappear without a trace into the bowels of the van, never to be found, ever. Just a reminder, whenever you have to do work with very small hardware, try to do it indoors in a well lighted room. Otherwise I guarantee you will not only lose screws or nuts but they will be the very ones that you have no spares of. Obviously,the hardware store that might have said spares closed an hour before you began work on this latest project.

I also decided to move the mic holder from the vertical brace to the steering quadrant of the scooter. A trip to my local hardware store netted a 3/4" conduit clamp and my well stocked junque box yielded a small piece of aluminum strapping about 3/4" x 2" x 1/8". THe aluminum was drilled to accept the conduit clamp and the mic clip and the whole enchilada was clamped around the steering quadrant outboard of where my hands grasp the quadrant. Pictures will be added as I get time. 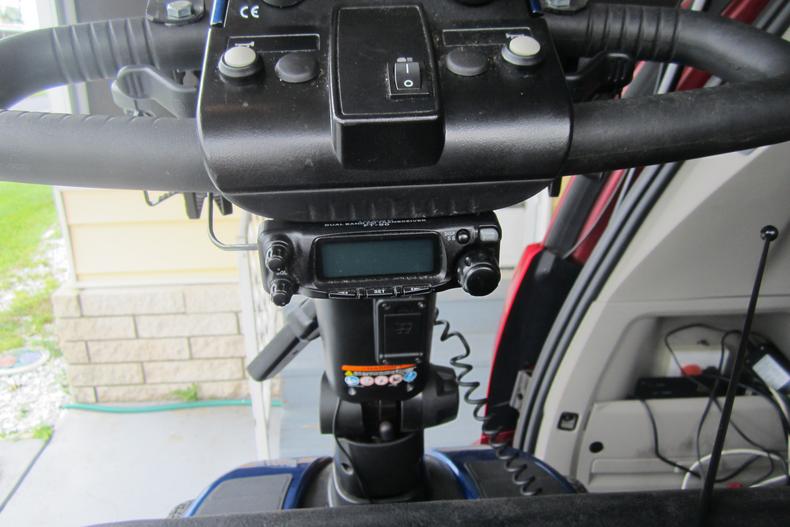 This is a shot of the major portion of the installation. On the vertical portion of what used to be an armrest I mounted the main body of the radio with the speaker facing the rider. This required a short extension of the microphone connector (the black cable that comes from bottom right up to an aluminum angle that has been fabricated to mount an RJ-12 female jack that the mic plugs into. THis extention was subsequently removed when it was found that the standard mic coil cord was plenty long enough to be usable. The mic is stored on a mic hanger that is bolted to the top of the vertical portion of the ex-armrest. Opposite that and bolted to the same vertical is another aluminum strap 1/8" x 3/4" which has been drilled and bent to carry an antenna stud mount which is connected to the main body of the radio by a short RG-8X coax jumper. The stud mount has had "Tiger Tails" added to it to provide a counterpoise on both 2 meters and 70 centimeters for the dual band radiating element which is not shown here because it has to be removed to store the scooter in the back of my van. I store the radiating element in the pouch on the back of the seat. It only takes a moment to screw the radiating element into the mount when I unload the scooter. Once I had everything mounted on the scooter, I realized that the original antenna mount was kind of risky to anyone around me. Sharp edged aluminum is not something one wants to make contact with by accident. It was a bit of a thrash but I turned a new antenna mount so that it was mounted on the back surface of the square tubing that everything is attached to so that the antennamount is  tucked in rather than sticking out ready to catch the unwary by surprise. Much Safer!. I will post a new photo when I get time.

This photo shows the power source for the radio. A 12 volt, 12 Ampere Hour battery fits neatly into a well at the back of the scooter where it is strapped down with 3/4" webbing and a quick release buckle. From here it is a very short run to the radio. I chose not to power the radio from the scooter batteries because the scooter operates on 24 volts DC and adding the draw from the radio to either of the two 12 volt batteries would cause a major imbalance for the scooter power source.  This photo was taken before suitable shielding of the terminals on the battery was installed. There is no danger to anyone from the 12 AH battery..

Because the antenna is relatively close to the operator and because the FT-90R has a reputation for getting quite hot during full power operation, the output power was programmed to be at Mid level or 10 watts output on all of the 28 frequencies stored in memory.  I may increse the power on some repeater frequencies that are further away from my general location. It remains to be seen what repeaters those are.

Subsequent testing revealed the radio made solid contact with all of the area 2 meter and 70 centimeter repeaters in the area ay only 10 watts output power, which was expected since a 5 watt HT can usually do the same. The extra wattage just makes the contact more solid and more readable.