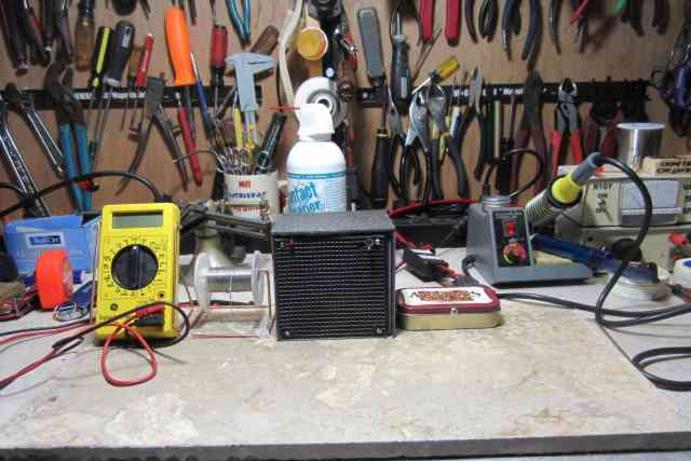 ​The New Soldering Station at N1GY

To the right is a shot of the back of the DVM to better show the stand I made for it to keep it upright and easier to read. Again the stand was bent up using the same welding rod as above.

The picture above shows the overall view of the new solder station. The soldering iron is to the right behind the tile.

To the left is a photo of the solder rack which was bent up using 3/32" welding rod. I tested it with a full reel of the solder I use and it had no problems. It is affixed to the tile with hot glue so I can pull the solder off without dragging the holder along as well. 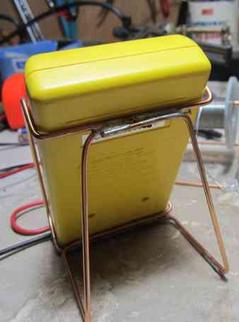 A few weeks ago, I made the mistake of using a small hand blowtorch to do some soldering on 3/32" welding rod. The problem was that I did not have a soldering gun big enough to handle large material. It would eventually do the job but it was not a pleasant or easy experience. However, when I used the torch, which handled the soldering quite easily, I also unfortunately charred the plastic laminate that my work bench is covered in.

A stopgap solution was to use a small piece of ceramic tile that was stored behind my shed. It covered the charring and did not suffer the same effect when I was soldering. After a few weeks I wanted to clean up the bench because the chunk of ceramic tile was very irregular in shape and everything else, the fume extractor, the solder, etc. was off the tile and it was getting a bit crowded on the bench.

The solution was to begin anew and design a proper soldering station. I chose a larger rectangular piece of ceramic tile and mounted the fume extractor on at the back. Using some 3/32" welding rod, which by the way, is actually copper clad steel, I built a holder that carries a full reel of solder. The holder was hot-glued to the tile. The fume extractor is heavy enough that it's weight alone will keep it in place. Using the same welding rod, I constructed a stand that keeps one of my DVM's semi upright so it is easier to read. On the other side of the extractor I placed and hot-glued an Altoids tin that I cut a hole in the lid and filled with a copper kitchen scrubber. We used to call them "Kurly Kates" but I fear that brand name may be gone forever. It does a bang up job of cleaning the tip of the soldering iron. I thought about mounting the temperature controlled soldering iron right on the tile but decided the tile would get a bit crowded if I did. I did rearrange some items on the bench top to place the iron and it's controller a bit closer to the tile. Below are the photos that I took of the new set up.

On the left is a photo of the tip cleaner I built. Altoids tins are useful for many things in ham radio. Everything from a continuity tester to a complete QRP radio has been built into these ubiquitous containers. In this case a "Kurly Kate" has been stuffed into the tin after an opening was cut into the top. Performs magnificently when cleaning the tip of the soldering iron. 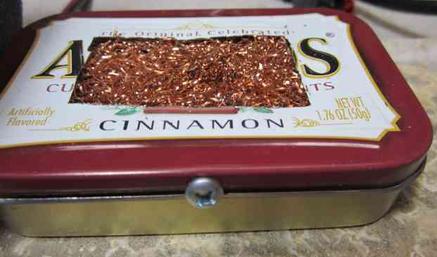 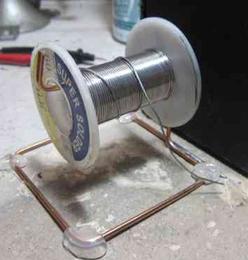