This is an extreme close up of the working end of the tool. The shaft only protrudes enough to enter the jack just far enough to position the two tips to engage the ring nut of the jack. Positioned this way, there is no possibility of the tool slipping off the nut and or damaging the surface of the panel in which the jack is being mounted.. 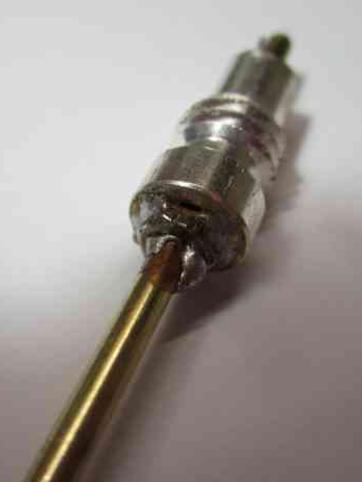 This evening, I took another look at the new tool and decided that the handle, while functional was not how I wanted to leave it. I took another look around the shop and found a handle from one of those mini screwdriver sets that discount stores sell. I made a few modifications to the handle removing a long dead battery and the associated lamp and wiring. I actually had to drive the battery out with a hammer and nut driver as a prod. Once the battery was clear and the handle cleaned out the end of the headset jack nut driver (its new name) fit snugly inside the handle. The remainder of the space in the handle was filled with hot glue because I did not have any epoxy on hand. This tool does not have to stand too much torque so the hot glue should be fine. The tool now looks almost of commercial caliber (at least in my opinion). Of course I am a bit biased having constructed it in the first place.

The overall picture of the finished tool. The handle is a bit crude and my soldering could be better, but the tool works and that is all I asked it to do. 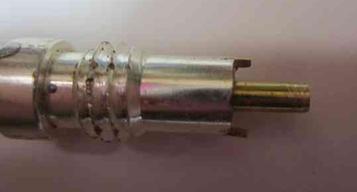 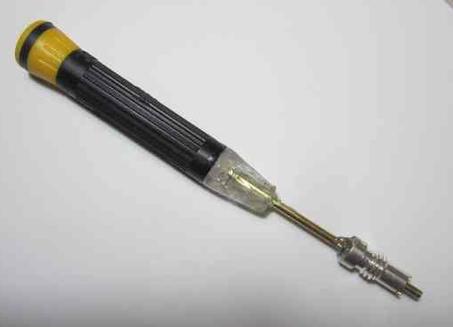 Ever since I began building ham radio projects, I have been looking for a tool that would allow me to tighten and secure the 3.5mm stereo and mono audio jacks that are part of so many projects in amateur radio. I spent way too much money having a pair of modular screwdriver tips modified by a commercial machine shop to fit the two little slots that are cut into the "ring" style nut that is found on most of the audio jacks today. The modified tips never worked really well, in part because the space between the small tips was too wide to properly position the tool. When I saw a picture of a tool made by a gentleman in Japan which only one small shop in the electronics district sold for him, I had to at least try to duplicate it. It turns out that the gentleman who used to make them retired many years ago and the tools have not been available for many years. So, on to the build:

I decided to begin with the 3.5mm or 1/8" shaft as this would not only position the tool around the jack but also form the shaft and part of the handle for the tool. I drilled out two small hexagonal nuts to fit onto the brass rod which I got at a local hobby shop. The first of these nuts was placed in a vice and the corners of the nut were filed down to permit it to slip inside a UG-176 coax adapter. The adapter usually goes inside a PL-259 to permit the PL-259 to be used with RG-8X coaxial cable. However, it also matches almost exactly the diameter of the "ring" nut of a 3.5mm or 1/8" audio jack. While I was at the hobby shop I also purchased a small ZONA razor saw, so I used that to cut away material from the end of the UG-176 so as to create the two small tips or pins that engage the slots in the "ring" nut. All of this cutting and shaping was done with the saw and small files until I was satisfied with the size and shape of the projecting tips.

Next it was time for assembly. The shaft with the modified nut was slipped into the UG-176 and positioned so that the shaft projected just the right length beyond the tips. I wanted the shaft to position the tool on the jack but not go into the jack so far that it might damage the internal connections of the jack itself. The modified nut was positioned suitably and then a butane powered hand torch was applied to heat the assembly and solder was applied to the inside of the UG-176 to secure the nut inside it. The unit was allowed to cool and then inverted and the second (less modified) nut was slid down the shaft to rest on the back end of the adapter. It was also soldered to the adaptor and the shaft. With the working end of the tool completed, I turned my attention to the handle end of the shaft. First it was cut down to a suitable length of about 5" overall. I spent about an hour testing various ideas for an operating handle and eventually decided to build one using the left over piece of 1/8" brass rod. I cut six pieces about 1 1/2" long and wrapped them around the handle end of the tool. I used wire ties to hold them initially and then augmented those with enameled copper wire. The wire ties were then removed and using my 140 watt soldering gun I soldered all six pieces of rod to the central shaft. A couple of vacuum caps from the auto parts store (actually from my junque box) were pressed into service as a hand friendly cover over the assemblage of brass rod and the job was done.

I built the tool in this manner because trying to modify say a nut driver or my previous attempts would mean attempting to drill through hardened tool steel (never an easy task). The end result is a tool that, while quite crude and obviously home made, does the task it was built for in fine fashion. Below are some photos of the tool.

Having received permission from the original author, Alan Kastner, here is a photo of the tool that started this entire project. Since I do not have the tools nor skills to duplicate this marvelous tool, I resorted to the ham radio operator's special skill set: building it out of what I had on hand.

The soldering job is a bit sloppy but the view is of the second hex nut soldered to the back end of the UG-176. The second nut together with the one inside the adapter serves to properly orient the shaft concentric to the modified UG-176. It was a very happy coincidence that the diameter of the inner end of the UG-176 just happened to be the same as the diameter of the ring nut on the 1/8" audio jack.

I can only hope that some tool making  company will someday make a commercial version of this tool. In the meantime I will use the home brewed version to its fullest. I have emailed the owner of the web site where I found a picture of the original tool in hopes that he will permit me to add the photo to this page. For now I wish you , as usual 73 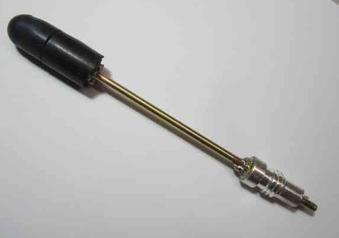