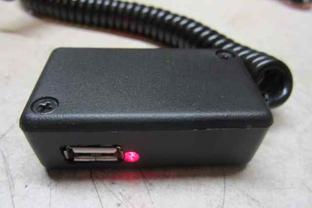 Two views of the auxiliary USB ports. They are powered up as you can tell from the lighted LEDs beside each jack The LEDs were already mounted on the circuit boards, no extra wiring needed. 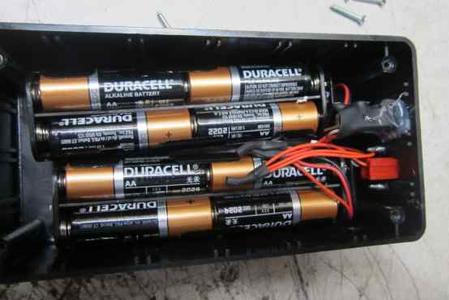 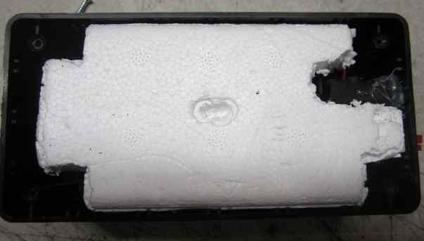 The foam block of polystyrene came from some forgotten packing around some forgotten device but it does the job of steadying the battery.holders just fine

This view is of the top of the battery box showing the USB jack, the on/off switch and the Powerpole connector.

The USB connector appears to be coming the most common connector since the development of speech. One uses a USB connector to upload and download data from a PC or Mac to and from ones cell phone, tablet external hard drive, flash drive, etc, etc. One also uses that same USB connection to charge the battery in said cell phone, tablet etc. One of the problems with all of these devices is that they seem to run out of battery power just when they are most needed. They never go black on an ordinary day, only after a car accident or trying to report a fire or some other disaster, large or small. The market place has come up with various solutions to this problem and all of them cost money usually more than I want to spend.

My solution was to re-purpose n auxiliary battery pack I built some years ago to power an HT whose internal battery had gone belly up. For that matter so had the memory for frequencies. That part was OK since I was going to use this HT only as a receiver for RDF or Fox hunting. I eventually ditched that HT so the battery pack went into long term storage (otherwise sometimes known as the "Junque drawer".

My first task was to add an ON/OFF switch to the enclosure and to install a Powerpole connector set into the top end of the enclosure rather than the coil cord it had previously. I also wanted to add one or more USB charger connections since even a dinosaur like me has a use for a USB charger. In doing a bit of research as to the costs involved it was quite apparent that the usual electronic outlets like Best Buy (not), Office Depot and the like were priced way higher than my wallet chose to fly. I thus stopped in at one of our local super discount stores (Dollar Tree) where I found that for $1 each I could buy as many USB chargers as I wanted. The only problem was that they were encased in a cigar lighter type plug, meant to plug into an automotive power port in the dash. I bought 3 right away along with a new USB to micro USB cable (also $1)

Once I got my purchases home I discovered that the USB chargers were very easy to disassemble. Take the little Phillips screw out of the face plate that surrounds the USB jack and then unscrew the tip of the plug at the other end. The plug almost falls apart by itself. What is left is a small circuit board with a metal clip clipped over the outer housing of the USB jack (ground) and a small metal u-shaped fitting at the other end that is contacted by the tip of the plug (12 VDC+). ONce the clip and the other parts of the plug were removed it was no problem to solder hook-up wires to the solder points of both ground and !2 VDC+. No modification of the circuit board was necessary. Because I was going to use hot glue to anchor the charger unit into the enclosure, I put a short length of 3/4" heat shrink tubing over the jack and the attached circuit board and shrunk it into place. Having made an appropriately shaped and sized hole through the wall of the enclosure, I then inserted the charger "module" and applied hot glue on 3 sides to secure it in place.

The wiring was pretty straightforward. The two battery holders, each of which holds eight AA cells and uses a battery clip usually reserved for 9 volt batteries to connect to the wiring plan were connected in parallel. The + side of the pair was routed to the on/off switch. From the switch the + side wiring went to both the USB jack and to the Powerpole Connector set also installed in that end of the enclosure. The negative side wires were all soldered together from the batteries and the USB jack and the Powerpole set.

I mentioned a while ago that I bought three of the USB chargers. So far I have only used one. The other two, stripped of the cigar lighter plug and with hook up wires soldered in place were installed in a small plastic enclosure, side by side but facing in opposite directions. They were wired in parallel to the coil cord from the old set up. This extra capability can be plugged into the Powerpole connector on the enclosure giving a total of three USB ports. I have no real data on how long the AA cells will last under various loads but since it is intended to be a very temporary way of powering a cell phone when the internal battery of the phone dies, I doubt that the service life of the AA cells will be a problem. One could, of course, substitute rechargeable batteries for the non-rechargeable ones I currently use. My thinking was that the shelf life of the non-rechargeable batteries is much longer that the charge retention of the rechargeable batteries, and since this unit is likely to sit unused until the few times it is truly needed, I went with my choice.

As in it's previous incarnation the two battery holders fit neatly into the enclosure and a small slab of polystyrene foam was re-used to keep the battery holders from moving about. Also as before I retained the metal belt clip on the outside of the enclosure lid. The lid is held on by four screws. I have carried this device on my belt many times in the past on Fox hunts etc, and never had a problem. I also was able to do some testing after the project was assembled and it does indeed power and charge my Android smart phone. I still cannot get used to a phone that is smarter than I am.

In comparing this project to the commercially available charger/emergency power devices available at the stores I mentioned at the start of this page, two facts come immediately to mind. The commercial units are very smart, quite small and somewhat expensive. My home brewed version is larger, has more USB ports, and cost me $3. I rest my case!

A look at the inside of the box. The batteries are secured in two 8-cell battery holders wired in parallel. The USB jack is on the upper right next to the red Powerpole connector. The switch is behind the USB jack.

This last photo shows the interior of the small plastic enclosure in the pictures immediately above this one. The two USB charger boards fit perfectly once the openings were made in the sides of the box. No glue was needed to secure them since the other end of the circuit board is right against the wall of the box in both cases. The two USB jacks were simply wired in parallel to the wires from the coil cord which was secured to the box with two small wire ties or zip ties.

Portable Power for USB And Other Devices

Here is the belt clip attached to the lid of the enclosure It is secured by a bolt at the bottom of the clip and a strong wire tie at the top through holes in the lid. There are other ways to do this but for me it was quick and relatively easy to do it this way. 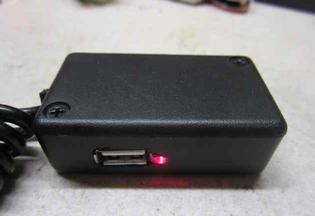 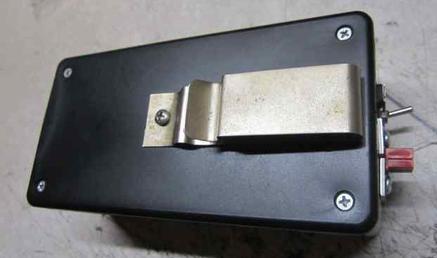