This is the latest version of the tester. I am now using a single LED that lights red with the polarity in one direction and green with nthe polarity in the other direction. So the part count is now two plus the PowerPole pair, one bicolor LED and one 1K resistor. I fill the spaces at the back of the PowerPole connector with hot glue to prevent anything from shorting out the tester including prying fingers. 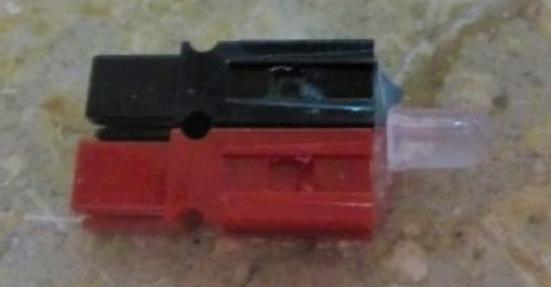 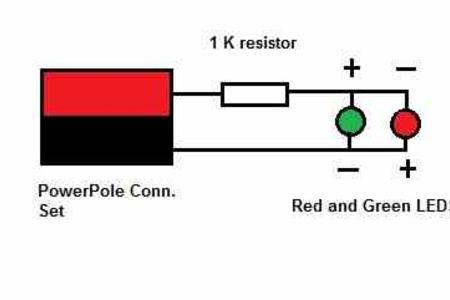 This little gadget was found in an article in QST. It looked easy and it was.

This little polarity tester is meant to be tossed in your "Go-Kit" for the times you might get deployed by your local ARES unit to an unfamiliar site. Sometimes operators either choose not to follow the "Power-Pole" standard or just make a mistake during assembly. The polarity tester allows you to plug the tester into any "Power-Pole" equipped power source and instantly know if it is wired properly.
The parts list is very short:
1 pair of powerpole connectors (one red, one black plus the 2 contacts).
1 resistor (1/4 watt 1000 ohms).
1 red LED
1 green LED
1 short (about 2") of hookup wire.
some small diameter heat shrink tubing to insulate the LED leads.
The circuit is shown below. Building the device starts with soldering the 1K resistor to one of the powerpole contacts. Insulate the positive lead of the green LED and the negative lead of the red LED and solder both to the open lead of the resistor. Solder the length of hook-up wire to the other powerpole contact. Install the contacts into the powerpole housings. The contact with the resistor soldered to it goes into the red housing and the contact with the hookup wire goes into the black housing. Now position the LEDs close to the back of the powerpole housings and solder the open leads of the LED's to the hookup wire. Trim off excess wire and component leads and insulate the whole rear end of the powerpole connectors with hot glue or epoxy. Keep the LEDs clear of the insulating material so you can still see them. See the photos for a clear view of what I mean.You arre done.
To test the unit, plug it into the powerpole connector from a power source. If the source is wired correctly the green LED will glow. If not, the red LED will light up. It really is that easy. Green is GOOD, Red is BAD. 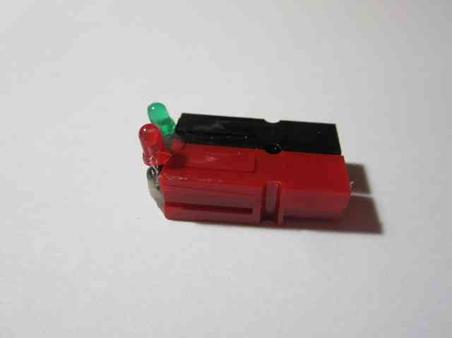