This picture clearly shows where the track was removed along with the turnout that served it. The unballasted section of track at the top will be re-ballasted and ground cover and trees will be placed to cover the bare plywood which is visible. The mounting base for the ground throw that operated the turnout had to be left in place as I could not get it to come up. It will get a coating of ground foam ground cover to hide it's presence. Additional Comment: I couldn't let it wait, the ballast and ground cover has been installed. When the scenic cement dries I will take another picture so you can see how it turned out. 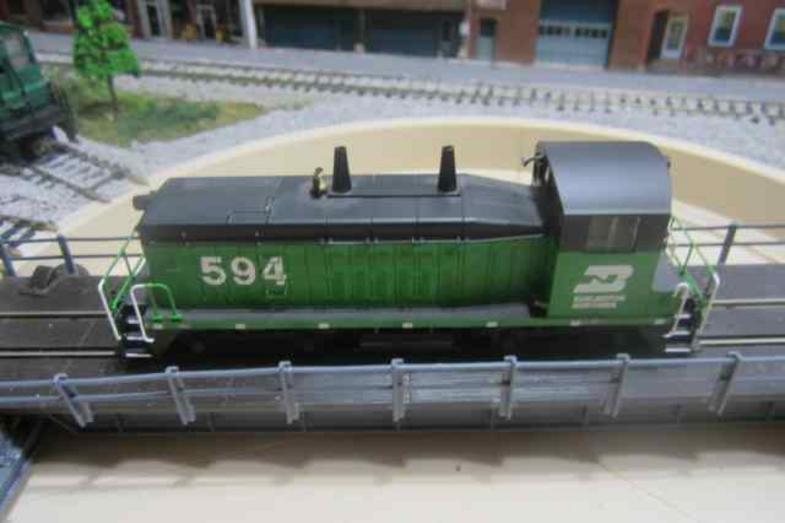 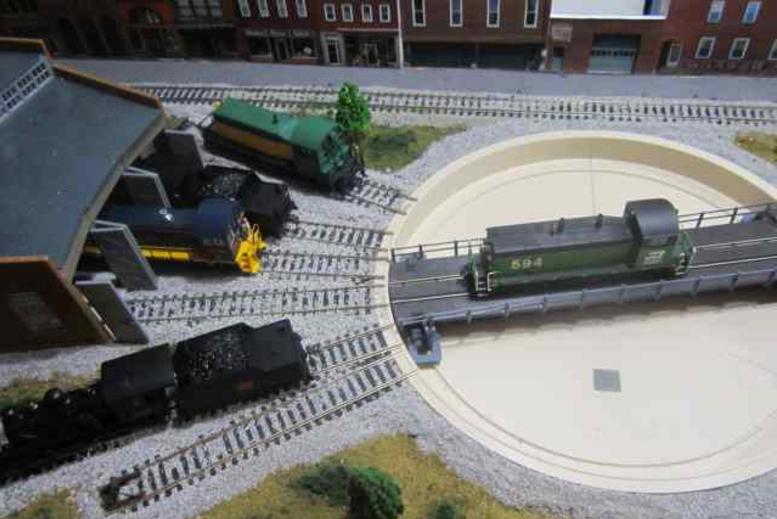 This is the latest building on the layout. When I mentioned to my podiatrist that all of my kids and their mates had buildings named after them on the layout, she asked me if she could have one also. So here it is. The building kit was converted from a Plasticville Post Office that I found on Ebay. After I carved and sanded the previous markings off the  front of the structure it was simple to print out new signs on cardstock and secure them with double sided tape. I hope she likes it. 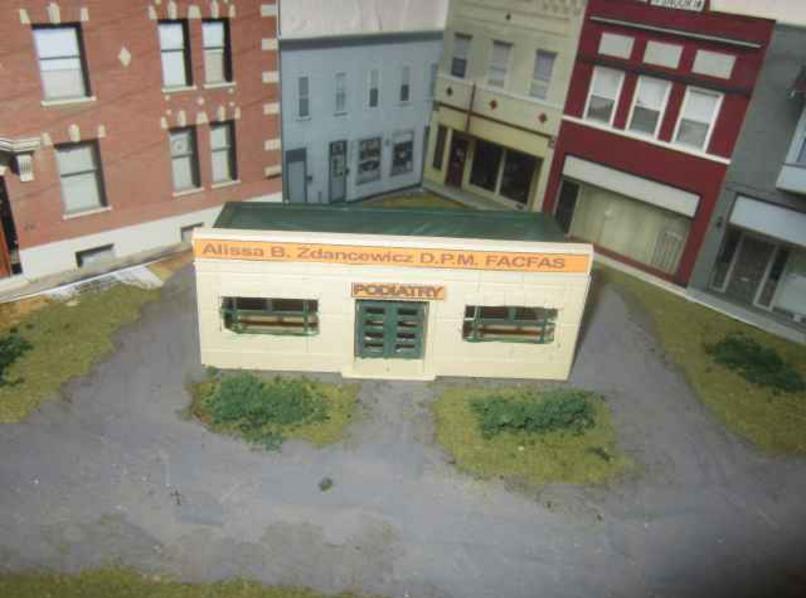 Above are two photos of the repaired area. The top photo show about 90% of the track that was replaced, the bottom shot is a close-up of the cut made to release the lift out section (the area on the right that has no ground cover on it..

The ballast on this section of track has been reinstalled. The area between the track and the road that parallels it for a short way has had ground cover installed and the bare plywood areas of the lift out bridge have been painted with a dark green paint. I prefer not to install ground cover on the lift out section as when moved it is generally to a vertical position and I would not want loose particles of ground foam falling to the floor and creating a mess. See below..

Here is the after picture. The trees will be added tomorrow. 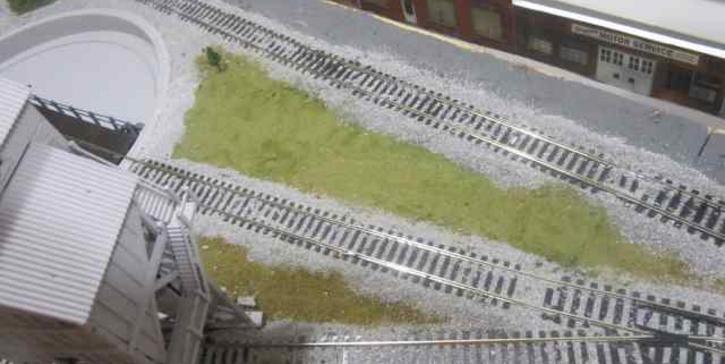 When I left off Page 10, I mentioned that I had a really bad piece of track on the curve leading to the new portion of the layout. I was planning to leave that repair for another day but as often happens, I got the drive to get the repair done. My first step was to cut away the offending rails and discard them. I then scraped the cork roadbed free of ballast and made sure that the cork was smooth and even. I tried a section of flex track and realized that I needed a bit more than 36 inches of track to fill the gap, so I soldered two lengths of flex track together using nickel silver rail joiners and solder. I then placed the soldered joint roughly in the middle of the area to be replaced and used my Dremel tool to cut the rails to length. After the usual filing of the rail ends to get rid of burrs the flex track was inserted into the empty area and the same type rail joiners were used to connect the rails at both ends. Once The track was in place I resoldered the track power leads onto the outside of each rail. At this point a quick run-by with a locomotive determined  that the problem was solved. Then began the task of securing the new track to the roadbed using Atlas Track Nails. At the point where the new rails would be cut to allow the lift-out section to be moved I drilled several extra holes in the ties on either side of the position for the cut and secured those ends so the track would not move when the cuts were made. Now it was time to actually cut the track at the proper spot so the lift out section could be lifted out as necessary. The ends of the track did not move. A little filing of the rail ends to smooth the transition for the wheels of locomotives and rolling stock and the track laying was done. I will replace the ballast another day. 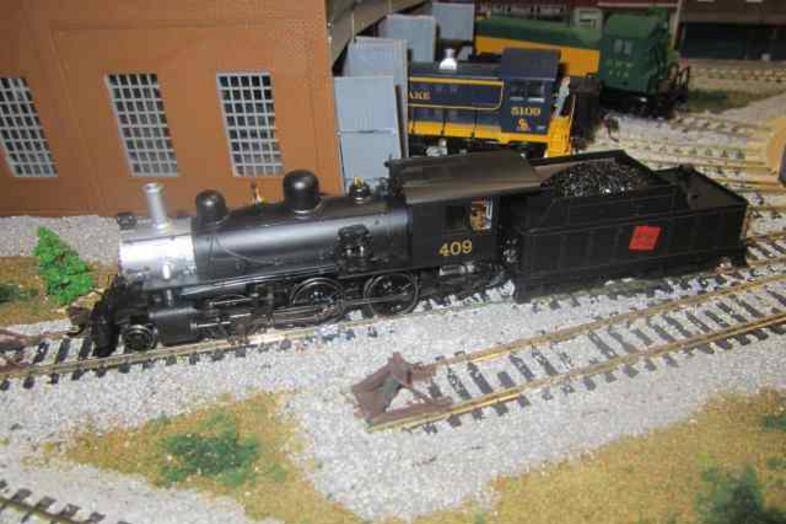 I have discovered another problem on the new portion of the layout. There are two tracks that lead onto the turntable at the locomotive servicing facility. The shorter one has an apparent kink in it caused by poor alignment by yours truly when laying the original track. Unfortunately, unlike the previous repair of the curve, this is in a spot which is going to be difficult to reach, given the structures that are in the way. For now the only solution appears to be to not use that track for anything. The other track to the turntable works fine so there is not much disruption to operations, only to my pride for doing a lousy job of track laying. I decided to remove the offending track and also remove the turnout since without the track there was no need for the turnout. The job was accomplished more easily than I had expected and section of straight track has been inserted where the turnout used to be. Of course, now I have to redo the ballast along that section of track as well as around the turntable pit where the old track used to go. I also have to remove the feeder wires which are no longer necessary and replace the ground cover and trees that got uprooted during the work. There is a picture that shows the track that has been removed on page 10 of the section titled "My Model Railroad".

One of the things about getting back into a hobby that I last delved into over 40 years ago is that I had stored some of my model railroad stuff in my son's attic. When I did so, I had no real thought of doing model railroading again but I just didn't want to throw the stuff away. Now that I am back into the hobby I discovered that I still had a couple of locomotives, old DC stuff, only good for display. Well one of those locomotives, an SW-1 by AHM was the perfect era for my layout. I discussed updating this loco with a fellow club member and we are going to give it a try. The cost will be about the same as for a new loco but the particular unit is not available in DCC and sound at any price. It will cost about $100 in parts and David's fee will be well worth it.The locomotive roster will be three steam and three diesel all being present in the same time frame I am modelling, early to late 1950s. I am not really rigid on the time frame, indeed most of the automobiles on the layout are far more modern, and the "rivet counters" among us would add and the wrong scale too. I realize that but one must also understand that "Hot Wheels cost about $1 to $2 each versus the 1/87.1versions go for 10 to 20 times as much. It will be a while then before I amass enough of the properly scaled cars and trucks to replace the old "Hot Wheels" on the layout.

The three photos above introduce the latest aquisitions. The steam loco #409 will have the CN logo removed or painted over as will the NW-2 in the middle photo. I am not repainting the locos, just removing the old road name. One of these days I will get custom decals made for my freelance railroad but for now they will have to make do with a patch over the previous road logos. The loco numbers will stay the same, mainly because they are IDed by those numbers on my DCC system. The dark green and yellow loco in the upper left is a DC loco which is just there as a display. I keep that track shut off. I have emailed a fellow member of my local model railroad club to see what is entailed in adding DCC and sound to this loco. It is very old 1970s at least, so I do not hold out much hope..The two new locos were purchased via Ebay at very good prices and they will most likely be the last locos I purchase for the layout in the foreseable future. Of course I do still have a few empty tracks one on the other end of the layout and one or maybe two at this end.

The two photos above are of the new backdrop building flats that I sourced through Ebay. The pictures were printed on a vinyl photo paper. I procured some 20 x 30 foam core from my local Michaels store and after some searching I found some spray adhesive at my local hardware store. Michaels and Harbor Freight both had none even though their web sites said they did. After gluing the photos to the foamcore, I cut the foam core at the edge of the buildings and 4 1/2 26" sections made up the complete run. I have yet to paint the edges of the foam core and mount the sections permanently on some form of stiffener. I do plan on repeating this project on the other portions of the layout in the future. I will have to find different photo strips however as seeing the same buildings in two different towns would not be ideal. The work continues.