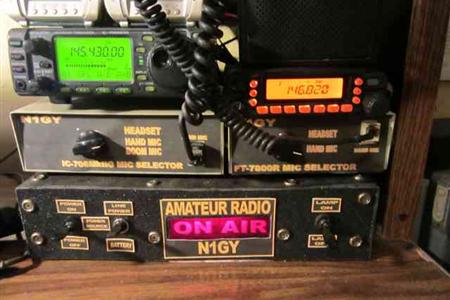 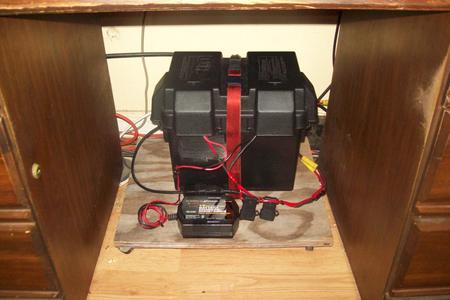 Back-up Power For Your Home Station

One way to keep your home station on the air during a power outage.

Here is a close-up view of the controls for my power distribution module. I notice the labels are not quite as straight as I would like but you get the idea. Update: I have since replaced the somewhat askew labels under the power source selector switch with one label that contains all the same info. Being one label it of course is now considerably better aligned than the old ones.

I have recently rebuilt a battery back-up system for my home station. I figured I would describe the system in case anyone is thinking about doing something similar. First a couple of disclaimers:              1. I am aware that it is best practice not to store the lead-acid battery inside. However, in my case there is no easy way to accomplish outside storage without wiring runs that are far too long. I do not have a garage, just a carport and it is at the opposite end of the house from the radio room. I have had a battery back-up under my desk for about 10 years without any problems, so I will continue to do it this way. If you have a convenient place like a garage or a shed that is close to your operating position, then I woul;d certainly recommend placing the battery (or batteries) there.

2. My system uses manual control of the switch-over from line power to battery power. If you wish to make that operation automatic, there are plenty of devices available to do that.     My system is built into a home-made enclosure built of ABS plastic panels held together with wood corner braces. The panels are secured to wooden blocks in the four corners with deck screws and finish washers. If you have, or can obtain a suitable commercially available enclosure, by all means go for it. I needed a relatively low, wide and deep enclosure because two of my radios and their associated mic selectors sit on top of the power distribution module.

The feed from the line power supply is fed through a 30 amp circuit breaker to one side of a DPDT(Center OFF) switch that is also rated at 30 amps. The positive leg goes to one pole on one side of the switch, the negative leg goes to the other pole on the same side of the switch. Because I wanted to keep the fusing on the battery very close to the battery, I used two 30 amp automotive blade fuses (in holders) right at the battery itself and did not use a circuit breaker in the module. Again the positive leg from the battery goes to one pole on the other side of the switch and the negative leg goes to the other pole on the same side of the switch. The feed to the power busses is then fed from the center poles of the switch with the positive and negative legs matching the inputs from the battery and the power supply. This is the basic system and can be used in that form.of the toggle switch. I placed all of the controls, breakers, and readouts on the front of the enclosure since there is obviously no way to read or use them at the back. THe back side has the three power-pole connectors ganged together in a single block and secured to the back wall of the enclosure.  After all else was built, tested, and operational, I created small labels for each of the circuit breakers and the switch out of cardstock printed on my PC and attached them to the front panel with double sided adhesive tape.

Apart from it's primary function the power module also elevates the radios and their associated mic selectors about 3 and 1/2 inches above the surface of the desk. This makes the mic selectors easier to operate and places the radios closer to eye level.

This addition once again brings the station into full operational status with regard to emergency communications. I figure that with the current battery, I have about 24-36 hours of operation available provided I keep my transmissions short and only have one radio on at a time. I am planning to add solar panels in the future which will extend the opeational time further. I mused to have a separate "ON AIR" sign at tmy operating position but it has also been incorporated into the power distribution panel. It comes on when the power supply is activated and goes off when the PS is shut down. I could have had it operate only when I was transmitting but since ham radio involves listening as well as talking, I thought it a good idea to keep it on anytime the radios were on.