Today was a day of doing the details, in a way, The switches that control power to the locomotive storage tracks around the turntable in Phase 1 have been added and all tracks work properly. The switches have also been numbered. I have added a second coat of paint to the fascia around the addition to Phase 1and modified the diagram for Phase 1 so that the storage tracks are shown and identified. I am still planning on adding a few trees around the Phase 1 addition but at the moment I cannot find my awl so I will have to use my drill for the holes for the trees. I am very pleased with the progress and appearance of the layout if I do say so myself. I have ordered two more locomotives, an EMD GP-9 with the phase II chopped short hood and just to add variety to the mix of locos an EMD F-3A streamlined diesel loco from the 1950s. Both are equipped with DCC and sound decoders. I also ordered a foam cradle so I can work on my trains without the risk of damage. Last night I discovered that my smallest loco, a GE 44-tonner had barely enough room on it's storage track in Phase 3 so I added another inch and a half to the track. I just piled the ballast around the track as in the prototype and used my usual scenic cement to hold it all in place. THe 44 tonner is the only loco that does not have a sound decoder in it already but I may try to add one if I can gather the courage to disasemble the loco.

Here is the 80 ton 3 truck Shay locomotive in all it's glory. The coal load that would go in the empty spot behind the cab will have to be cut down to make room for the speaker but everything else will fit into the water tender at the back. That bright spot in front of the loco is a small package of detail parts that I will not attempt to put on until the DCC and sound work is done.

Well, the Canadian National F-3 that I sent back to the company for warrantee work is on it's way back to me apparently no better than when it left. The technician tried to upsell me to a "better" decoder for another 50 bucks but I was not really buying that story. When it comes back I will have to decide whether I want to spend more money on a different decoder or just retire the F-3 to a static display. Both are possibilities.

These two photos show the switch panel for the addition to Phase 1 and the amended diagram with the proper identification of the storage tracks.

With the F-3 on it's way to Nevada for Warantee service, I was very pleasantly surprised today to find out that the Bachmann Shay that I ordered will be delivered today Wednesday instead of Friday. The Shay does not have DCC or sound to my knowledge but then it was about $100 less than the few that do have those accoutrements. I have put a request in to XL systems to see if their universal steam sound decoder has the ability to simulate a Shay. We shal see. Their decoders are OEM for MRC locos and I have one of their decoders in my 0-6-0 Bachmann loco already and I am very happy with it. The main thing about XL decoders is the price: $31 versus $100 + for some of the other manufacturers. It kind of makes you wonder what profit margin the others are making on their decoders.We shall see.

My Shay locomotive is in my possession and it looks wonderful. It does have the DCC ready plug in the water tender, according to the paperwork that came with it. I have not run the loco yet because it does not yet have the DCC board in it yet. Adding DCC would be relatively easy and not too expensive but I want sound along with the DCC so that will take a bit more research. I think I am done buying locomotives for a while, I still have two that are not on the layout yet. One is having DCC and sound added by a friend of mine and the other went back to the company for warrantee work to fix a bent axle on one of the trucks. That sounds minor but in reality it is a major problem. The bent axle binds up the mechanism and the locomotive will not run properly in that condition. Ah Well, nobody said working on the railroad was easy, not even in miniature.

Today, June 4, I added some trees to the storage track extension of Phase 1 and touched up some of the ground cover on that module. Module is perhaps not the right word as the layout is not made to be portable but it was created in sections which were installed and screwed together before laying track and doing all the other things that go along with building a model railroad. The scenery was added after the sections of benchwork were installed and track was laid and ballasted. That way I could use the ground cover or "grass" if you will to neaten up the edges of the ballast. From the look of the picture below, I did not do a very good job of neatening at all. I will make an attempt again now that I have found some more 70% rubbing alcohol to pre-wet  the scenic materials.

2-6-0 Mogul Row 5 S-4 diesel switcher, GE 44 tonner switcher.Still to come one NW-1 diesel switcher which is having a DCC and sound decoder installed. The CN F-3 and the Shay await their turn in the back shop to have theie decoders installed and /or updated. The picnic tables and benches to go into this scene are on their way but have not arrived as yet.

I got an answer back from the seller about the F-3 that was defective. They are taking it back and sending me another one. Yay!!. The loco is already packed up, labeled and ready to go to the Post Office tomorrow morning when I come back from an appointment. Great news. On another note, I touched up the paint on the fascia all the way round the layout yesterday. Unfortunately, the type of 1/8" hardboard I purchased does not take paint very well on the white surface. It scratches easily exposing the white undersurface. Lesson learned but I doubt there is enough time left to me to do another layout. I will just have to be careful when working around the fascia. Also I have ordered a non sound DCC decoder for the Shay locomotive. I would have liked to do a sound decoder but the Shay is probably going to be more of a roundhouse queen than a hard worker so I just could not justify spending another wad of money for the fancier decoder. My switcher that David has been installing a sound decoder in for me will be done soon and then I am finished buying locomotives for a while. 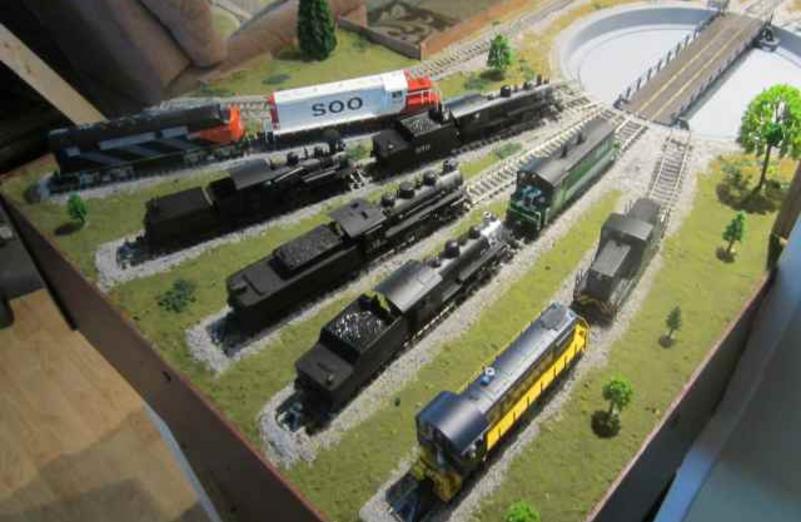 Page 14 had reached the end of it's space allotted so it was time to add Page 15. I have nothing to put in it yet but as a model railroad is never really "finished", I am sure there will be enough material to fill it and more in the future. 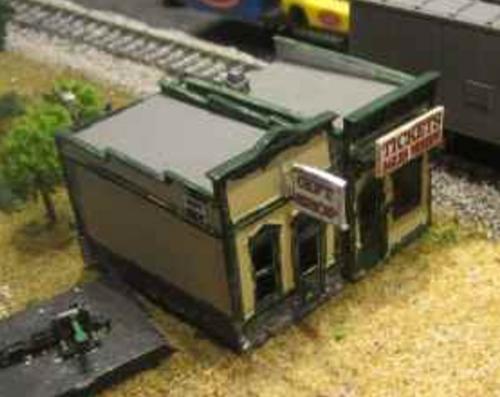 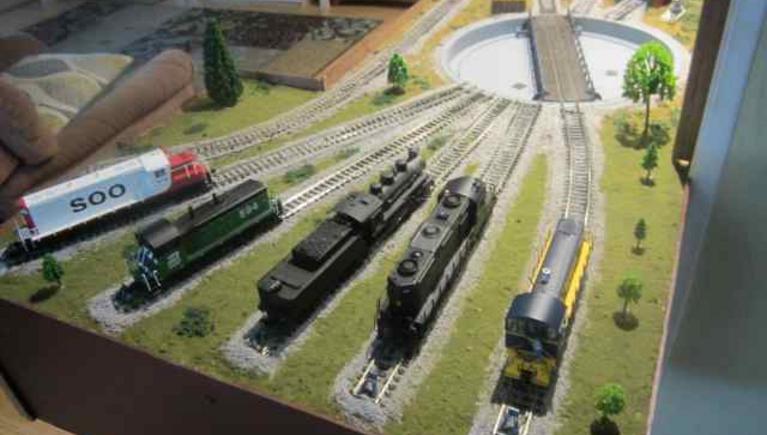 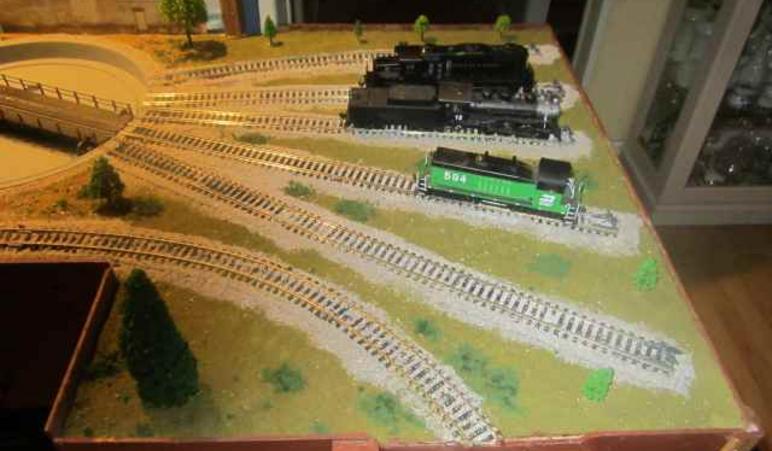 These are the newest additions to the layout. The Ticket Booth and the Gift Shop for the Railroad Museum

Today, Friday, June 5, 2020, I realize that I have a lot of work left to do on my .model railroad. Not so much on the track or the scenery, although there is plenty of work there too, but on my rolling stock. I tried to run a train around the layout last night and it was an unmitigated disaster. Freight cars kept derailing until I barely had a train left. I pulled out the postal type scale that I bought to weigh cars with and discovered that virtually all of the rolling stock that I had purchased recently was woefully under weight. Some of them also had trouble with trucks snagging on the coupler boxes etc. Most of the evening was taken up with adding weight to the cars to bring them up to NMRA standards and a few were sent to the virtual RIP track to figure out why the trucks were snagging where they shouldn't. THe good news was that the locomotive I was using had no trouble with the load nor the track. It ran very well. Another happier note I saw from E-Bay that two of the four parcels I am expecting will arrive today. The rest should be here on Monday next. More discouraging news today, Saturday, The sound decoder I thought I had ordered almost a month ago was not ordered after all. Apparently the order was started but the cart was abandoned part way through. I am reordering it today so that hopefully it will get to the guy who is doing the install quickly.

The locomotive herd keeps growing. The latest addition is the Soo Line GP-9 Phase II and still to come is a CN F-3 that I expect on Monday and a 3-truck Shay which should be here on Friday the 12th. The Shay will need a decoder install  to be fully functional but that will come later. The CN F-3 is already equipped with a sound and DCC decoder.After a bit of kerfuffle all of the locomotives on the layout are all properly programmed with their road number as their "address" and most of the rolling stock has been properly weighted and couplers adjusted for proper operation. I await some HO scale picnic tables and benches that I ordered so we can add a bit of "railroad museum ambience to the area in the above picture.