​The hose clamps that I use to assemble the mast are made of stainless steel and have a unique "key" that is permanently attached and makes these hose clamps truly a "no tools needed" item. They are available from MSC Supply on the Internet. They are not listed with the rest of the screw type hose clamps for some reason but you can find them on page 4191 of MSC's "Big Book" on their web site. 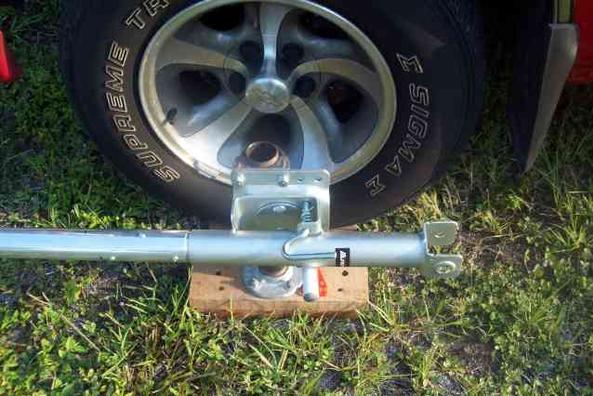 A close-up of the mount shows the details like the safety bolt with its white handle. The safety bolt adds a second securing pin to the tilt mechanism so that the mast cannot be accidentally dropped if something snags the spring loaded pin with the "J" handle. The holes in the oak base are for 12 inch landscaping spikes to pin the base in place if the car is needed elsewhere. If you were to mount this tilt mechanism on a wooden post for a permanent installation, the "U" shaped bracket where the jacking crank used to be would also make a good spot for a safety bolt or other method of ensuring that the mast is not accidentally released.

Today, January 31, 2016, I got a surprise. A friend, Jim Woodson, KE4INM, informed me that I was mentioned in a user group devoted to the National Parks On The Air yearlong event. He even sent the picture to prove it. The ham who took the picture, Will Henderson read my article in a 2013 QST and built a similar tilt mount that fit under a wheel of his car and a fine job he did. I have since modified my tilt mount to fit into a trailer hitch receiver on the back of my van but then I did lose the ability to drive away once the antenna is set up. Will used a flat piece of metal as the base, which is fine as the wheel of the car or van does not have to rise to get onto the base.

This is the new tilt base. I used a gutted boat trailer jack for the tilt mechanism, and adding a second safety bolt to ensure that it stays upright. The former trailer jack is mounted up-side down to an existing "Bigfoot" mount that I have used for years. It is also home-brewed. The added safety bolt is a 4 1/2" carriage bolt with a handle made from 1/2" PVC pipe. It is attached to the tilt mechanism via a U-nut found at an auto parts store. This way, I only have to unscrew the bolt just far enough to clear the tilt mechanism and the safety bolt stays right on the mount. Probably harder to lose it that way. 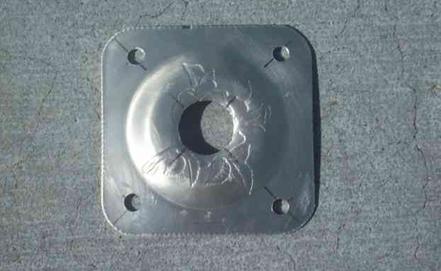 The guy ring was made from an aluminum "candy dish" that my wife provided. It is surprisingly heavy gauge metal and certainly, with its floral design, has to be a unique guy ring. 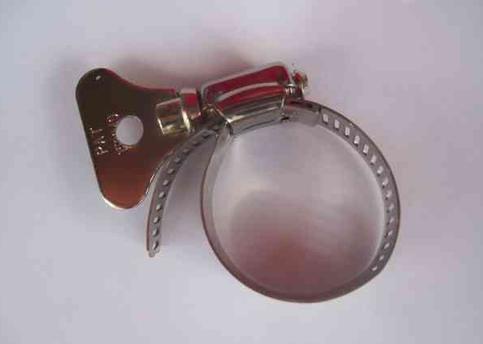 This diagram, courtesy of the importer and retailer, shows the parts that were removed from the stock trailer jack. The Image shifted a bit in loading so the parts to remove are the ones inside the boxes. The top cover is held on by a rectangular spring, easily removed. A roll pin must be driven out of the crank. Once that is removed the gear and indeed the entire crank handle can be removed. If you have left a little play in the inner tube (the one that has the caster attached) it can be pushed up allowing the pin underneath the other gear to be removed. The inner tube can then be removed. 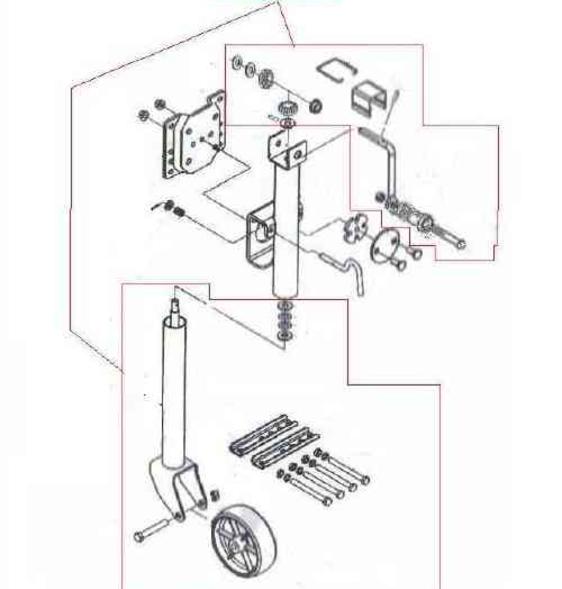 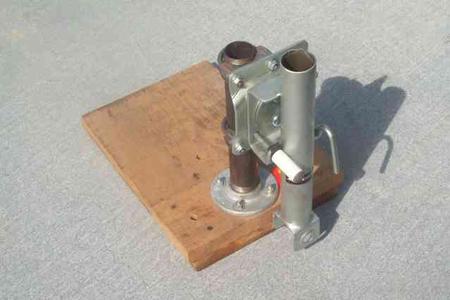 This is an illustration of the trailer jack as it comes from the retailer. Further down the page you will find a diagram showing the parts that were removed.

The tilt mount and mast fully up and operational. The guy straps are a set of four 14 foot tie-down straps with ratchet mechanisms from a discount tool store. The white cord is a halyard for raising various wire antennas after the mast is up. The vertical antenna at the very top is a homebrewed VHF/UHF antenna. 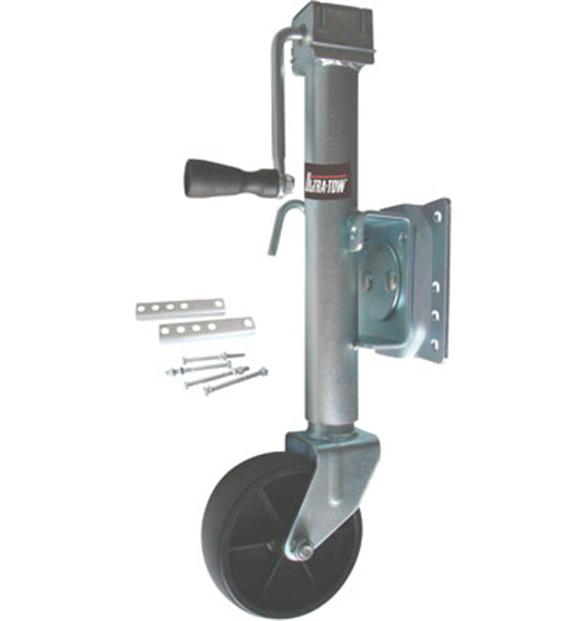 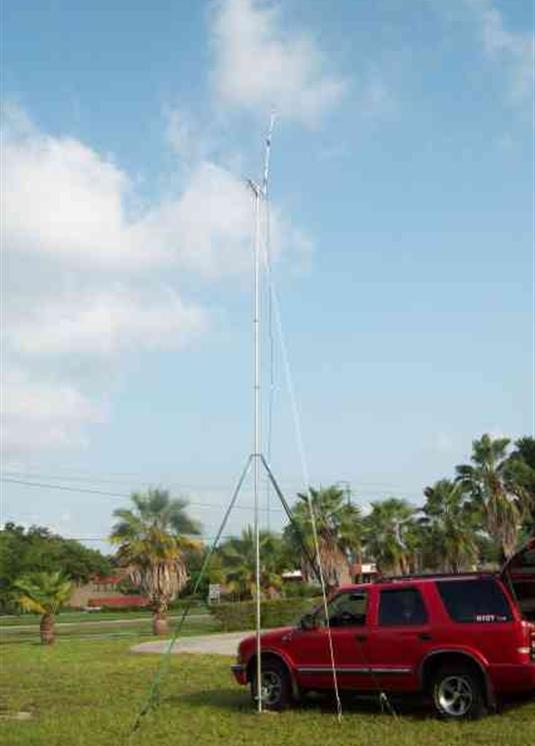