This is the new caboose I mentioned on the previous page. Nothing fancy but it replaces the caboose that I destroyed in my initial attempt to kitbash a transfer caboose 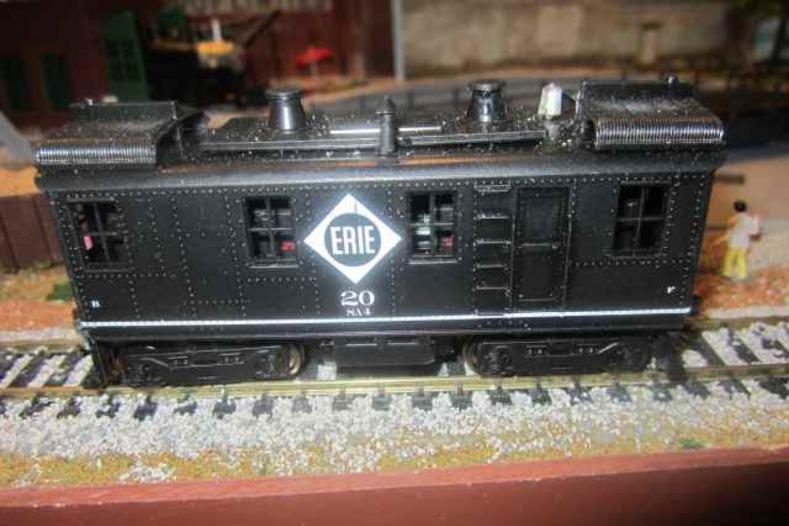 The process has begun to add additional trackage to the layout. No, not another bridge, but another yard of sorts. The section I call Phase 1 will get widened from 18 inches to 24 inches along most of it's length. This will provide space for a 3 track yard to the west of the Phase 1 main line. I plan to store the American 4-4-0 and it's train and the John Bull and its train on two of these tracks and possibly some dummy locomotives that are for display only. Also stored there will be items like the snow plow and the scale test car. A portion of the fascia will be moved out to the new front edge so that the various items like switches and diagrams will still be easily viewable and operable. This extension will eliminate the current shelf in the middle of the front of Phase 1 but it seems to be more of a catchall anyway. I already have the flextrack necessary in hand I just have to find one RH #4 turnout and two LH #4 turnouts to complete the trackage. The benchwork will be 1/2" plywood over 1 x 3 lumber as was the rest of the benchwork. I may have to buy some more plywood to do the job as all I have left are scrap pieces. The scraps may be enough, we shall see. My son in law Gabe is coming down next Sunday to assist with the construction as some aspect will definitly need more than two hands. The project should be fairly simple if time consuming but once we get the framework done and remount the fascia, the rest can be done piecemeal.

Today is Tuesday and a large part of the preparation for the widening of Phase 1 has already been done. I removed the curtains and fascia of Phase 1 and dismounted all of the switches and accessories that were mounted to the fascia. I assessed my stockpile of lumber etc and all I have to buy is one 8' 1x3 and a 2' x 4' project panel of 1/2" plywood. Everything else is in hand or on it's way. I have enough track, enough turnouts and enough cork roadbed to do the entire job. I already have the electrical switches to control the three tracks of the yard individually in hand and mounted on a panel. I also picked up insulated joiners and power feed joiners at the club store today. I probably will have to buy some more ballast for the new trackage as I am getting pretty low on that item. I should have enough ground cover and trees to do the scenery. There is enough room once the addition is in place to add a couple more structures. Maybe a single stall engine house or something similar. It feels great to be anticipating more construction on the layout. The additional trackage will primarily be used to store the museum trains and display items, leaving more space around the turntable for locomotives

Here is the new addition to the front of Phase 1. This will provide space for a 3 track yard and one more museum building. It is possible that the gift shop and ticket booth may move from their current locations to space near the new yard which will be where most of the museum displays will be parked, As you can see, coat 1 of paint has been applied, coat 2 will be applied later today. Track work will begin on Monday. Gabe also came up with a neat way of keeping the drawer sets from retreating back under the layout./ He put a 1 x 3 spaced out from the wall by about 9 inches behind the drawer sets. The spacer is not screwed down in any way but it serves to keep the boxes where they are now. We moved the airbrush equipment to a new location under the turntable. Somehow I cannot find any more of the self stick velcro to reinstall the curtains but I am sure that a solution will be found. A second coat of paint has been applied and the addition looks much better. As soon as that coat of paint has fully dried I will reinstall all of the accessories that need to go back on.

While digitally thumbing through some Pinterest items I came across this photo of the real version of my boxcab, same number same herald. I see I have some detailing to do to bring my 1/87th size model into sync with the real thing. The model is the photo below.

Today was avery busy day. As I mentioned in the above paragraph, I went to Home Depot and brought home 2 more 8' 1 x 3s and a 2' x 4' project panel of 1/2" plywood. Then I really over extended myself by preparing the new fascia panels (8" x 4') oof 1/8"hardboard. This meant deciding where all the various openings would have to go for things like the cab buss panel, an NCE UTP panel, the 3 switch panel to control the new trackage that will be installed after the benchwork is don. Then there is the AC voltmeter, the 2 switch panel for the existing feeder tracks on the North side of the turntable and of course the ON/OFF switch that powers the entire NCE DCC system. All this meant a lot of mess on my workshop floor and a lot of ache in my back. I think I will rest up tomorrow as nothing more can be done until my son in law Gabe turns up on Sunday.

This is a model of a scale test car. In the real world these are very precisely wheighted cars which are used to test railroad scales all over the country. Each railroad will have several and routinely test scales on thei system with the known weight of these cars. 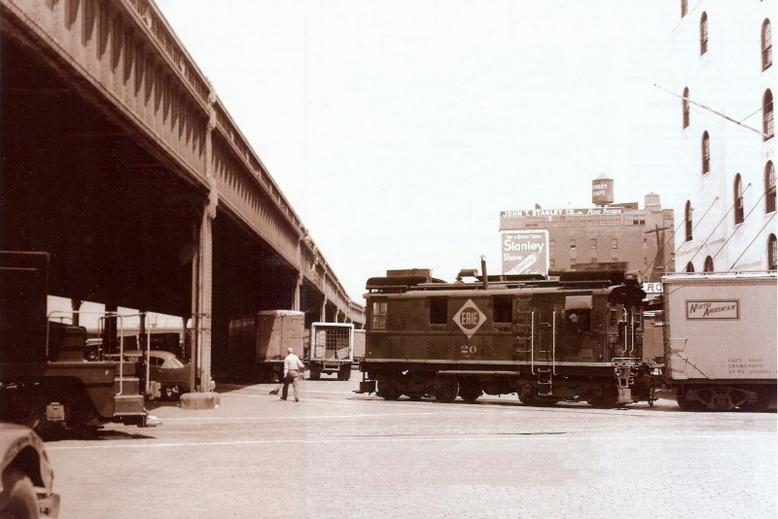 The latest addition to the locomotive roster is an RS-3. A somewhat older loco it will eventually pull double duty for the museum and for the short line.

Here is a shot of the "mess". The fascia has been removed in preparation for thje construction of the new portion of the layout which will be about eight feet long and about eight inches wide. This will provide enough room for a three track yard and possibly one more trackside structure. Construction is slated for this coming Sunday and all the materials are in hand. I made a trip to Home Depot this morning to get more 1 x 3 's and a 2' x 4' panel of 1/2" plywood. All is now in readiness for Gabe to come over and assist.

This is the last original structure to go onto the layout. I built the island it stands on several months ago but could not find a suitable lighthouse (at a suitable price) until now. It even came equipped with a flashing LED. I have a switch on the fascia underneath the lighthouse that turns the LED off and on. The circuit is inside the lighthouse. I do have another circuit coming which may provide a more realistic flash sequence to more properly imitate the rotating beacon of a real lighthouse. Finally, the harbor scene is complete. After further reflection, I have decided to leave well enough alone. The current light works, albeit not perfectly prototypically, but trying to change it now invites disaster.

The solution for the derailments at the crossing onto the tilt up bridge has turned out to be simple but disappointing. I have removed the bridge, turning the layout once again into a point to point railroad. There are turntables at both ends of the layout to turn the steam engines and any cars that might also need to be turned. The real railroads rarely make a complete loop. They are almost always a point to point arrangement. So it will have to be for my railroad. I cannot deny that I am disappointed but this is more prototypical and until I rebuild the entire layout it will have to be so.       .

Photo from the collection of Philip M. Goldstein at Train web.com. Photograph by H.H. Harwood. This was the second box cab ever made after CNJ's experience with their #1000. 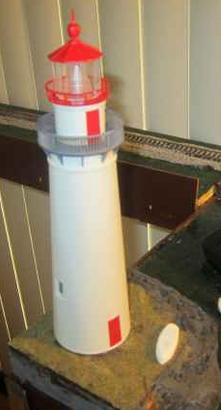 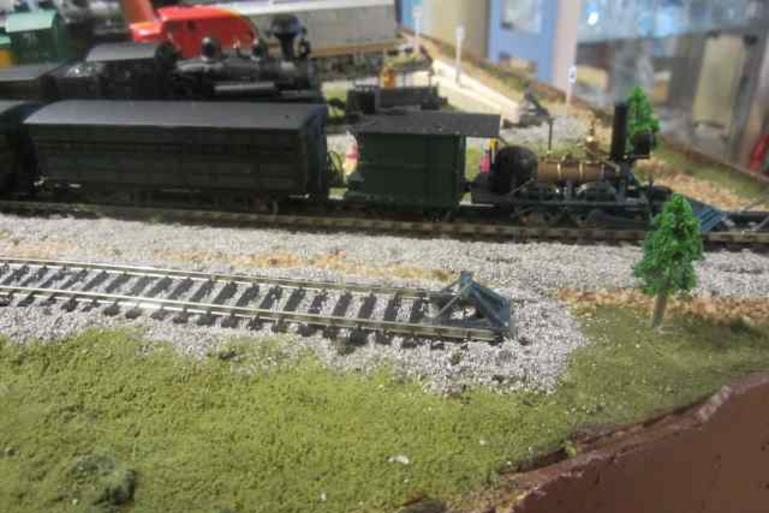 Today, Saturday, I took my ex CN 2-6-0 steam loco to the RealRail model railroad club, of which I am a member, because it suddenly developed a short circuit. Dave F. took a look at it for me and discovered that one of the tender trucks was on backwards. Also there was a loose wire so once all the repairs and repositioning was complete, I had a working loco again. Many thanks to Dave. We also discussed adding a DCC decoder to the "John Bull" but decided that It would have to go into the first car behind the tender as there is no room in the tender because that is where the motor is situated. Something for a future project.

The above photos show the latest aquisition for the museum. The locomotive "John Bull" and it's entire train. It luckily just fits on track 3 of the turntable tracks so it will be displayed there for the foreseeable future. As soon as The solution is found for the derailing problem on the adjacent portion of the main line there will be more figures added around the new exhibit. BTW, I did repair those figures that got displaced during the recent track replacement.