I recently purchased a 1.25 meter radio for the home station to complement the one I have in my van. Locally we are pleased to have two 220 repeaters available to us through the good offices of Mike, K4CVL. One is on 224.620 and the other on 223.900. When I purchased the unit for the van, I also purchased a magnetic mount antenna for the band, but when I got the unit for the house, I thought I would try to build a home-brewed antenna.

A trip to my favorite hardware store was most illuminating. Not only did I find copper clad welding rod (some may call it brazing rod) in 3 foot lengths and 3/32" diameter, I also found that the blue series of crimp terminals were just the right size to terminate the radials made of this rod. I was worried about the strength of the connection of the welding rod to the center conductor of the SO-239 flanged connector until the friendly gentleman at the hardware store showed me a small device called a 1/4" brass insert from the plumbing aisle. This can be crimped and soldered to the end of the radiator element leaving enough space for the center pin of the SO-239. With all of my supplies in hand I headed home to begin construction.

One tool that helps immensely with the task is a small hand held torch that runs on the same fuel that I used to fill my cigarette lighter before I stopped smoking. With the torch, I can easily heat the brass insert on the end of the vertical radiator and fill the opening with solder. Obviously the element is upside down for this step. I then placed the SO-239 in a vice with the center pin upwards and placing the brass insert over the pin I heated the insert with the torch until the element and insert slid smoothly into place over the center pin. THe vertical radiator is now firmly soldered to the center pin and reinforced by the brass insert surrounding it.

Then it was time to cut the radials to length and attach a crimp ring terminal to one end of each of the four radials. THe only "problem" encountered here was that any roughness at the cut end of the radial element may have to be filed down to let the crimp terminal fit over the end. I removed the plastic ferrule (blue in this case) from the terminal because the next step is to solder each ring terminal to the very end of each radial. For this task I used my 140 watt Weller soldering gun and in less time than it takes to write about it all four radials were done. With the terminals soldered, the next step was to bend each radial to a 45 degree angle just about one plier jaw width behind the ring terminal. The 45 degree angle is not chosen at random. A vertical antenna with radials bent down at approximately 45 degrees will have a natural impedance around 50 Ohms making it a good match to the radio in use.

To attach the radials to the flange of the SO-239 I use small bolt/nut/lockwasher sets in 4-40 size about 1/2" long. These do stick up a bit when secured but do not affect the operation of the antenna at all. I used the 1/2" length because trying to hold each radial and the bolt and the nut and the lockwasher and put them all together is somewhat simplified by using a slightly too-long bolt to hand everything on. If the esthetics bother one, I suppose the bolts could be cut after assembly. One might ask -"why not just solder them onto the flange?" and indeed others have done so. I used stainless steel hardware and although the ring terminal and the silver plated flange of the SO-239 might accept solder well, the stainless steel does not. Therefore, I used lock washers to reduce the loosening of the connections to the flange.

Our antenna is now complete except for a way to mount it. My solution, and I am certainly not the first to do it this way, is to attach the coax to the antenna and then slide the coax through a length of 3/4" ID PVC pipe or metal conduit. The antenna is unaffected by either and I have used both at different times. THe pipe can then be secured as one might wish and the coax run to the entry point to the station. In my own situation I secured two aluminum straps that were bent in a lazy "s" shape and screwed the free ends of the straps to a solid portion of the house. The PVC pipe was thus elevated beyond the eave of the house and the antenna works great.

I have included measurements for three different bands but one can easily calculate the appropriate sizes for any band. The only limitation is that at some point 3/32" welding rod will be too thin relative to its length to be self supporting or going the other way that the idividual parts become too small to be easily assembled. 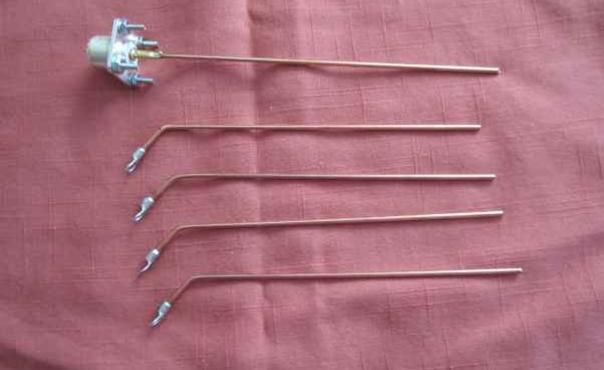 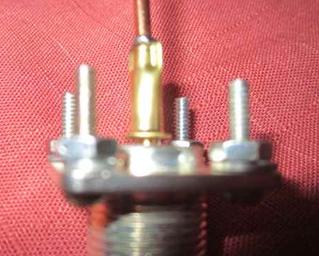 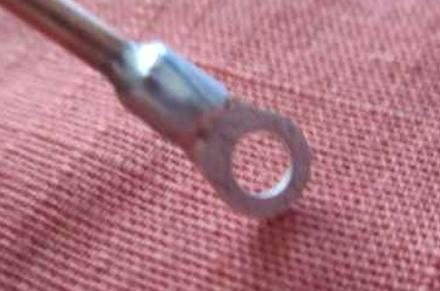 The completed antenna. This model happens to be the 70 centimeter unit but the only difference between this one and the units for other bands is the length of the radiating element and the radials. Very neat and simple design that works very well.

It is recommended that if the antenna is to be placed outside that the area around the center pin of the SO-239 and the brass insert be covered in some kind of RTV sealant to prevent water from getting into the connector. It is also highly recommended to seal the PL-259 that is connected to the antenna in a proper manner to prevent water entry into the coax which will result in degraded performance over time. 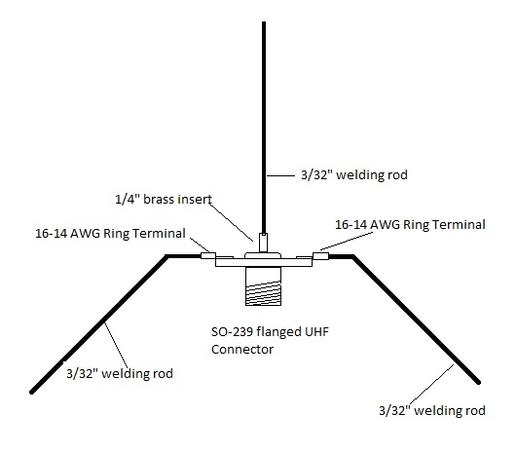 Here is the diagram which applies to all three bands. The only differences are the length of the radiator and the radials. Following are the sizes for each band

A closeup of the inner end of a radial. The crimp ring terminal has been soldered to the welding rod.

This photo shows the parts of the antenna before assembly. All the soldering is done. 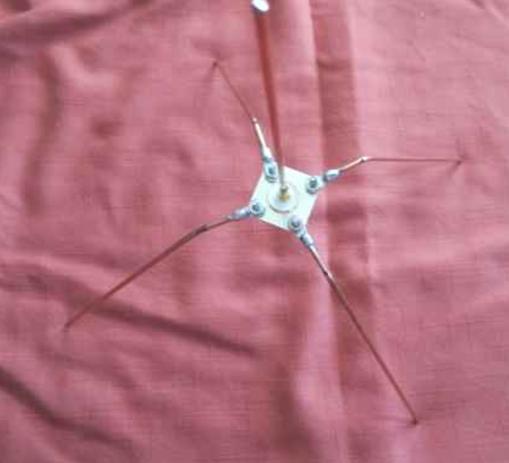