All of the track for the new section has been laid down and wired, including the six tracks where locomotives will be stored around the turntable. I also installed the base of the 3 stall roundhouse and added the track to the bays, although not without some effort on my part to maintqain the proper gauge all the way through the bays. I glued the rails in place with CAA glue and supported the entire unit on 1/4" plywood to match the 1/4" cork roadbed leading to the bays. The turntable operates smoothly and once I add the same gearing arrangement that was used on the other turntable I am sure it will work just fine. Each of the six tracks on the south side of the turntable is wired through a switch so that when the DCC is turned on I do not have all of the locos sitting there idling away. I also extended the NCE system via the appropriate cables and that too is working fine. Voltage on all tracks sits at 13 + volts AC so no significant voltage drop anywhere on the layout. On to structures and scenery. BTW, the two diesels that occupy tracks 2 and 6 are DC locos that are only there for display. The switches to those tracks are already shut off. As I aquire more locomotives and rolling stock they may yet be retired to a shelf elsewhere.

This is the benchwork for the new portion of the layout. The left end is almost 24" wide while the right end is only 12 " wide in order to give enough space near the doorway out to the "Florida Room". The bench work is secured to the floor and the wall and crosses two windows. The blinds are unaffected by the layout but the curtains that framed the windows had to be removed, at least temporarily. The will have to be shortened considerably if they are to go back up again. Track laying has begun although some of it may have to be redone as the track joints did not always fall where they were desired. In particular the track laid across the lift- out will almost certainly be relaid so that the cuts where the liftout ends will be better for operating the trains across the bridge. I also have to add protective walls on both sides of the bridge to prevent a train from taking a nose dive into oblivion should a derailment occur. I also have to add better lighting to the new portion of the layout and soon. I must thank my son-in-law Gabe for all his help in getting the benchwork done today.

The bridge is now powered up and the rails have been cleaned. I ran a test loco across the bridge and so far no problems.

Today, I had Carpal Tunnel Surgery on my Left wrist so construction on the new part of the layout is at a standstill for a few days. I did manage to attach ground throws to all 6 of the new turnouts but securing them will have to wait until the dressings come off and more track nails arrive. Before today I did manage to clean all track and run at least one locomotive over the new track when I moved it from the old engine facility to the new one. The base of the 3 stall roundhouse is installed on the layout but again completion of that structure will have to wait for a few days. 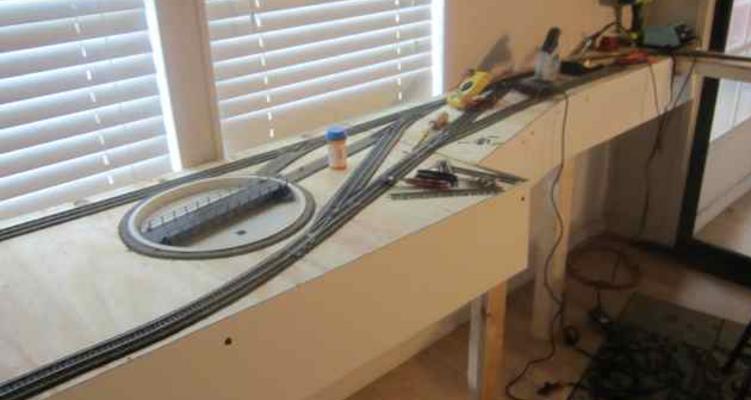 The adding of ground cover has begun. So far just a bit of green but there is more on the way from my supplier and by tomorrow night the roundhouse and turntable should be completed. My conmcerns about the curve at the North end of this latest benchwork were somewhat overstated. A quick bit of filing to clean up the offending track joint and at least for now, the problem has been corrected.

The new bridge to part 3 of the layout. I decided after much consideration to go with a simple lift-out section. It is about 36 inches in legth and probably about 6 inches wide to give the track enough space to start the turn onto the new portion of the layout.

Here is a shot of the engine servicing area of this part of the layout. Behind the water tank the small building is a speeder shed with a speeder. All of the turnouts on this part of the layout now have ground throws installed and operational. The crank mechanism for the turntable is on it's way from California. Tomorrow will be a day at the Real Rail Model Railroad club and Sunday I will begin ballasting the track, starting with the area around the roundhouse and working outward towards the bridge to the other portions of the layout. There are still several more buildings to erect and a lot of scenery to install. 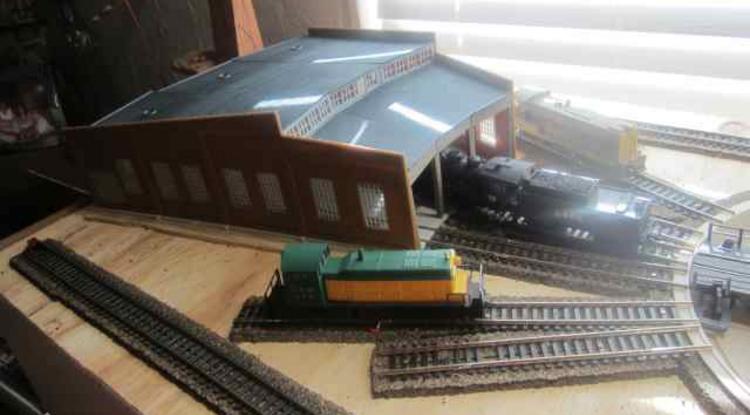 Iam happy to report that ballasting is complete.The doors to the roundhouse are on and the track has been cleaned. I discovered a broken solder joint on the lift-out bridge section that goes across the doorway and that has been repaired. I am not super happy with the curve from the lift-out section to the part 3 of the layout so that may get redone in a few days. The locomotive does get over the spot but it is not really happy about it and in looking at the track there appears to be a slight kink in the rails at that point. Of course I ballasted right past it so repairing it will be a chore and I am not looking forward to it, however, it will have to be done soon. 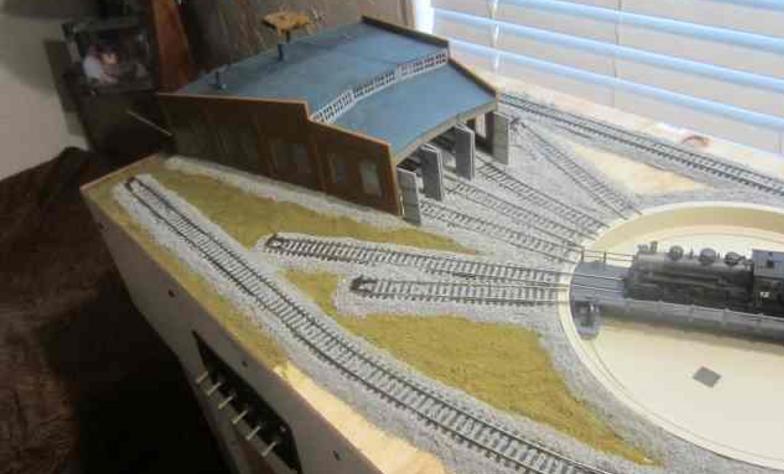 Yesterday, I managed to apply ballast to the tracks around the turntable. I discovered that I was running low on ballast so I ordered more along with more PVA glue which I mix 50/50 with water and a couple of drops of dish detergent. This mix seems to work well for keeping both ballast and ground cover in place. As a side benefit it also seems to glue the structures in place when they are surrounded by either ground cover or ballast

The new part of the layout is under construction and that is proceeding apace. All of the track has been laid except for the track around the turntable. That I will tackle tomorrow after I install two more of the same kind of lights that I added for stage 2. I still have to add wiring to bring power to part 3 of the layout and for that I definitely need more light. All of the tracks leading to the turntable from the roundhouse side will be wired so I can shut them off when the locomotives on them are not in operation. The project continues. 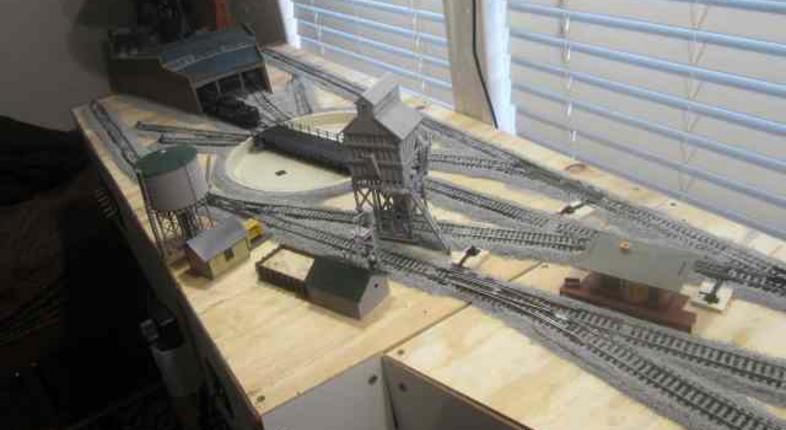 After a while I noticed that I was getting derailments at the west end of the bridge (the curved portion) so I replaced the track at that end and a portion of the track that it joins to. Problem solved.

As you can see from the above picture, ballasting of the track has begun in earnest. At this point there are about eight feet of track left to do and then I can move on to scenery. All of the initial structures are in place a few more may be added as the work proceeds.

Here is the roundhouse, minus it's doors at the moment and it's smokejacks also. My kit arrived with only 2 and 1/2 smokejacks so I think an email to walthers is in the offing. I must say, for a company like Walthers with as much experience as they have making kits for the model railroad hobby, that this kit was almost a disaster. The hinges for the doors dont fit properly, the roof sections dont fit like they should. Even the walls do not fit together properly. There was a lot of kit bashing just to build one structure. By contrast the Peco turntable almost made itself, everything fit properly and evewrything worked like it was supposed to. This is not the first Walthers kit that I have had trouble with either. Very poor workmanship on Walther's part. Their turntable kit was also a disaster, I eventually threw it away and bought a Peco unit to replace it. 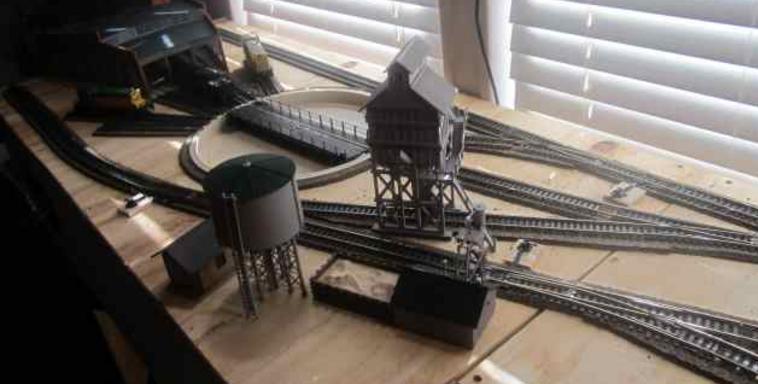