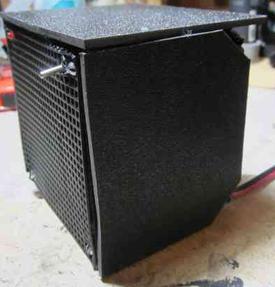 . The photo to the left shows the front of the fume extractor. The "plastic canvas"can be seen covering the fans to prevent errant fingers from getting into the fan blades. I used screws to attach the mesh as the duct tape kept coming loose of the plastic material.

The on-off switch and the LED were both moved to the front of the extractor. The slight OOPS next to the switch was the result of an errant drill (certainly not the operator's fault!!!!) The ABS panels on the sides were cut back at the rear corners to allow room to replace the filter material as necessary. The entire unit is much shorter and smaller overall, allowing me a better view of the tools stored behind it on the tool rack wall. The air flow is also improved by having both fans pulling on the same column of air. 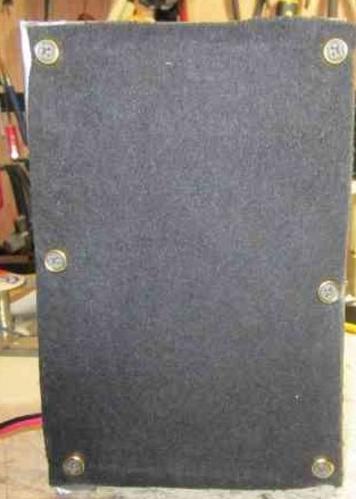 The other day, I was listening to a couple of local hams on the local repeater when the subject of the fumes from the job of soldering came up. The consensus was that for the occasional soldering job there was not much risk but that if one were soldering on a regular and frequent basis, certain precautions were wise to take. This started me to thinking about my own workbench habits. Since I am now building Power-pole power distribution blocks on a regular basis for sale, my exposure to the toxic elements of the smoke and flux coming off of the soldering tools and projects has risen significantly. I immediately began an on-line search for soldering fume filters etc.

While I found sources for bench-top fume hoods immediately, the prices were reason enough to pursue a more home-brewed solution. I also remembered that my son had given me a batch of computer fans several years ago. I checked and sure enough I had two identical 3.5" fans that operated on 12 volts DC nominally. I wired them in parallel and using my bench power supply fired them up. They both ran beautifully and very quietly as well.

Looking around my radio room, I found a cardboard box of the right shape, size and rigidity, it turned out to be the box my antenna analyzer came in. Using a compass and a utility knife  to draw and then cut two circular openings in the front of the box, I then mounted the fans to the inside of the front using 4-40 1/2" bolts and nuts. Using the utility knife again, a rectangular opening was cut in the back of the box in preparation for an activated charcoal filter panel. The filter material is available very inexpensively from several on-line sources.

I wired an on/off switch to control the fans and added a short run of red/black zip cord in 16 gauge to connect to the bench supply via Power-Pole connectors. A shopping trip to the local craft store resulted in a panel of what the retailer calls "plastic canvas". This is a 1/8" mesh plastic material which made a perfect front facsia for the fume extractor to keep errant fingers away from the fan blades. I wrapped the entire box in duct tape to strengthen the cardboard, of course leaving the front and back clear. After painting the front of the box black, a piece of the "plastic canvas" was cut to fit the front of the box and secured in place on all four sides with more duct tape. As I write this, I am awaiting the arrival of the filter material from Amazon, so as soon as it arrives and is installed I will add a photo of the filter on the back of the enclosure. Other than the filter material and the plastic canvas not one penny had to be spent on this project. The cost of a commercially available fume extractor of similar size and functionality would have cost over $50.00 even from Amazon, considerably more from some other retailers. I think I spent less than $5.00 for the whole project, even accounting for the parts that I already had on hand.

As I mentioned above, the filter material arrived today, on a Sunday no less, and it was soon installed on the back of the fume extractor. I decided to test the unit with all of the changes that have been made over the past few days. I fired up my new 200 watt soldering iron and let it heat up until the tip began to smoke in the usual manner. The smoke was speedily sucked through the extractor and none of it managed to get through the activated charcoal filter in the back. UPDATE: It is now Tuesday afternoon and the power supply (really more of a power brick) arrived from Amazon. I replaced the coaxial power connector with a Powerpole set and the fume extractor is now officially finished. I did ponder the possibility of replacing the cardboard box with one assembled using ABS 1/8" sheet plastic but decided to leave that for another time when the cardboard has worn out. JOB DONE!

WELL, NOT QUITE! After using the new fume extractor for a few days, I realized that the upper fan does very little of the work because it is above the point at which the fumes are generated. The bottom fan does most of the work. A redesign was in order. Same two fans, same wiring but now the two fans are in tandem, one behind the other. The filter material and the screen in the front were re-sized and in fact they were bolted or otherwise secured to the fan bodies themselves. The fans were bolted together using the same hardware that used to hold them to the cardboard box. When it was done and tested, the wiring looked a tad exposed so I added three ABS plastic panels to the top and right and left sides to neaten up the exterior. The results are below. 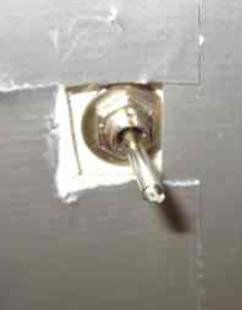 The photo to the right shows the back of the extractor with the addition of the activated charcoal filter. Without the filter the fans are just moving the fumes around the room, not removing them from my environment. I still have lots of filter material to replace this piece on a regular basis

The on/off switch that controls the fans. This is a sub mini toggle switch that I happened to have on hand. It controls the 12 volt DC coming from the bench power supply which is also controlled by a different toggle switch. Odd, I know but I could not locate a wall wart with enough pep to power the two fans (1.8 amps each) in my junque box. If and when I find one I will power the extractor separately from the bench supply.UPDATE: I found a suitable PS (originally made for powering a PC monitor) that can put out 5 amps and ordered it at once. At the stated price of $7.00 with free shipping it was a no-brainer. 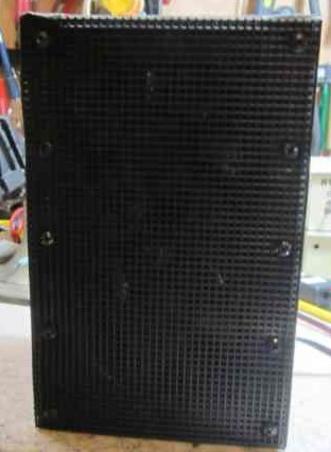