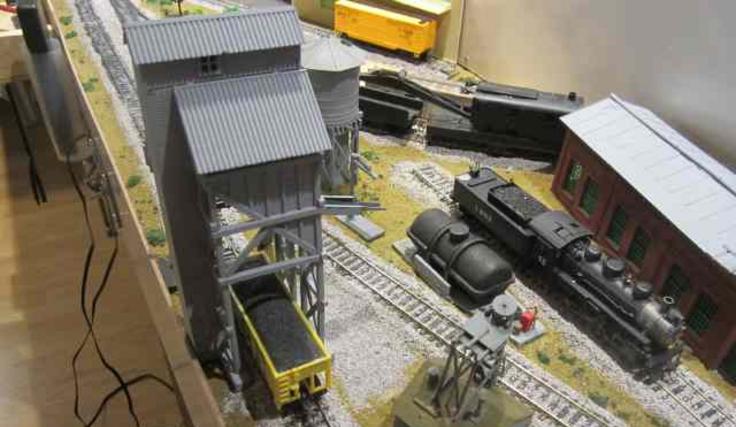 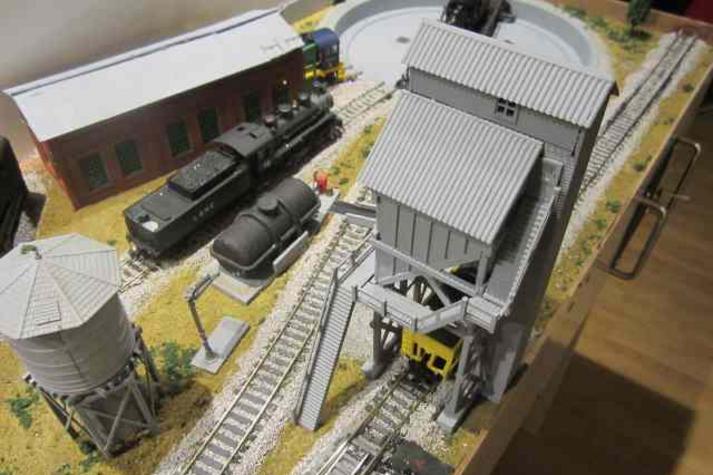 With two steam locomotives, both coal fired, I realized that I was missing an important part of the engine service facility. That has now been corrected with the addition of a coaling tower. It arrived unpainted like most Plasticville stuff but a bit of research both at the club and on-line gave me the direction I needed. All grey except for the inside surface of the coal chute. I even picked up a hopper car with a coal load that only needed a coupler change to make it right. Not bad for $1.00. The coal tower was similarly inexpensive and arrived in fine shape. 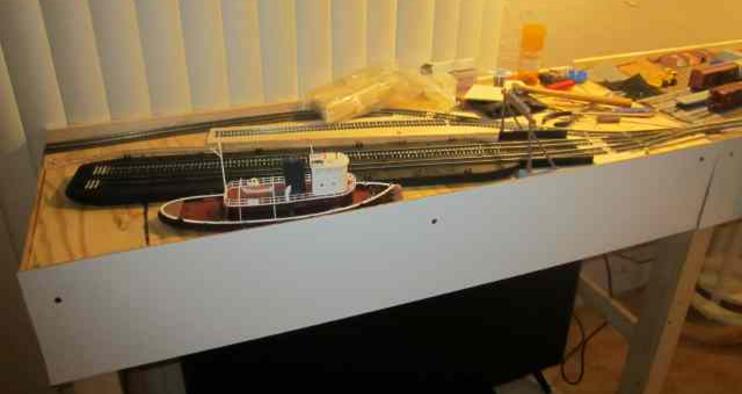 Tonight I built a railroad tugboat from a Walthers kit I purchased on Ebay a few days ago. I got a great deal on the price because it was an open box but everything was there including the decals which I may not use. That makes one more thing prepared for the next expansion of the layout. The next phase will be five feet long by 18 inches wide and include a car float (ready for painting) a car float apron, a longish dock with several buildings and a single track line that will lead to the next phase. The tugboat went together relatively easily although some aspects demonstrated that Walthers still does not have this plastic kit thing down just yet. There are far too few instructions, far too many fiddly parts that do not seem to fit correctly and some parts where the insrtruction is to bend the part to fit the place it is supposed to fit into. In the case of the tug boat, plastic railings to not take to being bent well at all. When Revell was making plastic kits they knew this and thus anything that required a ben had it molded in place, not left to the kit builder's varying talent level to hopefully get it right. Anyway, the kit is built and painting can proceed over the next few days. In Walthers defence, the kit was molded in a variety of appropriate colors such that apart from things like areas that were obviously wood and various details like the color of running lights, one could almost just give the tugboat a coat of Dul-coat and call it done. THe car float is going to get a coat of grey automotive primer, ( the rails are already masked off withj thin strips of blue painters tape. This will at least lessen the amount of cleanup necessary.) I also picked up a pack of 18" radius 1/3 size sectional track to get the various sections of track positioned properly with regard to the car float apron and the dock area. MY son has promised to create the basis for a lighthouse which is planned for the area around the end of the dock in my plan for the addition. We will see how everything will work out once I get the benchwork constructed and in place.

My Son in Law Gabe came down today to help the old man and he did a great job. The next  4 feet have been added to the layout and the TV which previously resided here just moved down about 36" to its new home under the layout.

This looks like a complicated bit of track work and it is. Unfortunately, the Peco 3-way turnout came with a bit of a hump in it. I have been adding and subtracting all kinds of shims underneath the trackage to try to straighten it out, so far with little success. I am hoping that my pals at Real Rail, our local model railroad club will have some suggestions for me. There is a reason I call it the 3-way from Hell!! Another little quirk is that I cannot put ground throws on the three-way turnout because there are built in springs in the turnout itself. Luckily the points are easy to throw with just a finger, but still, every other turnout has a ground throw, why must this one be different! 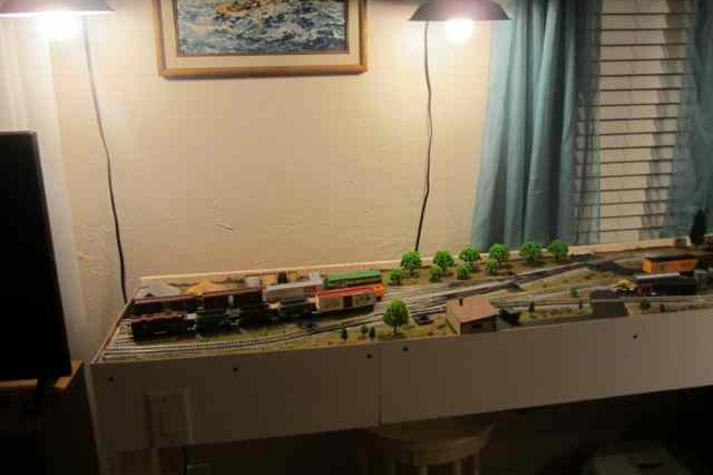 One of the things that has been accomplished while I await the benchwork which will create the next addition to the layout is to do some updating to various aspects of the layout. These range ftom the very minor, like gluing the station signs in place that I printed from my computer to fairly major, like adjusting the starting point on my original stam locomotive. MY new unit started moving at step 1 on the throttle where the older unit did not move until step 6 or 7. The fix was sort of simple with DCC decoders, just change the starting voltage for the decoder. This is CV 2 and all it took was moving the start voltage up about 25%. Now the old loco starts rolling at step 1 just like it's newer compatriot. I also took the time to paint out some white spots on the mound of coal on the sand and gravel dealer's lot. One of the tasks that got done was to initially move thje diesel fueling spot to a different part of the engine service area. THen I had a change of plan and moved it back again. THe reason for all this is that both steam locos are now modelled as coal fired, thus the need for a Coalling tower somewhere in the engine service area of the layout. The premise of the railroad has changed slightly as well. THe track to the West of the turntable was originally supposed to be where trains entered the layout. Now it appears that that track is just another part of the engine service facility. Although it means placing the coaling tower with the front facing away from the viewer, that track now looks like the ideal spot to place the coaling tower so that gondolas of coal can be unloaded underneath the tower and engine tenders can be filled on the track that leads locomotives away from the turntable. Thus all the engine service functions happen on the same track at the same time, water, fuel and sand. I am keeping track of where my latest purchases are in the USPS network so I know when to expect the packages. In the meantime I have redrawn the plan for the new addition several times, adjusting the placement of the harbor, the dock, the car float etc. This I found necessary because the position of the turnouts is vitally important to the success of the design. I have a small stash of turnouts of various types on hand and the final design will probably not be determined until I am installing them on the bench work. Meanwhile work continues on the existing portion of the layout.

This is as far as the layout can go for now and that is OK as there are lots and lots of things to do before I am ready for the next phase. I must give a shout-out to my son Steve, my sons in law Mike and Gabe for giving me all the help they have given me this past 3 and a half months. The railroad would not be nearly as far along without their very much appreciated assistance.

I finally have lights over the extended portion of the railroad. I got two identical lamps that kind of looked like they could have been found over the door to the station agent's office ands wired them both up to a switch that I installed on the front of the fascia. I plan on doing a better job of hiding most of the wires in the very near future.

Here is another view of the coaling tower. Just needs a few more HO scale people around it and it will be complete. As I get more familiar with my air brush a number of buildings and structures on the layout will get some weathering and evidence of the passage of time. I will probably not weather the locomotives much as on my layout the management likes their locomotives and rolling stock to be in neat and clean condition. Just kidding.

I painted the car float this morning and also did a bit of touch up work on the tugboat. The rails on the car float have been cleaned and most of the parts necessary for the next expansion of the layout are in hand. I ordered the necessary parts to expand the DCC system today as well.

The 3-way from Hell has been tamed. There were several problems with the track. In laying the track in across several different materials a dip in the track was induced. Proper shimming of the track cured that. Next I found that one of the four sections of short curves used (the one in the center of the picture above) was out of gauge by a fair degree causing the wheels of the locomotive to fall in and derail. That section was replaced with a short section of flex track. I also filed and smoothed the track joints wherever I could. Recent testing has shown a significant improvement. On to the ballast and structures. Unfortunately, once the 3-way was fixed another problem immediately became apparent. The left hand turnout just beyond the 3-way turned out to have problems of it's own. A check with the NMRA track gauge showed that the turnout was way out of gauge and had the same problem as the brand new 1/3 sectional track earlier on. So now I wait until I can get another left hand turnout that is in gauge. None of the ones that I have on hand will fit the space available so I will have to buy a new one. The only question is how much will it cost. Meanwhile the 3-way turnout and its associated trackage have been ballasted. There is still much left to do but I have lots of time to do it in. 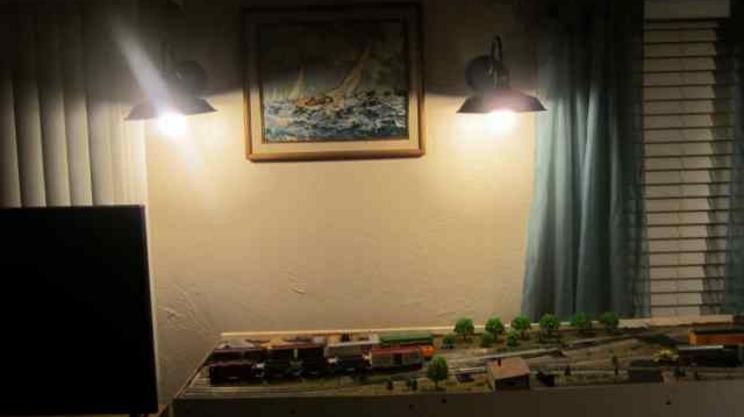 As promised the wires from the new lamps are hidden behind the vertical blinds on the left and the green curtains on the right. Much more pleasing to look at. I may have to come up with some kind of a light block for the front of these lamps but time will tell if they are going to be really a problem. We shall see.