A road has been constructed to the dock across two sets of tracks using spackle compound. The ground cover at the west end of the layout has been installed and I am just waiting for a suitable building at the beginning of the Port section to finish the ground cover there as well. I added short pilings at the west end of the dock as well. Another task that was taken care of was shortening the east end of the apron to the car float barge by about an inch and adding more ballast to take up the gap. This will allow trains continuing to the present end of track to continue unimpeded. Pictures will follow once I get the ground cover done. 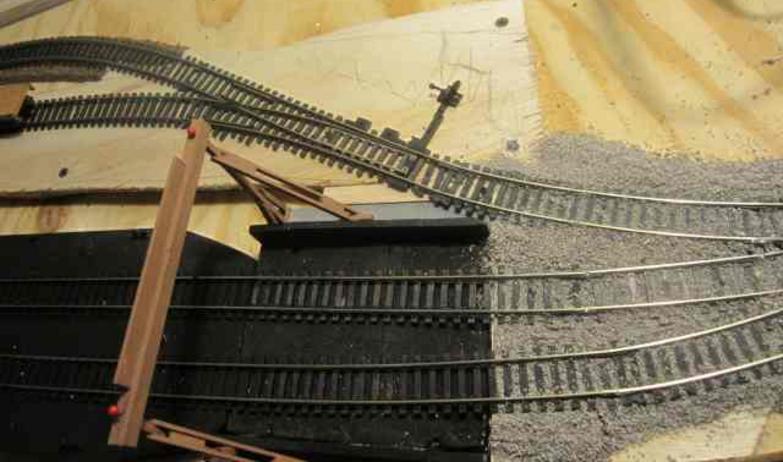 Today I went down to the model railroad club and found a suitable turnout to replace the missing one on the layout. It is brass rather than nickel silver so I will have to clean that bit of track more often, but it fits the space nicely and went in with few problems. The trains seem to behave with the new turnout so I guess work can continue. 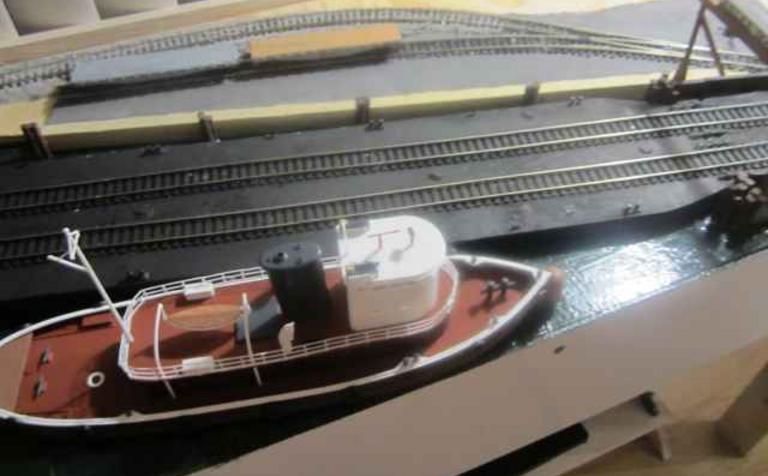 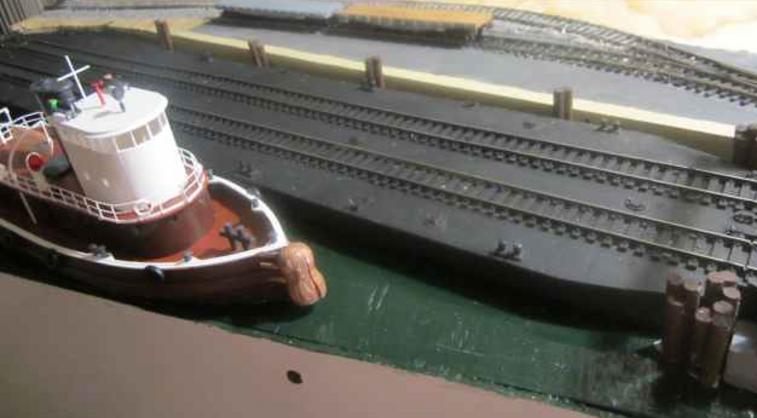 The three photos above show the progress we are making on the port area. THe dock has been faced with "concrete blocks of a massive size"  The water area has been coated with at least 3 coats of gloss medium and actually does have the appearance of harbor water (sort of). I plan on experimenting with white glue to create small wavelets on the surface. I have also added 10 3 piling sets along the dock and around the car float apron to provide stability for the car float. THe tug has not yet been glued down but it soon will be. I also cut away the fascia to the waterline on the front and side of the scene. All of the track has been tested for gauge and proper operation as well. I have not actually had to run any feeder wires to the track on this section as I soldered all of the track sections together and have had no dead spots at all. I will be running the track power bus wires through the benchwork so I can connect the lift out section when that becomes necessary. Now to add buildings and a lighthouse to the scene and finish the ground cover at the back of the section.

The ground cover is in as far as I can take it for the moment. The boards have been placed in the grade crossing but I have not painted them yet. Maybe later tonight. I think I am going to add some wood to the top of the front edge of the dock but I will have to paint the boards for that before I place them. Work continues.

Well, that didn't take long! I figured I would show off my ballasting work a bit. I know it is not as neat as mainline ballasting but this is basically three tracks very close to each other and on a variable surface. I can clean up the edges when I put down the ground cover which will be coming soon. I am still figuring out how to finish the dock area and also the water area around the car float and the tug boat. All in good time. One thing is for sure, I will not be using resin pouring to create the water. You can clearly see where the missing turnout is supposed to be. I will replace it soon. 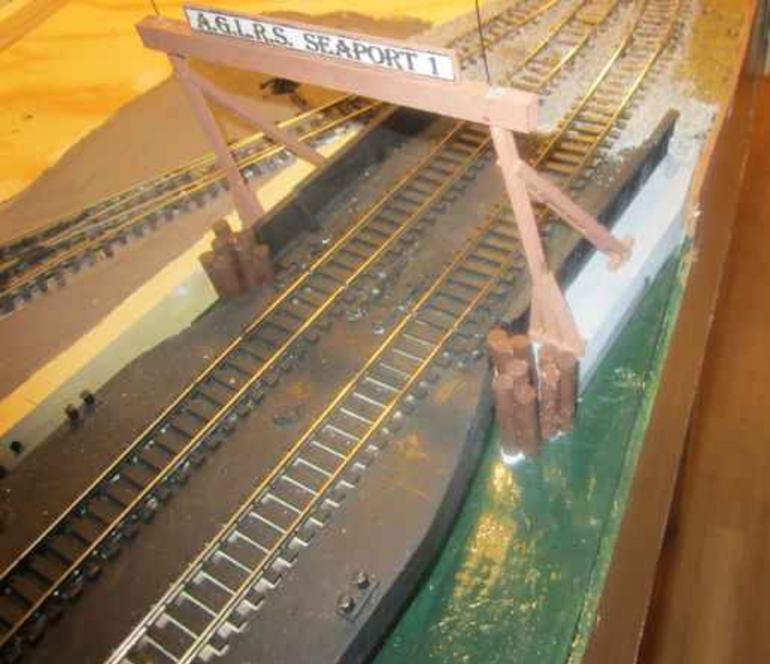 These two photos show the latest addition to the layout. A second throttle and another jack to plug it into. From now on I can leave the original large throttle in place on the front of the original section of the layout and operate using the smaller throttle which I can disconnect to go from one part of the layout to the other while the engine chugs merrily along.  The original throttle or Power Cab was on a 7 foot flat cable that cannot be extended or replaced. This new UTP panel and cab will allow me to be right where the action is taking place at this end of the layout so I can keep a close eye on the movements of the train. Now to get busy on the scenery on the new portion of the layout. 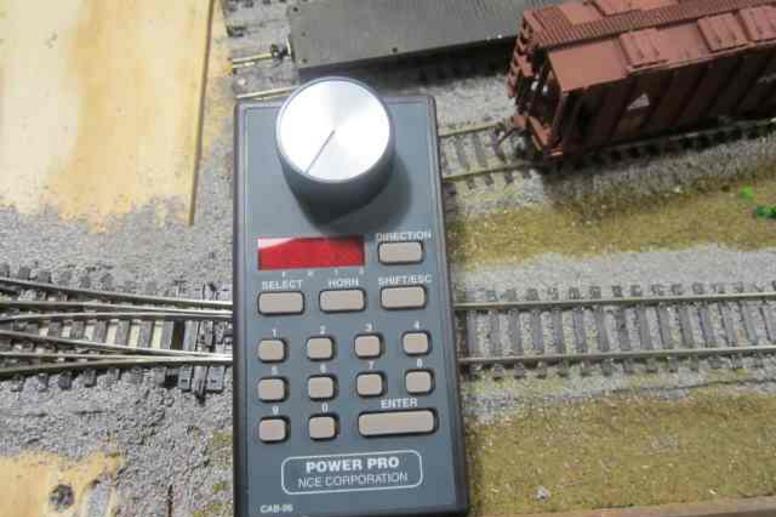 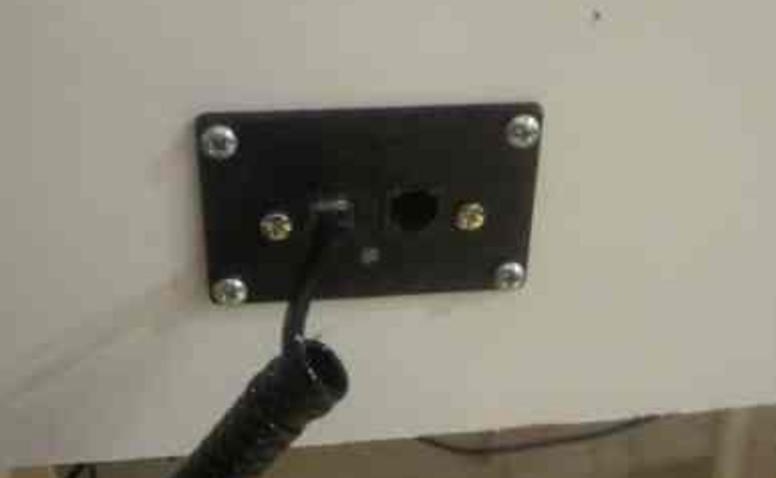 The first two coats of the green I selected for the water area on the layout have been applied. I have also installed a strip of wood along the edge of the dock. This has been carved to resemble large concrete blocks and a first dose of spackle compound has been applied to fill the irregularities in the edge of the dock surface. I will have to buy more as the small container of spackle I had on hand has kind of gone off and is not suitable for what I need. In the back of the picture you can see that the rest of the ballasting has been done. Over the top of several coats of the green paint I am going to apply a couple of coats of gloss medium and then some stippling will give it the look of flowing water, I hope. Another task I am planning is to notch the rails where they cross onto the car float. I will not cut them all the way through but just notch them to give the impression of separation. If you look carefully you can see the four clamps that have been installed on either side of each track where they cross onto the car float. In the real world these are used to clamp the barge to the apron so that nothing can mis-align the tracks. On my layout in 1/87 scale, they are of course only decorative. Also you may notice that the sign is missing from the tops of the vertical beams on either sie of the apron. This was deliberate as it was getting in the way of the work I was doing at the time 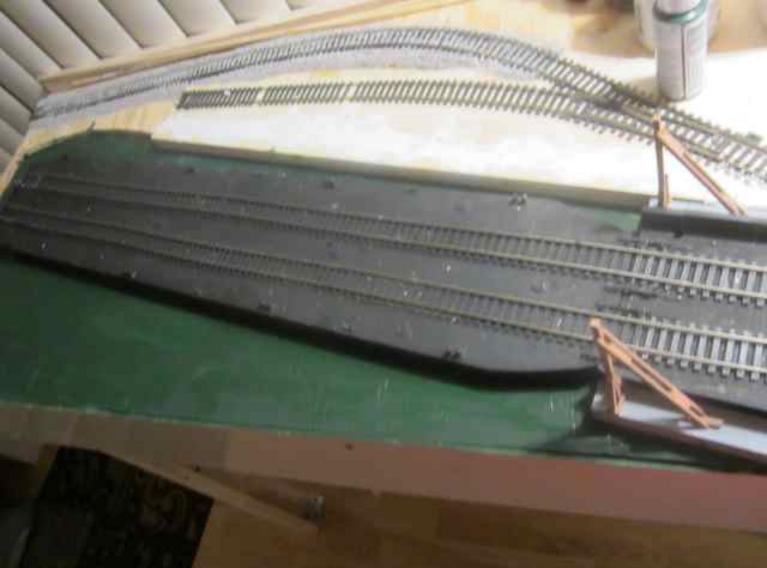