The Hayes bumpers have been added to the ends of track in the Museum Yard. That completes the track  work for the addition to the layout. Still to come; more people, more signage and more detail.

This is the latest arrival. It came on the same day as the Dewitt Clinton but was unpacked second. This is a small diesel switching loco that is normally used by a large industry that has a need for it's own motive power.

The turnouts to replace the discarded ones have arrived and been installed successfully. The ground throws likewise are installed and painted. The next task will be to paint the bases for the ground throws black and then we shall begin the ballasting process. Because this area is so visible, I plan on taking more time to get the ballast just right. Some more of the stuff I ordered may come as soon as tomorrow, we shall see. I have said before that I was impatient and tonight proved once again how true that is. I have begun ballasting the three tracks of the new yard. I am taking it slowly so I only have done about as far as the spot where the hot glue gun is in the photo above on all three tracks. Tomorrow is a day for the Model Railroad Club so I probably won't get much more done until Sunday. Work/Fun when will it stop!

As you can see, I have started on the ground cover at the restoration shop end. I still have the yard end to do but it is getting late so I will do that tomorrow. Still to come will be bushes and trees. The interior floor of the restoration shop/engine house has also been painted. Still to come is a bit of spackle to get the road over the tracks (bottom right corner of the photo). 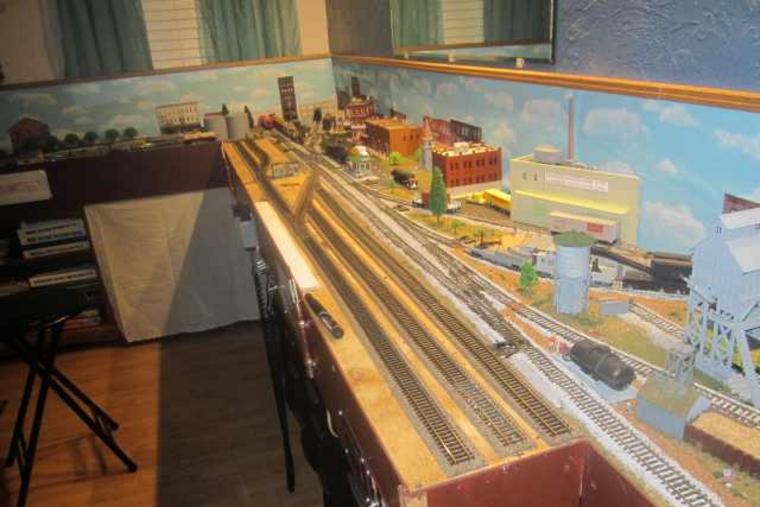 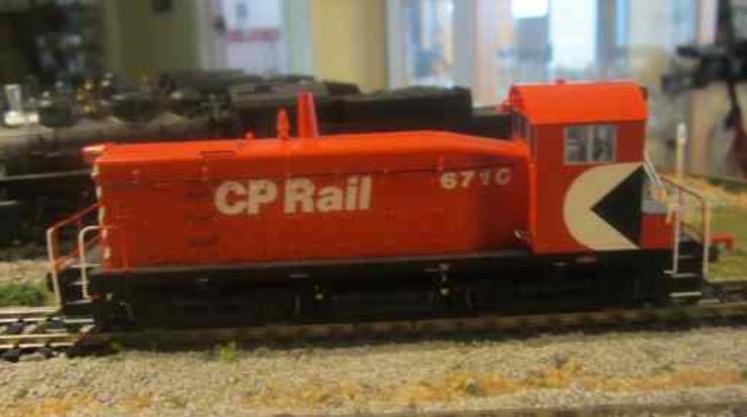 The new trackage has been installed along with the cork roadbed. Next comes the ground throws for the turnouts and wiring each of the three tracks at this end to be controlled by the switch panel that I installed on the new fascia. Several of the trains that will be displayed on these tracks are DC only so it is important that they are protected from the DCC signals and power. Scenery will come in due time but there is a lot to accomplish before we get to the fun stuff. Well, that's not quite true. It's all fun stuff. Well maybe not all of it. This morning I though all was well with the track I laid down last night. NOT SO! I have had to replace two of the no name turnouts I got from the club with the expensive ones I had to order from Midwest Model Railroad. They were very nice. I had already ordered one from them via ebay and then discovered a similar problem with a second turnout. So, until my turnouts arrive, the right hander at the front of the layout and the left hander immediately above it have been discarded and there is no connection to tracks B and C nor to the restoration shop that will be going in at the far end. All of the track has power but the turnouts were just awesomely awful.

I spent the today (Tuesday) at the Real Rail Model Railroad Club in Bradenton. I am a member there and today I got involved with one of the things that the club does to add to the coffers. One of the members designed a neat little circuit called a multilighter. It handles crossing signals, traffic lights, a welding scene and many other functions all at the same time. Other club members were stuffing the PCB with resistors and I was soldering them onto the board. It was a really neat experience and one that I am sure will be repeated.

On the home front I got a few more things done on my layout. The curtains are all back up on Phase 1 and three of the turnouts now have their ground throws installed and painted. I have also soldered all of the rail joiners that are in their final positions and resoldered a couple of feeder wires that I apparently failed to solder properly previously. All of the stuff that I ordered has either arrived or is on it's way according to the Post Office. Scenery will not be started until I am satisfied with the operation of all of the new track. There probably will not be much to the scenery anyway, maybe a few trees, but mostly ground cover, paths and ballast. Maybe a small parking lot for the museum visitors. 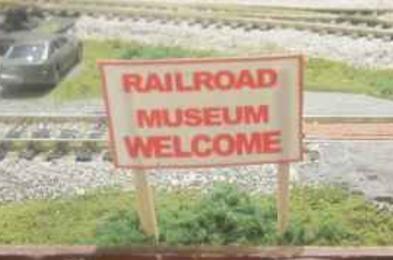 The ballasting of the new trackage is done! The Restoration Shop/engine House is also done for now. Tomorrow I will probably paint the cork under the building a concrete gray color along with the ties inside the building. I don't plan to detail the inside of the shop to any great degree. Also tomorrow will come ground cover and foliage. The work/fun continues.

The three truck Shay locomotive and the Erie Box Cab have been temporarily moved to the restoration shop.

The Box Cab.needs a new bell and the Shay looks better with it's cylinders facing the viewer rather than away from them. On Wednesday I added a few people around the gift shop and ticket counter and also along the storage tracks down by the F-7 display. 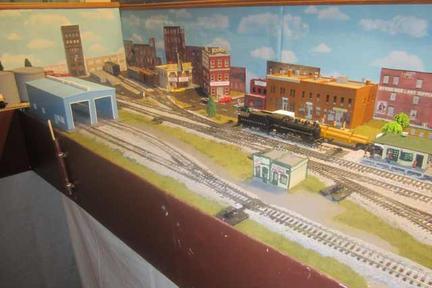 With the addition of ground cover on this end of the addition, the initial stage of scenery is complete. Still to be added are bushes, trees, paths, people and other small details. As you can see, the museum trains have been moved to their new home. Still awaiting the Dewitt Clinton which may arrive today and a CP diesel industrial loco to add to the fleet. 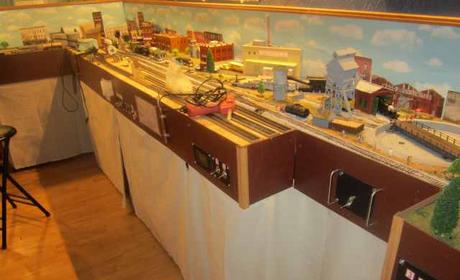 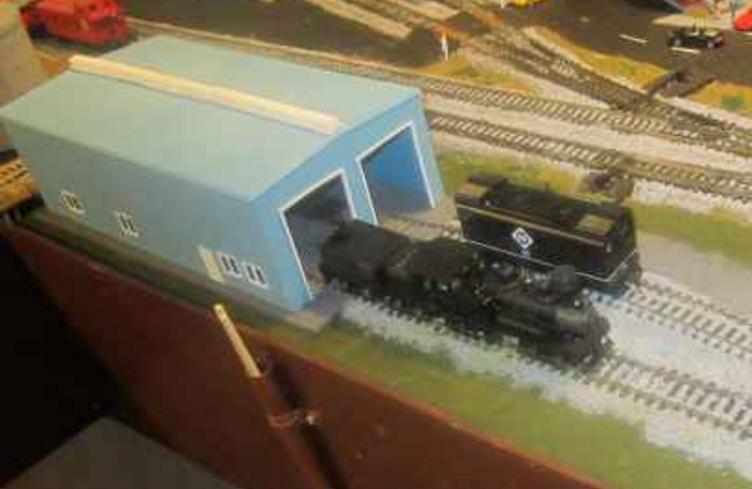 Ballasting has proceeded in a fine fashion. There is only the lead to the resoration shop to be done and the other side of the yard ladder. All of the ground throws are working and none of the turnouts got frozen with glue. I am taking it in an easy manner, this is 2 days worth of work. Well I did also assemble the restoration shop today. I also created a bit of a foundation for the shop using cork roadbed to raise the building about 1/4" THe ballast will cover all of the exposed cork and i plan on creating a "concrete" floor inside the structure.

Here is the latest addition to the locomotive roster. It is a Proto 2000 SW-8/900 from Walthers. When it first arrived on Saturday It caused a minor glitch in that it worked fine out of the box but once I plugged in the proper decoder address it stopped working entirely. No sound no movement no nothing. I sent an email via Ebay to the vendor who emailed back that they would have their expert email me about the problem. On Tuesday I took it down to the club layout where my friend Dave put it on the programming track and discovered that somehow the address had become corrupted so it would not answer to 6710 because it showed an address of 6799. OOPS!!!. Once the address was corrected to the correct 6710, of course the loco performed brilliantly. Amazing how fat fingers can mess you up.

A shot of the curtains once again in place under the layout, hiding all the wires and storage drawers. Believe it or not the curtains leave only about a 6 inch gap down by Phase 2. I installed the velcro panels with hot glue which for the moment seems to be working well. Time will tell. I have also sanded thje edges of the cork roadbed to get rid of the lib that always results from splitting the cork to get the right and left sides. I will not do the ballasting until the track is completely installed and checked. Need I say why? 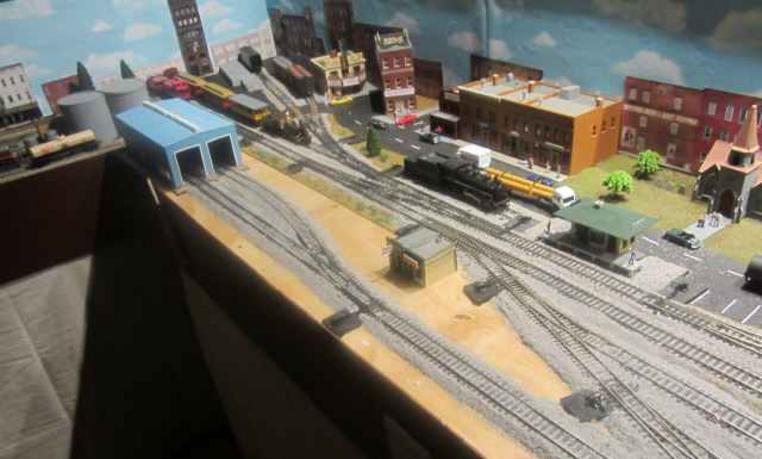 I have decided to leave the bell in its original brass color since it is a very detailed casting and any painting of it would hide some of that detail. I appologise for the dust on the model but it has sat on the layout for several weeks.

The Dewitt Clinton has arrived and is the oldest railroad train in the museum. 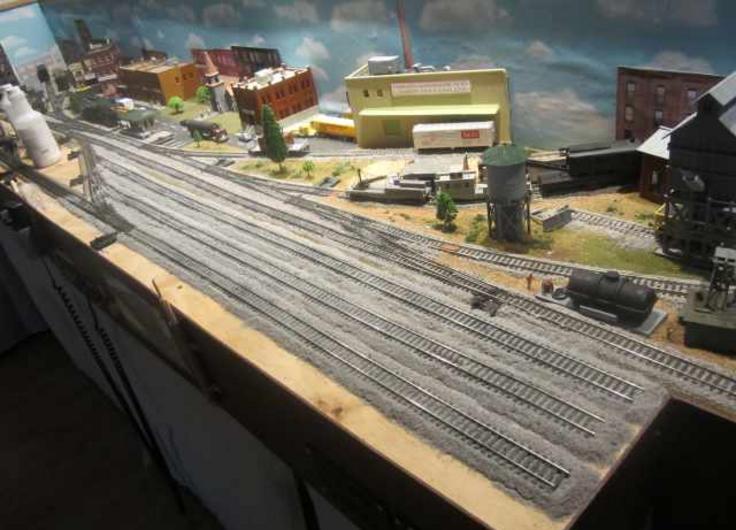 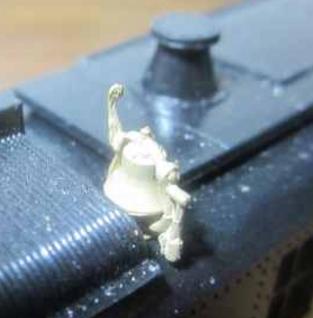 The bell I ordered from Precision Scale arrived today and was immediately installed on the Box Cab. The locomotive looks much better with a bell from the same era than the one that was on there before, which was from the late 70's at least. 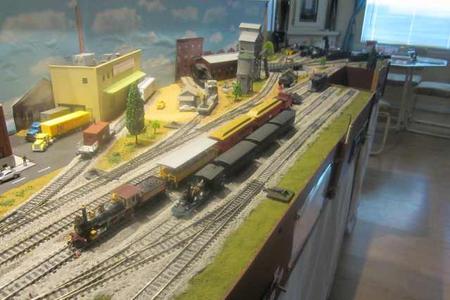