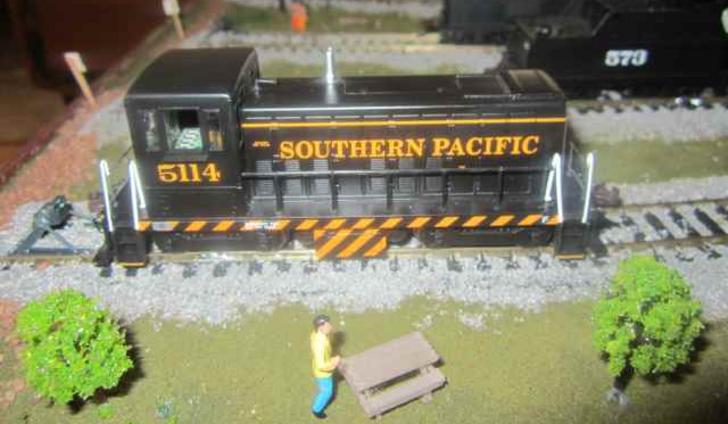 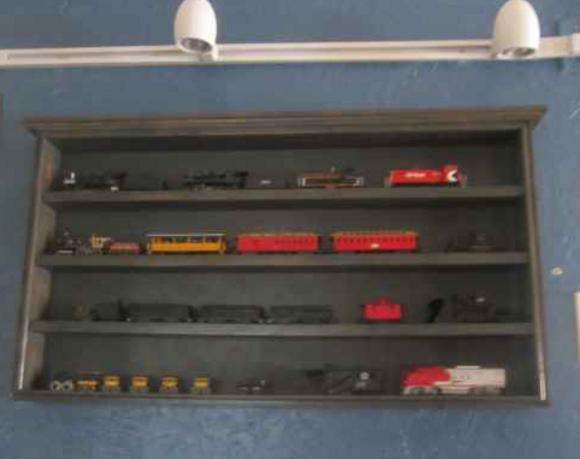 This is an early Birthday present from my youngest daughter and her husband. Gabe has turned into quite the woodworker. I gave him a few measurements a few weeks ago and he came up with this. It even has slots cut in the shelves so that the wheels of the trains sit properly as though they were on tracks. I was overjoyed to recieve this wonderful gift. Of course this means there is more space on the layout for new stuff.

Speaking of new stuff, The semi-tractor and trailer that I ordered from a hobby shop in the midwest has apparently been mislaid by the Post Office. Is it any wonder why Fedex and UPS are doing so well financially while the Post Office is always broke. I am sure it will arrive at some time in the future, lets just hope it is while I am still alive. UPDATE: After the dealer went to the Post Office and inquired about the missing package, wonder of wonders, it was suddenly found and as of Thursday morning, is now in Tampa on it's way to me. Waddyaknow!

Well, The tractor/trailer arrived today. The cab unit is gorgeous, just what I expected. Unfortunately, the trailer "kit" arrived minus a couple of parts that were desperately needed. I contacted the company and they were very appologetic and promised to send the mising parts ASAP. In the meantime, I found a lo-boy trailer on Ebay that was not a Kit and ordered that and it should arrive about the same time the missing parts do. I did make an effort to test the kit parts that I had and the term "kit" is a bit of a misnomer in this case. The parts that I have will take a tremendous amount of filing and fitting before they are even ready to be painted. THe trailer I ordered today will arrive ready to roll. I am quickly losing my taste for "kits". From now on I will concentrate on units that are ready to run.

Today is Monday, the 19th of October and another locomotive has arrived on the layout. The latest addition is an 0-6-0 tank locomotive similar to the 0-4-0 loco I purchased recently. The big difference is that this one comes with DCC and sound already applied. The new loco will become part of the roster while the little 0-4-0 will be a static display mounted on a lo-boy trailer shown heading to it's next stop on the museum circuit. I will take the new arrival to the club on Tuesday to get it checked out and have it's address changed. I am still having  a devil of a time trying to create the proper decals to identify these locos with the TV program "Have Steam Engine-Will Travel" I may have to get a pro decal maker to assist with this effort.

By the way, I almost missed the first anniversary of my layout. I started building it on October 4, 2019 so it passed it's first birthday a couple of weeks ago. For a layout that covers the circumference of an are a12.5 feet x 17 feet, having it fully scenicked and operational in around 1 year is pretty darn good, if I do say so myself.

My latest aquisition is a locomotive, no suprise there. It is a model of a GE 70 ton diesel switch engine and there are still plenty of the real ones around working at large industrial sites and steel plants and the like. Mine is currently lettered for Southern Pacific but that may change down the track. Here is a photo of the new arrival.

The photo above is of the latest aquisition for the locomotive fleet. I picked this one because I have been watching a show on my streaming TV about a father and son team who own four of these little 0-4-0's and truck them around the country to railroad museums who want a taste of steam railroading. The little  loco is haulede around on a Lo-Boy trailer with the crew following in a motorhome. So far they have been to 26 different museums in 14 different states from Florida to Connecticut and as far west as Nebraska, I think. It is a great show and since Life-Like made a model of the so called "Saddle Tank Locomotive" I thought I should have one in the collection. I plan on decorating it to match the one in the show. I might even, down the road, get a Lo-Boy trailer and rig in HO scale and make it a complete thing. The work/fun continues.

There has not been much activity on the railroad the last couple of days. I have to wait until Saturday to take my latest loco to the Real Rail club so I can get the address changed to the number on the cab of the loco. When I try to do it on my programming track something always goes belly up. In the meantime I rediscovered a couple of people loading platforms that I had made for the excursion train, so I reinstalled those on the layout. I may yet move them again but for now they are not sitting in the Yard Office Parking Lot over by the car float area. I may do some detail work on the layout tomorrow but first I do have to go shopping for a few items that will not wait until Lisa, my daughter, does the shopping on Monday. She has been very helpful, I think it is me going through stuff faster than I should.

I am not sure what is going on with my NCE power cab. It is now only used with my programming track but for some reason, I have to take any new locomotive with DCC to the RealRail model railroad club to get the programming to work. The loco above is just the latest that required using the club's programmer to get it to operate properly. While it was in Dave's hands he also did a bit of lubrication on the gears which immediately quieted a rather noisy locomotive. No sound on that one but at least it is much much quieter than before.