These two pictures show each end of the cable. Both ends of the white cable have male RJ-12 EZ modular connectors. The black "pigtails" have a female 3.5mm mono jack at the control head end so that one can plug in an external speaker. The other "pigtail" has the male 3.5mm plug which is plugged into the external speaker jack on the back of the radio main body. This particular example is made from a 15 foot Cat5e cable which after modification is about 14 feet 6 inches long. The stock Yaesu cable is around 20 feet long and so you can start with whatever length of Cat5e cable you require. I have also used Cat6 cables as well without any problems. 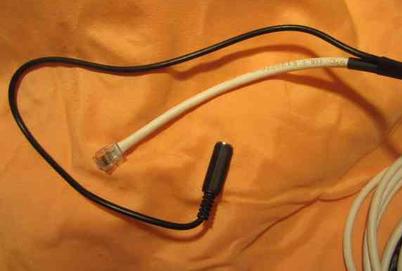 A Separation Cable for the Yaesu FT-7900R And Similar Radios

My solution was to combine both functions into one cable. A Cat5e cable of suitable length (it does have to reach from where the main body is mounted to where the control head is sited). The Cat5e cable has 8 conductors in 4 pairs. By slitting the outer sheath at about 9 inches from each end for about 1 inch and removing the RJ-45 connectors from both ends, it is possible to relatively easily pull the brown/white and brown pair out through the slits. The application of a couple of properly sized pieces of heat shrink will seal up the slits.

The next step is to pre-install two more pieces of heatshrink further up each end of the Cat5e cable. These will be used to cover the splices where the audio pigtails are soldered to the brown/white and brown pair of wites. Obviously this pair will be shortened considerably when the mono audio pigtails are soldered in place. In order to avoid having to use even more different sizes of heatshrink, I place the "hot lead solder joint to the rear of the junction and the ground side forward of the junction. Then the pre-installed heatshrink is slid over the juction point to secure the "pigtail" to the Cat5e cable. The next step is to install the mono plug and jack. The plug will go on one "pigtail" and the jack will go on the other.11

Once this is completed, it remains only to install RJ-12 EZ modular connectors at both ends. Make sure that each set of wires is installed in the RJ-12 EZ in the same order. I used the standard order of Cat5e cable:

The orientation of the modular connector is tab up looking at the back of the connector with pin 1 at the left side of the connector. the wire color should be orange/white at pin 1. I highly recommend EZ modular connectors simply because installation of each individual wire is so easy. Simply strip the cable back about 1 and 1/2 inches and straighten each wire separately. No need to be too fussy about this step. Then insert each wire into it's appropriate position. Since the wires go completely through the connector it is easy to verify that each wire is in the proper position. Once all the wires are inserted, use a modular crimper to crimp the contacts into each wire. Once you are satisfied with the crimp the excess wire that is sticking out of the nose of the modular connectoris simply cut away with a utility knife. There is even a small ledge under the point where the wires protrude to make cutting off the excess easy. 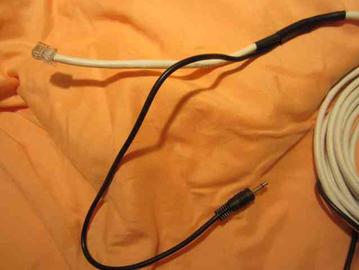